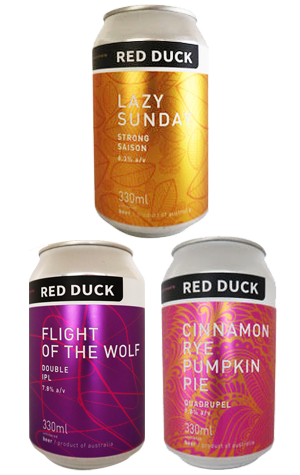 Like most of their peers, the folks at Ballarat's Red Duck have been far from idle during Victoria's lockdowns; how can you be when you run both brewery and distillery? They've emerged from the second shutdown with a new look core range and, in keeping with the DNA that saw them innovating wildly well before most local breweries existed, they've got a trio of new beers out ahead of summer.

The most summer suited of those is Lazy Sunday, a strong saison that joins a long line of Belgian-influenced beers from Scott Wilson-Browne. It's definitely "influenced" as you wouldn't find many Belgians adding Lemondrop, Calypso, Cascade and Mandarina hops to a saison; that said, it's fairly line and length in character despite the New World hopping regime: honey biscuits, citrus rind, clove like spices and a drying, peppery underbelly. It's fragrant, full in body and only mildly funky.

Flight Of The Wolf is a double India pale lager we're told has been hopped four times with experimental Kiwi hop four times with NZH-107. It's a variety said to give brewer and drinker intense tropical and citrus elements to play with; here, while it's far from explosive on the nose, 107 does conjure memories of the cartons of kids tropical juice from pack lunches of yore when it comes to the taste. Sweet, biscuity malts help carry the 7.8 percent booze content, while the bitterness slowly settles in to claim “India” status.

Red Duck return to Belgium for the third in the trio, albeit with a detour via the US for Thanksgiving celebrations. Cinnamon Rye Pumpkin Pie is a rust-coloured, spiced Belgian quad weighing in close to 10 percent ABV that sounds like a mouthful in every way – and pours forth so much spice on the nose, particularly cinnamon and anise – that you expect to be overwhelmed. Yet take a sip and it all falls into place, like a Northern European Christmas market spiced baked treat laced with dried fruit, accompanied by a mulled drink, and as slowly warming as that sounds too.