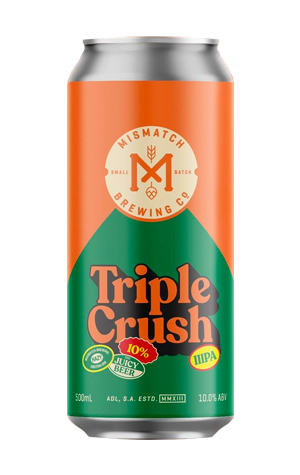 It's not as if Mismatch haven't released big beers before. The SA brewer's Bourbon Barrel-Aged Russian Imperial Stout, for example, was one of the very best dark beers of 2020. Yet, when it comes to their hop forward beers – both core and one-offs – I tend to think of them as masters of delivering flavours and aromas in a crystalline, finely-honed manner, not as purveyors of double figure booze content hazies – beers that typically make a play of their voluptuousness and olfactory-obliterating excesses.

So what happens when they try their hand at such a thing – one whose fruit sticker-inspired design flourishes promise "HAZY" and "JUICY BEER" in all caps? Let's find out...

Unsurprisingly for such a consistent brewery, Triple Crush retains the Mismatch character as best it can when it comes to keeping the 10 percent ABV and florid hoppiness as contained as one can at such extremes. Hazy and pale gold without tipping into cloudy / turbid territory, it's citrusy in the sense of an orange 'n' lemon reduction you'd pour over a dessert – or a citrus sponge, perhaps – with the booze contributing an anchoring depth and a little spiciness to proceedings, plus a warmth to your noggin. Bitterness is barely there, yet it avoids the flabbiness you can find in such beers, making it worthy of becoming your next crush.