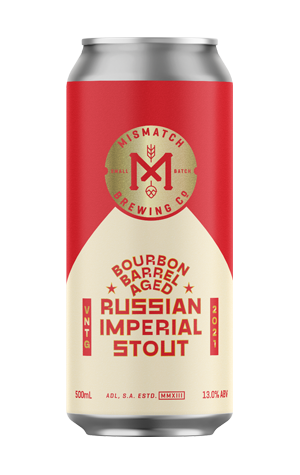 In 2020, Mismatch released their first Bourbon Barrel-Aged Russian Imperial Stout, an outstanding beer that picked up its fair share of silverware. Now it's back, albeit in slightly different form. Sure, the 14 Buffalo Trace barrels haven't changed but the 2021 version has a toned down ABV – albeit still sitting at a tidy 11.2 percent ABV – and, while the original version dripped with bourbon, here that is dialled back a touch, resulting in a rich, complex, balanced beer. The limited release also been supersized into larger 500ml cans.

Pitch black is an understatement then it comes to the beer's appearance: pouring a thick, opaque, jet black with a fast-dissipating chocolate brown head, on the nose there's a decent whack of bourbon, adding some sweetness and a little vanilla amid some well-disguised roast and a smidgeon of molasses. It pours with a thick, syrupy, super viscous body in which the bourbon remains big on the flavour front; the molasses comes through more prominently too, followed by more roast, vanilla and dried dates. The outcome is a RIS that's silky, rich and incredibly decadent, with a lingering, bourbon-tinged warmth that wraps things up nicely at the end.