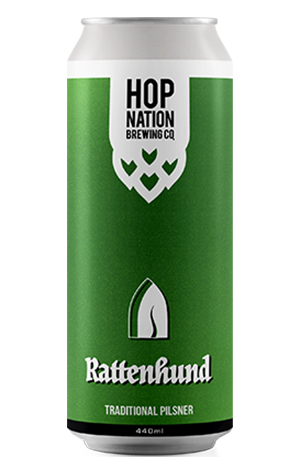 Hop Nation regularly release experimental beers that explore the directions in which hops, malt, yeast, bugs, fruit, barrels and basically any other ingredient can take beer. But, when it comes to exciting this beer writer, a good way to go about it is by releasing a traditional pilsner and sending over more than 400 words explaining the way the brew team went about making it. As is often said, pilsners are brewer’s beers and, in the case of Rattenhund, there’s clearly some excitement within the Hop Nation team.

We won’t go into quite as much detail here about the process of bringing the beer to life but we will say it features floor-malted Bohemian pilsner malt, acidulated malt, Perle and Spalt hops, Pilsen yeast from local operation Bluestone, fastidious water and temperature manipulation, and eight weeks of lagering time.

The result? A stunningly bright and golden beer with a fluffy head and a lean and crisp body. The flavours shift from bready to minerally, with floral, woody and very light citrus characters all present but subtle and softly switching between one another. I took one to dinner with some friends and the response was universally one of: “That was delicious but it was gone before I even thought about it.” Followed by: “Did you bring any more?”

Oh, and the Rattenhund name? It stems from one of Hop Nation’s brewers introducing his Italian greyhound to co-founder Duncan Gibson, who thought looked like a rat. Welcome rat dog, you’re a classy creature.