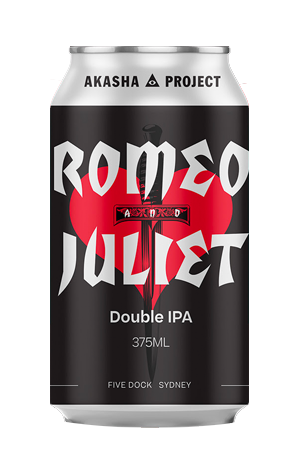 Bloody Romeo and Juliet they reckon? A marriage of Montague and Capulet? In this economy?

Akasha, reaching the very height of audacity, have endeavoured to bring West and East together in holy matrimony with their newly released double IPA. But how can one conjoin these two bitter enemies? I guess only one of them is bitter, the other is sweeter and more tropical hop focused, but you get the idea.

Can Akasha be the ones to stop this senseless bloodshed on the mean streets of Verona? Will six people have to die before peace can be achieved? Should I ask less insufferable rhetorical questions and just write about the beer itself? I guess we will never know.

Romeo and Juliet pours a sort of opaque gold. Not clear nor overly hazy, just a bit in between (ohhhh, I get it). From the get-go I’m getting a powerful Golden Circle popper vibe with huge mango, pineapple, peach and orange juice with a touch of dank pine lurking in the back.

This continues on the palate with tropical hop compounds and a malt body that gives the initial impression there’s going to be sweetness, but it simply disappears leaving just a hint of alcohol warmth. There’s very little apparent bitterness too, but I found the bitterness slowly builds and lingers for a while. I genuinely didn’t know what to expect with a West Coast/East Coast mix but, essentially, you get a massively hop forward IPA that’s neither particular bitter or sweet.