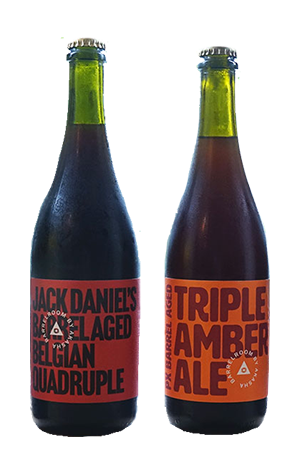 If you're a regular reader of this site, you'll know Akasha opened a second venue in spring 2022 – The Barrel Room by Akasha. It's designed in part to showcase their barrel program – it's the only place you can buy their barrel-aged beers as things stand – and also a venue promising high end drinks (and pizza) across the board.

When we called in ahead of opening, we nabbed a couple of bottles of the first two beers to be ready (if you swing by now they're open there's a Sour Blonde and Wee Heavy pouring too). The pair we came home with are both very much in the big and bolshy category too, with the Jack Daniel's Barrel Aged Belgian Quadruple seemingly attempting to pull all the lavishness the two liquids possess separately together as one. Every mouthful brings those rich raisin and banana and fruitcake and flat cola and milk chocolate elements you find in a quad, augmented by a top note of vanilla and bourbon sweetness. There's a little tannic dryness lurking within its lovely, full 'n' soft body too, attempting to keep the wave of lusciousness somewhat grounded.

With PX Barrel Aged Triple Amber Ale, the brewers took some of their Triple Fire Amber Ale released in autumn and gave it time in ex-Pedro Ximenez barrels they secured from Piggs Peake Winery in the Hunter Valley. Again, there's plenty to get stuck into: fruity and sweetly malty like a sticky toffee dessert swirled with thick berry / plum jam. You can still tell the OG beer was highly hopped, especially to taste, with some ripe citrus clinging on and the bitterness ensuring it manages to finish pretty dry. Big, sticky, boozy, fruity, malty and aromatic, it reminds me of an American barleywine, albeit on the leaner side.