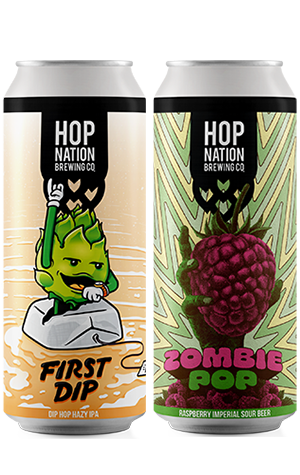 They’ve made plenty of hazy and sour beers at Hop Nation but spring 2021 has seen the brewery try their hand at some new approaches.

First up is the brewery’s take on an emerging technique called dip hopping with First Dip. You can read more about the approach to brewing here but, in essence, it involves blowing off certain hop notes – particularly myrcene – while allowing others to stick around. In the case of Hop Nation, they’ve used the popular Strata, Mosaic Cryo, Citra Cryo and Galaxy hops to create a 6.96 percent ABV hazy IPA, which is just the kind of hoppy, hazy territory in which the brewery likes to play. The pale yellow and opaque beer hits first with what’s quite a gripping, almost tart hop bite and, as your palate gets used to that assault, what's left behind are clean floral, grapefruit rind notes and some further flavours of fresh pine needles.

Then, in a time when Melbourne’s not only seen skyrocketing COVID cases but also earthquakes, the brewers have also shown a preparedness for a form of the apocalypse that might hit next with Zombie Pop. While you could think of it as fuel to help fight off the undead, you could also consider it a pumped up version of their Fool Raspberry Sour; this beer uses double the fruit purée compared and sits at 8 percent ABV. Along with their lactobacillus culture, they've also added lactose and vanilla to create a beer that's rich, thick, tart and dessert-like, while also filled with fresher notes akin to raspberries from the punnet.