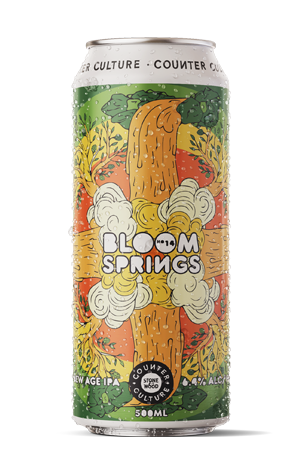 Counter Culture is up to release number 14 already, eh? Well, I never. Doesn't seem that long since I was sneakily making tasting notes for Killer Kween in a mate's back garden, hoping nobody at the 50th birthday party would notice the imposition – or at least not cast me as some sort of beer weirdo given this was a family affair populated mostly by people well outside the beer bubble. The lengths we go to for our jobs, hey...

It's also the first brewed since Stone & Wood's founders agreed to sell to Lion / Kirin and doomsayers will be disappointed to hear Bloom Springs is up to the Counter Culture series' usual standards, even if a "New Age IPA" – a hazy featuring funky new hop forms – isn't as boundary-troubling as past releases. Those hop forms include a couple you'll likely have seen around before – Lupomax (highly concentrated hop pellets) and Incognito (a pourable, highly concentrated version of hops) – and the lesser witnessed Spectrum, which is a liquid hop product designed for dry-hopping late in the brewing process.

If that either reads as gobbledygook or you couldn't give two hoots how the finished product came into being, you probably only need to focus on the "highly concentrated" part as the aim here was to use such versions of the supremely fruity varieties Citra, Mosaic and El Dorado to make a supremely fruity IPA. The brewers' aim was true too, as this is the veritable fruit-salad-bowl-through-the-blender with a touch of cream to soften its edges. The finish is quenching as much as bitter, and the hop flavours are there for a long time as well as a good time. Bloom Springs eternal, I guess.