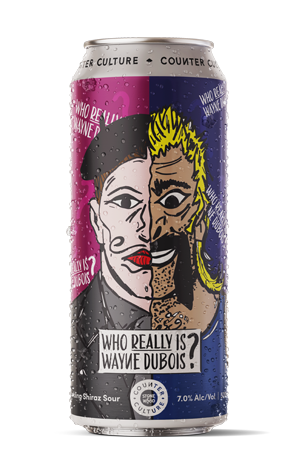 The Crafty clan has a close family friend with whom we go camping several times each year. And she is the only person for whom I've yet to find a beer she enjoys. I've tried everything I can think of, all manner of styles and many an occasion, but she knows what she likes, and she's good at it too.

For the most part, it's a pinot noir or a shiraz, either (or both) of which she'll happily sit on late into the night, only to rise the following morning as if she's not touched a drop – fresh as a daisy no matter how many glasses were consumed. It's earned her the mantle of The Machine (well, from me, at least) as just who is able to stick to red and not, at least on occasion, be a wee bit dusty the following day?

As a result, I've tried all manner of beers that sit close to lighter and fruitier reds in the hope of finding just one – just one! – she'll admit to enjoying, but to no avail. Even Rodenbach's Caractère Rouge, which I'd always assumed was irresistible to all, didn't find favour. But maybe now there's new hope...

In the warmer months, sparkling shiraz enters The Machine's fray, and what have Stone & Wood cooked up for their autumn 2022 Counter Culture release if it isn't a sparkling shiraz sour, complete with comic novel / Harvey Dent-esque label. A blend of South Australian shiraz grapes, pale, wheat and rolled malts, Tettnang hops and a combo of a shiraz yeast strain and lactobacillus, could Wayne Dubois be the secret weapon I've been waiting for?

Certainly, he possesses the vibrant ruby-crimson colour of a sparkling shiraz and those rich, sweet, almost Ribena-esque sweet berry flavours. The carbonation is lively, aiding refreshment, and the gentle sourness on the nose, plus a touch of oak that clips the sharper edges of the bracing tartness certainly add up to one heck of an approximation of a sparkling shiraz.

To be honest, my only real hope of overcoming The Machine on behalf of the beer world is to use the sort of subterfuge in which Wayne Dubois presumably specialises: hand her a glass, claiming it is in fact a sparkling shiraz. Which means I probably shouldn't have just texted her a photo of the can. Dammit, some international man of mystery I'd make...