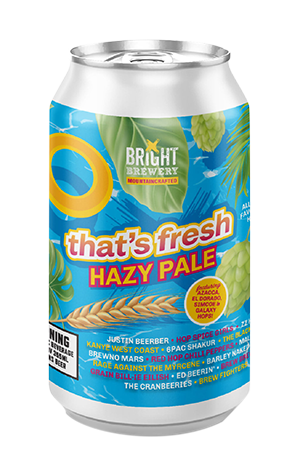 It might be hard to believe but back before everyone was sharing their Spotify yearly wraps, there was only one possible way to listen to popular music: So Fresh CDs. Four times a year these delights would be released, gracing the ears of Australia’s teenagers with the latest hits from across the world. But no release was ever better than So Fresh: The Hits of Summer because not only were you able to enjoy the latest hits but there was also an entire second disk that included songs from the previous 12 months.

At this point you might wonder why anyone would buy the rest of the seasonal releases but you have to remember that it was the only way you could possibly listen to new music – and how else were you meant to stay popular?

All of this is a long-winded way of saying Bright have a summer seasonal release called That’s Fresh; a hazy pale which both pays tribute to that era of music and the fact summer is here. Taking centre stage are El Dorado, Azacca, Simcoe, Sabro and Galaxy hops, which provide a mixtape that includes mango, pineapple, pawpaw, grapefruit and passionfruit. There’s no bitterness to this tune either, so instead the background harmony is one of a lush and soft body that helps you lean into the thought – like a So Fresh album – of hitting play again as soon as you finish.

Because we are no longer in the early 2000s, Bright and their graphic designer PocketBeagles have created a Spotify playlist to enjoy with the beer. It’s accessible via a QR code on the can but, unfortunately, I’m still using a Motorola Razr...

Bright have also given their 2.5 percent ABV Pilot a recipe tweak and new look – you can read about that beer here.