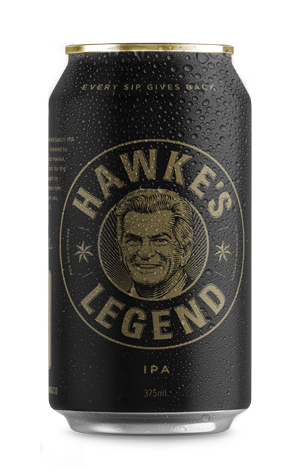 In the lead up to the last Federal Election, the passing of Bob Hawke caused the party he once led to rein in the intensity of their campaigning as they paid respects to a Labor – and Australian – great. As the big day approaches in 2022, they'll be hoping the emergence of the third Legend IPA bearing his likeness doesn't do anything to knock his current successor off track. This beer isn't just for refreshment either: $1 from every can sold will go towards funding equipment for the Communities Enhancing Tidal Wetlands project in Queensland. You can read more about that project here.

As for the beer inside the suitably classic-looking silver-on-black, gold-trimmed cans, you've got a pretty classic West Coast style IPA. There's some of that biscuity caramel malt sweetness not seen too often in these tropical hazy days (extracted from "signature malt from the Victorian farm region of Tungamah", we're told). If anything, it drinks like a big pale ale; there's fruitiness and a little pine from the Amarillo and Eclipse hops, and a balancing but not in your face bitterness, all of which leaves you with an easy-drinking IPA that sits on the sweeter side of the style.