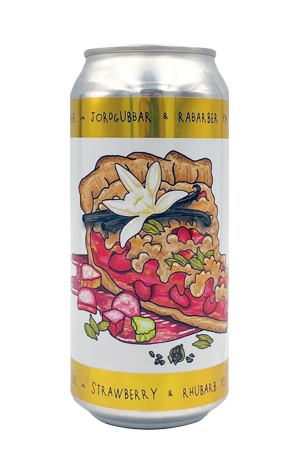 While Pint of Origin Week (or not-Good Beer Week, whichever you prefer) was light on international visitors compared to the glory days of GBW, when it came to international beers vast swathes of the planet were represented with aplomb. And at Beermash – host of Scandinavia's beers once again in 2022 – they went above and beyond and asked some of their featured brewers to create collabs with locals.

We've already written about the Edge / Omnipollo creation, and here's the one conceived by Sailors Grave and Brewski. The brewery founders first met at the Mikkeller Beer Celebration Tokyo back in 2019 and set out to create a beer affectionately known as Brewski Pie – one the Orbost brewers reckon could be the best of the very many fruited beers they've released over the years.

It's a cream sour that's significantly higher in alcohol than most they've put out too, and which employs the titular fruit and veg alongside cinnamon, cardamom and vanilla in its mission to become pie-in-a-can. It looks like a rhubarb reduction and delivers on that promise fully. Indeed, the taste is so rhubarb-y it's almost as if I can feel its stringy texture. Sailors Grave were cream sour pioneers in Australia so know what they’re doing on that front, and here there’s fruit aplenty, vanilla creaminess, a welcome tang that aids drinkability, and some cinnamon-heavy biscuity sweetness. In short, job done.