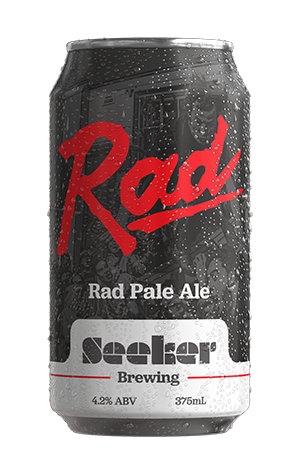 Once upon a time, Rad Bar was the place to watch live music in Wollongong. The intimate venue was raucous, fun and where the likes of Hockey Dad would get their surf rock start. Sadly, in a story that's all too familiar, Rad Bar closed in 2019 so a substantial office block could take its place. But that doesn’t mean its legacy doesn't live on and Seeker Brewing's Rad Pale Ale is part of that legacy.

The beer was initially brewed with the live music venue’s owner Daniel Radburn as a tribute to the mark he left on the South Coast’s live music scene and has since stuck around as part of the brewery's core range.

It's also a tribute to some of America’s early pale ales like Sierra Nevada’s pioneering beer, bringing together floral, earthy and piney hop notes. There’s a touch of citrus too, and while it has some biscuity malt flavours, it’s far leaner than many early pales, thereby keeping one eye on the past and another on the modern world.

Thurs to Sun: midday to 9pm

Free Seeker Middy With Your Pizza