Wollongong is a city surrounded by ample opportunities to get stuck into all manner of great pastimes. World-class mountain biking, hiking and surfing are all found within close proximity of the coastal city. And, increasingly, the old industrial hub has become a hotbed for excellent, locally-produced coffee, spirits and beer – as well as spaces in which to enjoy all such pleasures.

With the arrival of Seeker Brewing, you have a venue looking to encapsulate all of those good times: it’s dedicated to anyone seeking a life full of adventure and good times, particularly if those adventures include enjoying craft beer in good company.

Had you ventured to its location in the industrial area of Unanderra, in Wollongong’s south, prior to 2022, you’d still have found a brewery, but it would have been Bulli, which was launched by Michael Peliquin back in 2017. Meanwhile, Grassy Knoll – named after an iconic spot in Bondi – was the brewing company launched by musician Jeff Argent in 2019 that produced beers at breweries across New South Wales.

Following a move to Wollongong, Jeff started brewing his beers at Bulli, and was later approached by Michael to see if he’d like to take over the space and buy the brewery from him. Along with some friends and family, Jeff did just that, and with the new opportunity came the idea to start fresh with a brand new brewing company and name to encapsulate the local scene of which he was now part.

Having embraced Wollongong and the lifestyle it offers, Jeff, his twin brother Curtis and their cousin Ben Boorer wasted no time connecting with the beachside city and its surrounds. Many of Seeker’s beers are named after local landmarks while collaborations with local businesses are a common part of Seeker’s mission.

What’s more, true to their ethos of being a brand suited to anyone seeking out life’s adventures, they were quick to wade into the world of alcohol-free beers too, creating Maxi Small Beer – an impressively full-flavoured red ale with little in the way of alcohol. As well as focusing on lower ABV offerings, they do love IPAs, so you’re always likely to find something hazy and something West Coast pouring and in their takeaway fridge too.

The beers take shape on a 15-hectolitre system and are, of course, best enjoyed in their taproom. Venture in and you’ll quickly forget you’re in an industrial estate, as Seeker’s venue is as much cruisey games room as brewery bar.

As well as the 14 taps, there’s a 5m rose gum long slab bar designed to encourage guests to pull up a pew for a drink and a chat, plus a pool table, basketball hoop and a TV often tuned to sports. If you’re peckish, the Seeker Hut serves up Neapolitan-inspired woodfired pizzas, which will always feature at least one chef’s choice "secret ingredient pizza”.

Then there’s the regular gigs. As we mentioned above, Jeff is a musician best known for forming the rhythm section of indie band PIRRA alongside twin brother Curtis. It means live music is as much a part of the brewery’s story as the surfing lifestyle that infuses much of its spirit, meaning local musicians always have a place to play in Wollongong.

Add in collaborations with local institutions like local mountain bike clothing store, Huck the World, and the Rad Bar crew and it’s clear you’ve got a brewery that walks the walk. And, for that matter, one to which it’s worth making the trek, whether you head there via foot, bike, surfboard or Kombi van.

Thurs to Sun: midday to 9pm

Free Seeker Middy With Your Pizza

A new brewery is set to open in the Gong this weekend, except it's not quite new. Seeker Brewing sees Grassy Knoll founder Jeff Argent take over the space that previously housed Bulli Brewing for a new joint venture. Ultimately, it’s all in the name. Seeker Brewing aren’t just for anyone seeking out craft beer in Wollongong and its surrounds but are also for those seeking out life’s great adventures, whether it’s through surfing, hiking or mountain biking. Huck Hazy is a beer dedicated to the last of those: the hazy pale was created in collaboration with Huck The World, a local bike apparel store that launched in 2018. Once upon a time, maybe a lager would have been the kind of beer you’d expect bike… Read more
Pale Yellow Once upon a time, Rad Bar was the place to watch live music in Wollongong. The intimate venue was raucous, fun and where the likes of Hockey Dad would get their surf rock start. Sadly, in a story that's all too familiar, Rad Bar closed in 2019 so a substantial office block could take its place. But that doesn’t mean its legacy doesn't live on and Seeker Brewing's Rad Pale Ale is part of that legacy. The beer was initially brewed with the live music venue’s owner Daniel Radburn as a tribute to… Read more
Golden Yellow Seeker Brewing's primary mission might be to make beer but the Wollongong outfit holds the likes of live music, surfing and many other activities that often involve campervans close to their hearts. Which brings us to Mystic NEIPA, a core range beer inspired by one of the team’s favourite South Coast surf spots and designed to top off a full day by the beach. Having said that, even if you don't surf there's a lot to Mystic set to capture your attention. It's soft, pillowy and quite luscious while… Read more
Pale Yellow 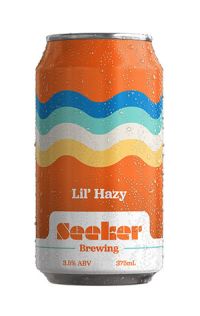 From the outset of his Seeker adventure, Jeff Argent made two things pretty clear (no pun intended): he wanted to develop some lower ABV beers that could be enjoyed while getting out and about; and he wanted to brew plenty of hazies. And, while Lil' Hazy isn't the lowest ABV offering he's put out since then, it's the core range beer that combines those two goals in one. Described by the brewery team as a small dog with big dog energy, it's fired by a double dry-hopping with Cryo Pop and Vic Secret.… Read more
Golden Yellow 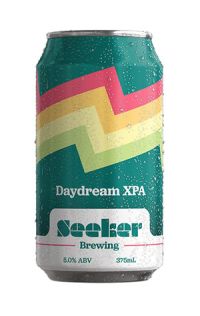 If you're used to your XPAs presenting in the manner of the country's biggest-selling version, this isn't that. Sure, it's still a reasonably pale, pretty lean, fruity beer, but this announces itself in way that's likely to stir you from even the deepest of daydreams. Crack a can and tip it into a glass and you're met first by an aroma familiar to anyone who's just picked up a fresh bag of hydro before Mosaic’s distinctive berry / blackcurrant character makes itself abundantly known – with a… Read more
Golden 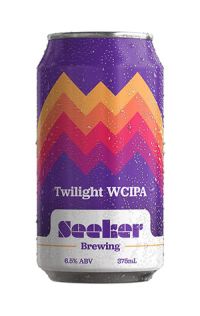 According to the liner notes, the aim with this West Coast IPA Is to capture "the magic of the twilight zone when the sun hits just right in the late afternoon". Given the brewery is run by touring musicians and surfers, they'll no doubt have experienced such moments gazing upon – or from – a festival stage or on a quiet beach, when said magic is amplified to ever greater levels. Such a classic moment is represented by a pretty classically-minded IPA. It leads off with citrus rind and… Read more
Golden Lost Palms are closing out the year with a couple of fruit sours. They describe Laid Back Beat as tasting like watermelon Chupa Chups*, and I can’t beat this description. (Actually they also said "pineapple popsicles" but I’m mostly tasting the watermelon.) It has the clean flavour of watermelon Chupa Chup, but instead of the sugary sweetness there’s a straightforward sourness and a crisp and quick finish. I want to drink it in the pool. Laid Back Beat pours a blush colour like a… Read more
Red As much as there’s a plethora of alcohol-free beers available these days, breweries are still finding ways to stand out from the crowd. Seeker Brewing have achieved that by dropping the alcohol from a beer style that few think of when they think non-alc: red ale, Maxi Small Beer. Initially, the beer came in at 1.0 percent ABV, but a bit of tinkering has seen them drop down to half that, and while it might be low in alcohol, it has well ... max flavour. There’s a blend of rich toffee and raisin,… Read more
Red It can be a little harder to get away from home in winter, but if you do make plans, head for the bush and hold onto the hope that the weather will be warm then, more often than not, it’s worth it. But even if the weather turns, a night with nothing but a campfire and a porter to keep you company can be a wonderful escape from the busy pace of normal life. Getaway Porter is a beer designed for those moments, with Seeker Brewing's classic dark ale filled with chocolate and coffee flavours alongside… Read more
Black