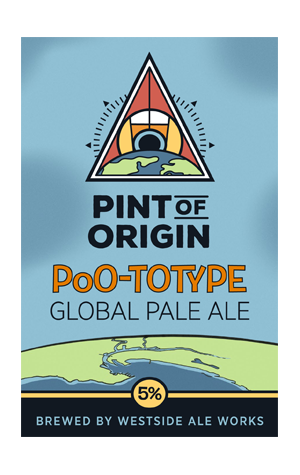 Back when we decided to go ahead with Pint of Origin after Good Beer Week 2022 was shelved, an idea was conceived to create the first ever PoO beer. In the end, it proved too much to pull off on top of the rebranding, building a new website, creating digital passports and so on, but having come up with the idea for the beer we decided to go ahead with it once the festival itself was done and dusted.

The idea was to brew a beer that represented every Pint of Origin region in one way or another, while still being approachable. So, in cahoots with Westside Ale Works head brewer Casey Wagner we came up with a recipe featuring biscuit rye malt from Canada, base malt from Australia, crystal malts from the UK and New Zealand, hops from the US (mainly Amarillo and Idaho 7 for dry-hopping), kveik yeast from Norway (the Voss strain), and yuzu juice from Japan.

It sounds like a mouthful, and thankfully when you have your mouth full of what we've termed the PoO-totype Global Pale (because we're hopeful this will be the start of a series) we think you'll be happy we carried through, even if it lands nearly three months after #PoO22. Pouring a hazy orange-gold, it opens with tangy Juicy Fruit and citrus aromas plus a touch of spice as the yuzu goes to work with the hops and the kveik esters. It's soft and rounded upfront on the palate with an initial malt-meets-fruit sweetness that segues into a lengthy, drying and spicy bitterness which in turn takes it into quenching territory.

If you want to give it a whirl, it's a single batch brew with kegs appearing at PoO venues anytime from August 4 until they're gone.

More to be added as they're delivered