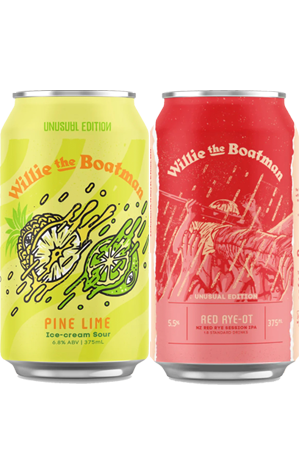 Yeah, crypto is great, but if you’d have invested in ice cream sours three years ago imagine where you’d be now? Perhaps your stocks would have gone up at the same time St Peter’s own Willie the Boatman released Pine Lime Ice-Cream Sour.

A tribute to a "milkbar classic" (I assume a Splice?) this 6.8 percent ABV sour pours gold and clear, looking just like a refreshing lager or pilsner. This is not an illusion that can continue after tasting. A tangle of lime sweetened by pineapple puts a smile on your face and a lingering vanilla turns it almost into a smirk. The citrus is strong but never bitter due to the backend having a creamy ice-cream finish courtesy of the added lactose. The tin promises to be a decadent and layered sour, a claim it deliciously upholds. However, "a walk down memory lane" it is not as I never had a Splice this good growing up.

Although Willie the Boatman are proud of their heritage in Sydney’s inner west, their Red Rye-ot NZ Red Rye IPA is made from 100 percent New Zealand ingredients. Pouring an intriguing deep red (which looks a bit like watered red wine when held to the light) Red Rye-ot holds an impressive foamy head that looks thick enough to chew. On the nose is an almost Christmas cake level of dried fruits, spices, and caramelised sugars.

Unlike what the name suggests, this is no riot on the tongue, however: this glides along like a posh lady’s silk scarf. At first I thought this beer was too light on the tongue but repeat sipping opens up a gorgeous profile with delicate notes of Top N Fill caramel, brown sugar, and the faintest hint of red raspberry lollies. This isn’t an IPA that is stomping down on your tongue, this is a comforting little sipper that can be enjoyed fresh from an esky or chilly bin alike.