The suburb of Tempe, famously known for its IKEA and its location right underneath the final approach to Sydney Airport, has played host to a variety of interesting characters in its long history. William Kerr, Anthony Albanese, Todd Payne, Patrick McInerney and Nick Newey are among them – and, although they may sound like a random assortment of names, they’re all characters in a story that supersedes the suburb itself.

That story begins all the way back in 1830, when convict William Kerr, slave to the owner of Tempe House, was assigned the task of ferrying people, supplies, and (presumably) beer across what is now known as the Cooks River. It is that same Willie the Boatman whose name inspired business partners Pat McInerney and Nick Newey in 2014, almost 200 years later, when – during a self-professed mid-life crisis – the two "fat dads" decided to start a brewery.

With only limited experience in brewing and handiwork between them, they invested all their capital into a warehouse space and filled it with a hodgepodge of furniture, upcycled dairy milk vats turned into a brew kettle and a few nautical bits and pieces to pay homage to Willie. Some of the very first beers made on their inventive system were named after friends and local legends – Todd’s Trailer Ale, Crazy Ivan and the now retired Foo Brew.

Upon brewing a corn ale, a pre-Prohibition era, "working-class" beer, the pair decided to name it after a real working-class man - MP for Grayndler and Labor Party leader, Anthony Albanese.

Whether Albo was consulted or not depends on who you ask, but the beer certainly put the brewery on the map, with photos of Albo and his eponymous corn ale going as far as The Sydney Morning Herald. Soon after, Albanese and Mayor Darcy Byrne joined the area's brewers for the launch of the Inner West Brewers Association, a body that aims to rectify legislative barriers for craft beer breweries and make the Inner West Sydney’s beer mecca, so happy accidents and all that.

As a result, Pat, Nick and Willie became local heroes in their own right, treasured by the Tempe community that had always been a cornerstone of their business. In fact, so strong is their love for community that is has and always will be the cornerstone of their business. Both owners have young kids, and the importance they’ve placed on education in particular has led to a "no no" policy towards keg donations for public school events. Instead, they’ll supply the beer, turn up with the jockey box and pour schooners themselves throughout the night.

Despite the long list of successes, the brewery started to run into issues – not least because they’d run out of local legends after which to name their beers. Despite years of success in the industry in terms of people’s choice awards and public school appreciation certificates, they’d only every taken one official medal home for their beers. They became their own harshest critics for their beers and decided they needed a professional hand. So, they called on another of their friends, beer consultant and judge Neal Cameron, now with the Institute of Beer.

He helped to overhaul their brewing process and, in one year, saw them turn that one medal for one beer in to five medals for five beers. That relationship with Neal has continued to flourish and he still visits the brewery every three months to assess the process and keep Willie on course.

One more welcome challenge was that of space. Having started with just a few grand, the rapid growth of the brewery has necessitated a move to a larger location, which opened in autumn 2019. The new space, which is in the same complex as the previous and also once housed an outdoor Taubman’s paint factory, is as light and breezy as the old one, complete with painted white walls and exposed brick façade. The bar, of which the owners are particularly proud, is an ornate carved wooden affair (complete with "bullet hole"), the seating area larger and there’s even a function room for private events.

Along with the move comes brand new brewing equipment, the most welcome change of which is an actual flow meter, rather than just two buttons – water on, water off. Thankfully, the beers and the legends will be preserved, with old favourites remaining in the core range. Then again, the brewers are always up for experimentation – rumour has it that Nectar of the Hops was in fact the first NEIPA brewed in Australia.

What will be lost is the old dairy equipment, which will always remain as a fond memory and testament to the creativity and skill of Pat, Nick and the brewers, something that would make Willie – and the rest of the characters in Tempe’s long story – nothing but proud. On face value, the name Crazy Ivan – taken from a local character-filled legend – gives a subtle suggestion that this beer is going to taste a bit, well, crazy. The truth is that this is just a beautifully balanced and approachable IPA. Its character is distinguished from a great many IPAs in that the brewers seem to have been willing to give malt more of an even platform to show its stuff. So while hops are, of course, the showcase there’s this wonderful caramel malt character that’s constantly… Read more
Golden Yellow Tempe Tim is destined to hold a special little place in the history of Willie The Boatman as it was the first new beer of theirs to feature in canned format. But beyond that it’s likely going to have a place in people’s minds simply because it’s a lovely little beer. They’ve labelled it a pale ale but at just 3.5 percent ABV it’s a bona fide mid strength – not that you’d necessarily know it though. For such a svelte thing it’s got a good dose of tropical and citrus character on the… Read more
Golden Yellow There are some beers that deserve to be drunk more than written about and this is one of them. Willie The Boatman’s Marrickville Lager a no-fuss Aussie lager, a crowd pleaser, a beer to enjoy when all you want to do is enjoy a beer without necessarily thinking about it. Ok, maybe you could focus a bit on the light dose of fruit character and subtle hop spice if you really want to but, really, you don’t need to. An easy drinking beer like this need not be the centre of attention, just a silent… Read more
Golden What at first seemed like a little bit of fun when it was first brewed turned into something of a social masterstroke that’s ballooned to the point where Albo has become Willie The Boatman’s most famous beer and, perhaps, a stepping stone towards beer industry reform. Albo itself is principally a corn ale, an astonishingly pale beer whose main point of interest from a flavour perspective is that it uses a bit of corn within the malt base in much the same manner as a 1920s farmer in the USA might… Read more
Pale Yellow

When Willie The Boatman was invited to be a part of a festival in Tasmania at the end of 2018 they figured, quite reasonably, that it might be nice to make a beer for the occasion, one with a bit of a flourish of local ingredients. The way in which they did so was via a common ale centred around Tassie-grown Galaxy and Cascade hops. Common ales are typically fairly light in strength and colour and this one is down the line in those regards, a 4.5 percent ABV beer that looks every bit like the golden… Read more
Golden Given the fact that all things must change over time, any businesses with a desire to be around for more than a fleeting moment has to be willing to adapt. You’ve got to be open to new things coming your way. For example, in the beer world, few would have foreseen that a style called XPA would come out of nowhere to become a booming beer category in the space of a couple of years. When Willie The Boatman first opened its doors the style du jour was a simple pale ale, so they made one – Todd’s… Read more
Golden Yellow Willie The Boatman Nectar Of The Gods

Before Willie The Boatman first brewed Nectar Of The Hops the concept of a hazy / New England / East Coast IPA was pretty much unknown in Australia. It’s hard to say unequivocally that they were the first Aussie brewery to jump on the now massive global trend, but they were certainly amongst the first. And given they’ve kept one in the lineup pretty much ever since, they’re certainly one of the most consistently devoted breweries to it. Yet for a style of beer that seems to come within inbuilt… Read more
Golden Yellow 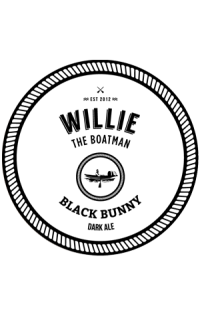 Black Bunny is the dark horse of the Willie The Boatman range. It seems too old fashioned to be sitting there alongside the flashy NEIPAs and Brut IPAs, yet there it is, an ode to malt in a world ruled by hops. It’s built around a handful of dark malts that deliver quintessential characters of smoke and bacon, chocolate and coffee. Those are robust types of flavours but the beer is a shade under five percent ABV so remains smooth and sessionable with just a moderate level of bitterness nibbling… Read more
Dark Brown Adding salt to beer doesn’t, at first, seem like the most natural thing to do. Indeed, thinking about it a second time still doesn’t make it seem the most natural thing to do. Yet it’s been done for a long time – at least, it has if you’ve been swanning around the ancient town of Goslar in Germany where salty beer is, thanks to the water supply, something of a peculiar specialty. It goes by the name Gose and it’s a style that’s undergone something of a renaissance in the modern beer… Read more
Pale Yellow