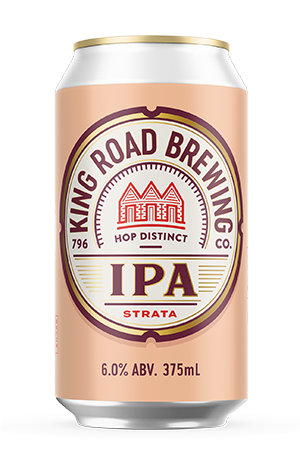 King Road's IPA first appeared not long after the brewery claimed Best New Exhibitor at the 2020 Perth Royal Beer Awards, and instantly impressed. Then out as a limited release, the showcase of then-very-new Strata hops (with a little Mosaic and Citra for company) popped and quickly caught the eye of WA's beer cognoscenti. It made our Best New WA Beers lineup for the year, our team commenting that "Strata shines within this beautifully made, straight ahead IPA. A beer which quickly became the WA brewers' beer. Perfect." and has since claimed a trophy at the Australian International Beer Awards.

Crack a can and you'll fin head brewer Steve Wearing has delivered a punchy, modern IPA featuring a diorama of flavour. A sample shared between four had comments of “peachy stonefruit”, “grapefruit and tangerine”, “pavlova toppings”, “strawberry and passionfruit daiquiri”, “background rockmelon”, “herbal touches” and “a tongue coating, moreish bitterness, which fades out rather than running short”.

In some ways, it seems to have acted as a heads-up to the state's beer scene that this brewery based on a farm 35 minutes south of Perth was one to watch out for as the accolades have just kept on coming.