Given it was founded by Dave and Bev McKee, their children Chad and Selena and their respective partners Maria and Dale, King Road Brewing Co was always going to be a family-friendly venue. Many set out with aspirations to create such a place, however the sheer scale of the brewery, the venue and its amenities ensures it really does deliver on the promise. To give you an idea, they’re building an entire playing field next door where older kids can play soccer!

Yet it wasn’t always this way. An easy 45-minute drive south of Perth, King Road has mushroomed – year on year since 2017 – from scrubby hobby farmlands east of the Kwinana Freeway. Originally, the McKees bought 90 acres of land in the early 2000s as an investment, but while playing around with apples the idea for something rather grander was birthed.

“This all came about because I started making cider for a hobby, for my own personal use,” Dave says. “And then the kids said, ‘We should be selling this, it’s pretty good.’.”

And it is, but more on that later.

After submitting plans for a cidery a decade ago, the couple realised a broader vision would help the project move forward. In simple terms, Bev notes that the council, “didn’t know what we were talking about”.

So, over the next few years, the idea of King Road Brewing Co was developed and, after regulatory permissions were granted, they spent, “four years building it, on the weekends and after work. We lived in the shed for four years, which is a bar now.”

A motor mechanic by trade, Dave managed much of the build himself using reclaimed materials, with help from his electrician son, fitter son-in-law and bricklaying best mate – a tidy team if ever there was for this kind of start-up. But, like many, the lead up to launch day was the easy part.

“From the day we opened, we were locking people out,” Bev says. “It was the Labour Day long weekend, and they were queueing down King Road because we only had a 200-person capacity originally. We sold out of everything.

“The whole thing has been a learning curve and we’ve been supported by the public since then.”

Early Facebook posts are a collection of thanks and apologies; a polite yet overwhelmed mitigation for the swell of enthusiasm for the new brewery, one which was – and still is – seemingly not around the corner from anyone but somewhere everyone locally wants to be.

To accommodate this growth, expansions have included the old hay shed, which has been transformed into a standalone venue, itself the size of many inner-city brewpubs. The vaulted space hosts regular live music gigs and weddings and opens on to the large brewery lawn. They’ve also added an additional brewery bar, more picnic tables and turf, an expanded children’s playground, and another kitchen with a 15 pizzas-at-a-time oven.

And there’s more. At time of writing, they were looking at introducing a canning line and expanding distribution while increasing the venue capacity to between 750 to 900 people.

It’s not only the King Road team with ambitious growth plans either: infrastructure around the brewery includes the extension of Tonkin Highway, the new West Mundijong industrial area and a near 900 percent forecasted increase in population over the next 15 years; nearby Baldivis was recently named Australia’s fastest growing suburb. It’s clear this semi-rural pocket of Perth’s southern corridor will soon be looking for much in the way of beery refreshment and family fun.

However, creativity is found among the approachable offerings, as a Choc Milk Stout featuring cacao nibs, vanilla and lactose proves – a Milo-like expression that hints at future innovation. Among the limited releases have been beers such as a tropical IPA featuring experimental hop NZH-107, and there’s plenty more of that ilk planned.

Now, about that cider. After 20 years of chauffeuring disabled clients to and fro in a medium-sized white bus, it was time for a hobby, and for Dave that was cider. Freshly pressed and lovingly brewed, King Road’s Lord of the Fermented Apple began simply. However, thanks to a chance meeting, he began trading bales of hay from the property with orchardists in the Perth hills, a partnership that continues to this day. As Steve says: “Dave is still in charge of cider.”

Clearly, there’s plenty happening as King Road continues to grow organically. Dave’s beloved cider is still hand-pressed on site, new beers are flowing with greater regularity than ever, and the McKee family business has been welcoming more new families each week, literally hundreds of them (COVID permitting). All in all, not a bad outcome for a hobby.

Blasta cleaned up at the 2020 Perth Royal Beer Awards, claiming four trophies including Champion Small Brewery and Champion Beer. It was a great night for home state brewers, with WA taking out almost every title.

Supporting local while broadening horizons, new openings, cracking beers, and #bigdumbdelicioussoughtaftercheckedinthings, here's Guy Southern with a look back at the year in beer in WA in 2020.

They might not brew hype beers or indeed be a hype brewery, but King Road Brewing Co have been quietly carving a fine reputation – and collecting trophies – in WA. We caught up with head brewer Steve Wearing to find out more. 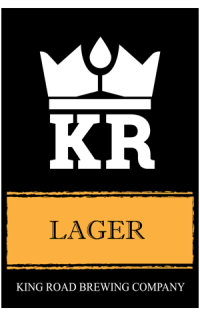 “Light, clean and crisp.” Normally there’s an intricate backstory or tale to be told about the makeup of a beer, but King Road’s Lager is as straightforward as beer gets for head brewer Steve Wearing. So it’s little surprise that his Australian-style offering has quickly become a crowd favourite at the venue, because when you invite 500 people in each day, the majority will be very familiar with such a beer. In keeping things True Blue, KR Lager uses all Aussie ingredients, including Pride… Read more
Golden Yellow 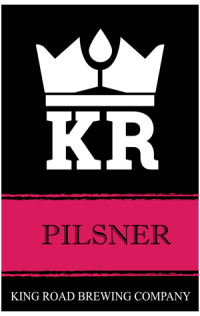 Reinheitsgebot, schmeitsgebot! Sure, you can stick to the proclamations of a 16th century Duke or you can get with the times, while still respecting what has come before. Purists, fear not, however: this isn’t a lactose infused nor lacto soured pilsner, even if King Road have shown modern savvy by dry hopping the traditional German pilsner base with New World NZ Nelson Sauvin hops for a tropical twist. The slightly creamy mid-palate is cleaned up by a firm bitterness and a late dryness which should… Read more
Golden Yellow 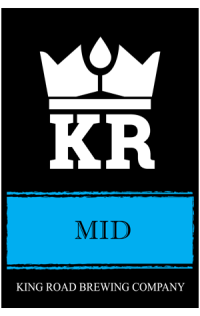 A hybrid of American session IPA and English bitter, King Road’s Mid arrives with more modern flair than most beers of its ilk, not that the hordes that descend on the venue each weekend will necessarily notice. It’s an inspired trick in which the lone low ABV offering is subtly stretching palates in Perth’s outer suburbs towards tropical stylings – and a firm for style bitterness – both coming thanks to Mosaic and Amarillo hops, with a little historical Goldings flourish completing the… Read more
Golden 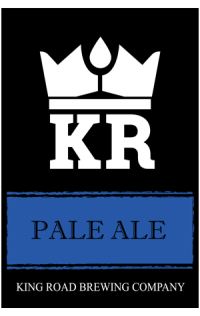 In keeping with King Road’s approachable New World leanings, their Pale has beer nudged from a classic American articulation into the tropical realm with some help from Amarillo and Citra hops. A fleeting light caramel malt sweetness is balanced by a moreish bitterness and a dry coda. Here, pint-sized refreshment is the goal, and if the plan is to spend a lazy afternoon on their expansive brewery lawn, King Road Pale keeps things suitably sessionable. Guy Southern… Read more
Golden King Road’s Wet Hop Ale is a novelty beer in the most affectionately quaint sense. Equally because it highlights the agricultural nature of beer in a world which covets proprietary vac-sealed options, contracted ahead of season, and also because its resulting convivial nature feels like the avant-garde of the mid-2000s: hoppy hubris and excess be (quietly) damned. For their third annual collab with Preston Valley Hops, freshly-picked cones were driven two hours north to be added to the kettle just… Read more
Golden Yellow

And WA stockists in limited release

As Perth signed off for 2021 with a near weeklong run of 40-plus degree days, King Road debuted their first sour beer, simply bestowed Citrus Sour. The astutely-timed release arrives vibrantly looking the part, with an Orange C vibe carrying the palate before a soft tart embellishment – less so than the actual fruit – and a dry resolution. The easy appeal here would have most punters on the expansive brewery lawn being forgiven for mistaking this as a festive mimosa, not that should stop any… Read more
Pale Yellow

Available from the brewery on tap

Or in takeaway canimals Building upon their dialled in core range pedigree, King Road’s debut into the world of misty fog arrives with the same humility as its siblings: “Hey, everyone! If you’ve got time, you’re welcome to check out what’s brewing in Oldbury. Totally cool if you’re busy though.” However, the major difference here is the 18 months of accolades and word of mouth that precede its arrival. Well, that and a furtive, yet substantial, ABV. Zamba, El Dorado and Citra hops lure with sweet navel orange,… Read more
Golden Yellow 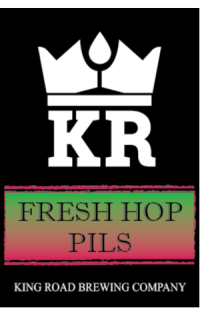 King Road’s 2021 hop harvest exploration continues, this time using freshly dried Victoria and Nugget hops courtesy of Preston Valley Hops. As with their recent Wet Hop Ale, this very Germanic pilsner expression is all about balance, drinkability and restraint. Bready malt carries subtle herbal and earthy notes – these are but fleeting wisps – before the clean, soft bitterness is lifted slightly as the late dry close resolves the palate. Fresh Hop Pils may not be screaming as some may expect,… Read more
Golden Yellow

Available from the brewery on tap

And in takeaway CANimals

The annual hop harvest offers a fleeting chance to use freshly picked, "wet" hops to create a one-off beer expression. While acting as a reminder of the seasonal and agricultural origins of beer, there are challenges with balance in such beers as each crop is unique, leaving the brewer with an intuitive rather than technical application. Once again, the King Road brewers teamed up with Preston Valley Hops for theirs, picking from the bines in the morning and adding the wet Victoria hops,… Read more
Golden

On tap at the brewery

The Belgian witbier – and wheat beers more generally – once ruled refreshment in parts of the world between the World Wars before lager’s industrial dominance took deep root. One example in particular, Hoegaarden, remains well known, although its history is borrowed: 1445? More like 1966. And, given the current drinking climate, making one in the Twenties seems like the most punk rock brewing option, even if the liquid is hazy. In the glass, King Road's take on the Euro classic releases yeast-driven… Read more
Pale Yellow

Available from the brewery on tap and for CANimal takeaways King Road’s first new releases since claiming Best New Exhibitor at the 2020 Perth Royal Beer Awards share appeal in common, yet their desirability will likely be split into two camps. The first is for the pointier end of beer, those always searching for something new or at least with a bold hop profile, which is where Strata IPA comes in. And boy does it! Using predominantly Strata, with a little Mosaic and Citra, head brewer Steve Wearing has delivered a punchy, modern IPA featuring a diorama… Read more
Dark Brown 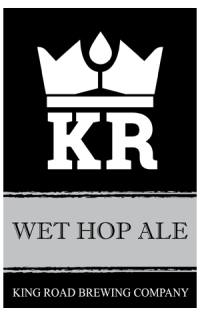 The third Preston Valley Hops harvest, on their land 2.5 hours south of Perth, presented a rare opportunity for the team at King Road Brewing. Thanks to an introduction via a family connection, the brewers completed their hop selection session a week prior to picking, settling on Cascade, Chinook and Victoria – the latter a rarely seen variety kept alive by homebrewers which shares the same mother as Galaxy. Freshly picked in the morning, the bespoke haul was immediately driven to King Road to… Read more
Golden

Launching March 13 at the brewery