The first time we encountered Joel Drysdale, he was walking up the path to Crafty Towers bearing a four-pack of Moo Brew Imperial Stout bottles. As introductions go, it's up there. Later, we crossed paths regularly in his guise as "The Beer Dude" for Tooborac Hotel & Brewery, charged with getting the regional Victorian brewery's beers out and about. And now there's Beer Joel Mk III.

This time, he's doing things for himself. Well, himself and his family. And he's doing it as Venom Brewing, the business he launched in 2015 with a golden ale and a brand that, quite deliberately, was designed with "Love it or hate it" in mind.

As Joel explains of the venom-dripping cobra that forms his company logo: "Whatever you think of it, you're going to notice it."

And people certainly did, with plenty falling into both love and hate camps. However, having eye-catching packaging is only going to get you so far; in an ever busier marketplace people might pick up your beer but, if it's not up to scratch, they're not going to return. Thankfully, the launch beer – the aforementioned Golden Ale designed by Joel's mate Euan Bayliss and brewed at Hawkers – is comfortably one of the best beers of the style you'll find in Australia and helped Venom hit the ground running.

But behind the name and artwork, designed by Brunswick tattooist Hal from Green Lotus, where does Venom come from? As a business, it's a family venture with Joel's wife Janna, dad John and stepmum Heather involved in various ways. Indeed, it's a story involving John that led to the name: he was bitten by a snake in his Mansfield garden one afternoon and, as he waited for his wife to arrive back home, cracked a beer from the fridge.

"When I heard this, I was furious," says Joel. "If my dad was going to die of snakebite, there was no way I’d let him go down drinking a macro brewed lager! So, to combat this, we brewed Venom Golden Ale – just in case Johnny stands on another snake..."

As for Joel himself, we like to describe him as having the sort of face that suggests he's truly ecstatic to be alive every second of every day. And, having grown up around the booze industry, he's got a sharp eye for opportunity too. In a past Crafty Pint newsletter, we mentioned that respected former Temple and Homestead brewer Ron Feruglio was stepping away from brewing to focus on consulting. Within hours, Joel had asked for his contact details. A few weeks later, he announced Venom's second beer would be a black IPA designed with Ron, previously responsible for cult favourites Midnight IPA and Black Swan.

A Pale Ale and Refreshing Ale have followed although, perhaps more importantly, Venom has a home too. Joel and his team took over the Country Club Hotel in Yea, refurbished it and opened it to the public on June 5, 2017. So, while the beers are still contract brewed, you'll find them all on tap here.

You can also find them across state lines, including in SA, where the full range landed late in 2018, and Tassie.

Golden Days Before They End

A few years ago, as the Australian craft beer scene started to move into overdrive, golden ales looked like being one of the driving forces. Today, they're rarely found on tap or in fridges. So, what's changed? If Venom's spitting snake artwork wasn't eye-catching enough in bottle form, it sure is now they've transitioned beers two and three in the core range into cans where they join the brewing company's flagship Golden Ale. And we have to say the move to cans suits a look that's proven one of the more amusingly divisive ever since Joel Drysdale and his family brought Venom to life. If you've not tried the beers before, Refreshing Ale is a mid-strength, one that's been doing much of the heavy lifting… Read more
Golden Yellow You can tell summer is coming as more and more brewery owners pop at least one of their beers into cans ready for drinkers' Eskies. Venom is on the case too, with the brewing company's flagship Golden Ale the first of three to transition to tinnies (Pale Ale and the mid-strength Refreshing Ale will follow). It doesn't just make for added practicality but it means those who love Venom's striking artwork have even more of it to cling to and those who don't will find it harder to avoid when facing up… Read more
Golden Yellow 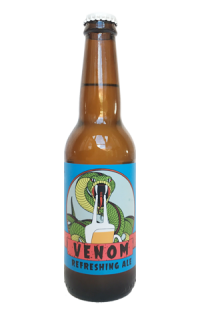 It might not seem the most likely of beers to introduce in a Victorian winter, but by adding a mid-strength quaffer to his lineup we imagine Joel Drysdale had a couple of things in mind: the warmer months ahead and Venom's new home, the Country Club Hotel in Yea – in particular its beer garden. The Refreshing Ale has now been bottled to become the third of the brewing company's year round beers, joining the flagship Golden and Venom Pale Ale, and looks to keep things simple. In many ways, it's… Read more
Pale Yellow 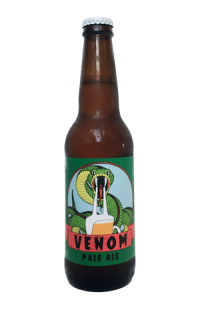 When he was busy launching Venom with his Golden Ale (a beer that we put into our Best New Victorian Beers of 2016 top ten), Joel Drysdale declared that he would never release a pale ale. There were plenty out there already, after all. What's more, his golden ale was a souped up, hoppy affair anyway so why bother? But, like Sean Connery when faced with a fat pay check and Kim Bassinger in a bikini... So, here it is: the beer that never would be, Venom Pale Ale. It's the second Venom beer that will… Read more
Golden 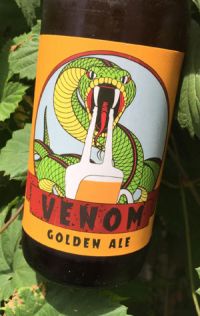 At a past Crafty Pint blind tasting, one of the panelists – someone from a brewery that tends to occupy the further realms of the beer flavour spectrum – remarked that golden ales tend to display restrained hop and malt character. "They're taking out everything I bloody enjoy in a beer!" he said. And while many contemporary takes on the style (if it even is one) do seem to strip out anything of interest at all, particularly those from the supermarket brands, there are some that go the… Read more
Golden Yellow When the conversation preceding a beer involves a long-fomenting concept for a GABS festival beer and a desire to outdo all the stupid things that have happened in beer in 2020, you know you're not going to end up with a classic pilsner. When it also involves a drink popular in Melbourne clubs in the late 80s and early 90s that featured Midori, vodka, triple sec, pineapple juice and fluorescent shot glasses, you know you're not in Kansas anymore, Toto. Which brings us to Illusion Shaker, Venom's… Read more
Golden Yellow When I first visited District Bottle Store, opened in Pascoe Vale by the families behind Venom Beer and Coburg Brewing Co, Joel Drysdale – founder of the former – brought my attention to an imperial fruit sour from Sydney's One Drop, claiming it had blown him away and was the sort of beer he love to brew. (I bought a can; it was indeed marvellous.) Roll on a few months to October 2020 and here comes an imperial fruit(ish) sour from Joel and his partners-in-booze (who are counting down the days… Read more
Red The great golden survivor lives on! As part of our Ten Years Of Crafty series we looked at the changing tastes over the years we've been covering the Aussie beer industry, with golden ales a style that rose to prominence only to be superseded in most breweries' lineups. Venom's has stuck around and it's not hard to see why: if part of the reason many died out is that they're not fruity and hoppy enough, it's not an accusation that can be directed at this beer. And now, having formerly appeared in… Read more
Golden Yellow Many, many moons ago, on a family trip to visit relos in the States, I developed a taste for their powder-based lemonade drinks. I'm pretty sure the brand I picked up wasn't great for one's teeth but it was certainly good for firing one's teenage self up with an intensely sweet, citrusy hit. And, for some reason, once the Venom and Deeds collab Viper Pit was in my glass and the head had mostly dissipated, it was to those pour, shake and quaff concoctions my mind travelled, what with its pale yellow,… Read more
Pale Yellow 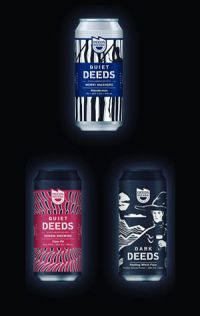 Halloween’s here to stay in Australia and as much as the American-inspired holiday might annoy many Aussies, all that we can do on that front is direct you here. Deeds Brewing looked to join those celebrations in 2019 by releasing not one but three rather spooky beers, which follow closely on from their Tallboy & Moose collab, itself inspired by The Shining. The lightest of this trio is Slenderman, an IPA brewed with Merri Mashers member Rohan Lowe. Rohan took out the Deeds Brewers Choice award… Read more
Black At 2019's Bendigo On The Hop, we ran a couple of IPA blind tastings for attendees. As ever with such things, the results varied from session to session; after all, we all have different palates and different tastes. No beer on the lineup attracted such wildly differing opinions among attendees, however, as the West Bendigo IPA from Venom – a collaboration with Bendigo venues The Hop Supply Co and Handle Bar they were launching on the day. It picked up both full marks from some and cutting remarks… Read more
Golden

Dessert beers feel like they're constantly being released during winter so how do you try and stand out from the crowd? You could, as Venom Brewing have done, create a beer inspired by Sunday brunch. Brewed with honey from Victoria's Central Goldfields region, Honeycomb Choc Porter is a sweet and dark beer best suited to drink while tucking into an over-loaded plate of pancakes. The sweet chocolate is the clearest flavour and immediately conjures images of scoffing down Smarties as a kid. The honey… Read more
Black Venom's tattoo artist logo and label design managed to become one of the most talked about in Victoria when the brewing company's first beer, the fine Golden Ale, was released. That was as founder Joel Drysdale intended, with the beer good enough to overcome the brickbats from those who didn't like what they saw; indeed, he was soon brewing double size batches of it at Hawkers. The Black IPA from they brewing company, which has become a regular winter staple, doubles down on that eye-catching branding… Read more
Black We covered much of the background to this beer's arrival in an article on the rise and fall from prominence of golden ales – which you can read here. But what of the liquid that Venom's Joel Drysdale wanted to create in tribute to his flagship Golden Ale? Well, deciding that simply doubling the ingredients was one thing but giving it a contemporary spin was even better, he enlisted the team at Carwyn Cellars as co-conspirators, given they're rather more au fait with the hazier realms of the hoppy… Read more
Golden Yellow