Fox Hat launched in 2015 as a sibling brand to Vale Brewing. The craft beer industry was really starting to come into its own, with a growing number of drinkers after more "off the chain" beers – the sort of creations that didn't really fit Vale’s more mass market DNA.

Thus Fox Hat was designed as an experimental, “unleashed” place where head brewer Jeff Wright and his team could have a little fun, giving them liberty to make bigger, bolder beers, a move that led to him digging up some old homebrew recipes to tweak and upscale along the way.

As Jeff told The Crafty Pint at launch: “Fox Hat will be a range that will reflect our personality as brewers. It’s a way to keep our interest in using new hops and working with new styles.”

In October 2017, both Vale and Fox Hat were acquired by the family-run South Australian beverage company, Bickfords, giving the 180-year-old a pair of beer brands to add to the cider, vodka, wines, spirit and non-alcoholic labels that already sat under their Vok Beverages banner.

As for the name, Fox Hat came from a brainstorming session that ended with them landing upon the punchline from an old joke featuring the Queen, Prince Charles and Wagga Wagga. These days, should you hear the Queen say: "Wear the fox hat", you can tell her the beers can be found in most Australian states, as well as at The Vale Taphouse that opened as a home for the sibling brands in September 2022. 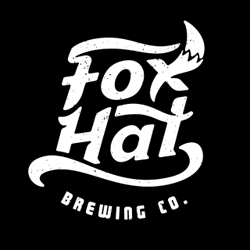 To be heavy handed means to be forceful or somewhat rough. Alternatively, in the cooking sense, it means to add more than is required, resulting in, say, a rather salty or spicy meal. When it comes to Fox Hat’s Heavy Handed XPA, the name is a reference to the extra hops that have made their way into the beer. That said, with the beer designed to sit at the front of the queue for Fox Hat’s core range at just 5.2 percent ABV, it's a case of being a little more forceful without taking the beer… Read more
Golden Yellow It may be a bit of a stereotype that red heads tend to be a tad fiery, bold and a little out there (but they say there's no smoke without a fire). And that's exactly the direction Fox Hat has headed with its latest core range beer, Red Pelt. It's an India Red Ale that fits nicely into their regular range, slotting in between the Metric IPA and Phat Mongrel Stout in colour. Continuing the stereotype theme, this isn't a bookish redhead that'll spend its lunch break in the library fussing over last… Read more
Red If you were looking for a short and sweet explanation of how Fox Hat differs from its longer established sibling brewery Vale Brewing, the easiest thing to do would be to look at their respective IPAs. Vale's is in keeping with that brand's approachable, mainstream craft ethos: the aromas and flavours of an American-inspired IPA are there, but kept in check and with a bitterness that tickles rather than hammers. Fox Hat's, on the other hand, lets rip, packing so many hops into the mix that it registers… Read more
Golden Remember the days when no new small brewing company would dare open their account with anything more than a pale ale or something equally crowd-pleasing? It's one sign of how far the beer industry has moved that there's less need to do so now; where once Moon Dog's decision to launch with a Cognac barrel-aged double IPA was outrageous, these days, if your business plan suits it, there's much to be gained from announcing yourself with something ballsy. And that's what Fox Hat did with the Phat Mongrel. This… Read more
Black 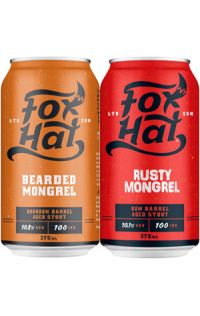 During the darker, colder months of the year, Fox Hat release a whole family of stouts; in 2022, that family has grown by one. Joining their Phat Mongrel oatmeal stout, Full Mongrel RIS and the 2022 version of the bourbon barrel-aged Bearded Mongrel comes is another spirit-soaked monster. The Rusty Mongrel takes the same Full Mongrel base stout, then left to sit in Beenleigh rum barrels for ten months. These four stouts are a welcome sight, released from hibernation to give beer lovers big, boozy… Read more
Black 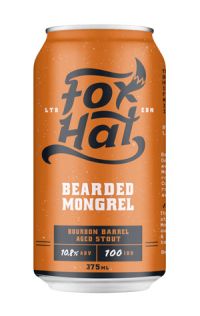 Now in its third year, Fox Hat’s Bearded Mongrel continues to utilise parent company Bickford's resources, with the brewers ageing a Russian imperial stout once again in Bearded Lady bourbon barrels for several months. Originally launched at the 2019 Adelaide Beer and BBQ Festival, the barrel-aged version of the Phat Mongrel and its bigger brother, the Full Mongrel has proved popular every year and, in 2021, it comes in a new look, bright yellow can. The Bearded Mongrel is quite a measured stout,… Read more
Black Every year, when the temperature drops to bitterly cold, Fox Hat release their oatmeal stout, Phat Mongrel alongside an imperial version, Full Mongrel. And, just when you thought that was enough Mongrel to see you through to spring, Fox Hat decided to barrel age the latter and gave birth to Bearded Mongrel. A 10.8 percent ABV imperial stout first released at the 2019 Adelaide Beer & BBQ Festival, it returns in 2020 after several months in Bearded Lady Bourbon barrels. The liquid drips with bourbon,… Read more
Black Fox Hat’s very first beer was an oatmeal stout called Phat Mongrel: an American style stout typically served on nitro, it's a beer designed to ease drinkers into the early stages of winter. But, when full winter hits, the brewers like to bring its bigger sibling, Full Mongrel, out to play. A supercharged 10 percent ABV Russian Imperial Stout intended to warm you from the inside out. Just as the name suggests, Full Mongrel is aggressive, immediately making itself known with an array of dark roasted… Read more
Black