In 2014, when Lion decided to move White Rabbit from its original home in Healesville to Geelong, the news was met with some concern from both locals and those who would regularly make the trip to visit the brewery.

But, for two local families, White Rabbit’s departure was viewed as an opportunity: a chance to create a new brewery for Healesville. The quartet was made up of Aaron Malmborg and Ben Hamilton and their partners Emily Sheppard and Hanna Hamilton, who launched Watts River Brewing in 2015.

Aaron and Ben had met as brewers at White Rabbit and, when it came time for the brewery to move, neither they nor Emily or Hanna had any interest in leaving too. Indeed, their attachment to the town was such that it led them to the name for their business: Watts River is the waterway that skirts Healesville and was diverted close to a century ago to create the iconic Maroondah Dam.

Despite sharing two brewers – and the same initials – as White Rabbit, from the outset the foursome was keen to establish their own identity. On the beer front, Aaron and Ben set about achieving that with a core range focused on tight, balanced beers that sit a degree or two away from where you might expect to find them style wise: a lean and dry IPA; a bright, malt-driven blonde ale; a lightly smoky stout. Many make good use of barley grown on Ben’s parents’ family farm, a paddock to pint story the Watts River team proudly emphasises as a regional brewer.

But, step away from the core trio and you’ll find experimentation running rife; as the barrel-lined walls of the brewery would suggest, there’s a penchant for slightly funkier beers. Among those is the brewery’s as-close-to-a-regular-release-as-they-can-manage Brett Pale Ale, a beer that acts as an impressive showcase of how clean and balanced a Brettanomyces beer can be, how strains of the yeast can be used to add appealing fruity characters to an otherwise line and length beer.

Add in the barrels and there's a whole other level; just ask anyone who attended the Crafty Cabal Meet The Brewer session at the Good Beer Week launch in 2018 about the 15 month barrel aged Brett beer...

Initially, Ben and Aaron operated as gypsy brewers as they waited for their stainless to arrival and for council approval to come through before, within a year of launch, the tanks were in and production moved to an old warehouse close to the eponymous river.

The warehouse is now a popular hangout for locals as well as an established stop on the Valley’s tourist trail. It’s easy to see why: not only do the beers offer a diverse selection of experiences, but they’ve given their home plenty of colour too: the brewery fills the rear, vintage furniture and walls of cartons add bursts of orange, red, blue and green inside and out, while repurposed equipment and even a piano add to the charm. Barrels line one side as well as acting as furniture and the homemade bar is the kind to intrigue fans of Heath Robinson.

It’s an insight into the brewery’s ethos and, as such, a great place to enjoy their beers in the company of whichever of the four happens to be behind the bar. Yet you don’t have to try hard to find their bottles and tap decals elsewhere, with their decision to stick around and brew embraced by other small businesses keen to keep local beer flowing.

When Lion announced its decision to move White Rabbit to Geelong, many bemoaned its loss from Healesville. But now two former White Rabbit brewers and their partners have set about bringing a new brewery to the town.

The region might still be best known for wine but today the Yarra Valley offers visits a plethora of food and drink options. It's home to a growing number of breweries and venues where you'll find a few crafties too, so here's our guide to finding grain amid the grapes. If you were to compare a visit to Watts River's brewery to one at the scores of local wineries, the Blonde would be the equivalent of their lightest white, the drink from which you'd launch through a tasting. A pale golden colour, it features soft, grainy malts, gentle hopping that delivers floral and spicy elements and a delicate drying bitterness. Not too dissimilar to a kolsch in character, it's a beer you could sit on for a session or, as per the lighter whites, one from which to launch into… Read more
Golden Yellow The label might say dry and roasty but Watts River's stout stands out from the crowd for another reason: the addition of smoked malt. Sure, the dark chocolate and and roasted coffee flavours found in many a dark beer of this ilk do the bulk of the lifting but the smokiness plays a significant role. It's there on the nose, mentally recreating the log fire beside which you'd enjoy such a beer, and remains through to the end, joining the roasted, bitter chocolate finish to add more depth and length… Read more
Dark Brown In keeping with the other two beers that made up Watts River's initial core range, this IPA goes about delivering plenty of flavour but within a tightly wound package. In part, that's due to putting the "pale" into India pale ale, stripping the malt profile right back so it's an unobtrusive partner there to provide a backbone and structure upon which the hops can go to work. They do so with grapefruit and sweet citrus to the fore and a touch of pine in support on the aroma front. There's… Read more
Golden Yellow 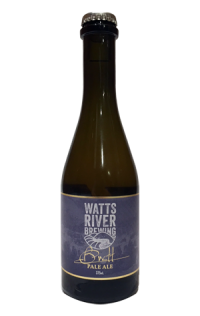 Back when they were operating as gypsy brewers and getting everything in place for their own brewery, the Watts River team said one of their first plans once they moved in was to get to work on a Brett Pale Ale. That they did and it's grown from there to become a pretty regular release throughout the year. It's very nature means it's a beer that will evolve over time and for each new release the brewers keep the same base recipe while changing both the primary yeast strain and the type of Brett used.… Read more
Golden Yellow Originally tagged as a "Special Batch" release, when we first tried River Session we felt it came across as the sort of beer that, perhaps even more so than the Brett Pale in their lineup, you might expect to find always on at the brewery. So we consider it fortuitous that the beer later became a constant at Watts River, receiving a branding tweak and joining the brewery's core range. It's another hazy pale golden beer, one that has Kiwi hop Riwaka at its core, from which it delivers a… Read more
Golden Yellow When your brewery is located in a town that constantly fills with day-trippers from Melbourne, you're likely going to make sure there's beers available for people to enjoy before they head home. At Watts River Brewing in Healesville, the team has looked to pack a beer full of hop flavours while keeping it at the very reasonable 2.9%. The result is Nipper, a beer that pours incredibly pale, clear and has a bright mix of honeydew, peach and nectarine flavours leading the hop front. There’s very… Read more
Pale Yellow 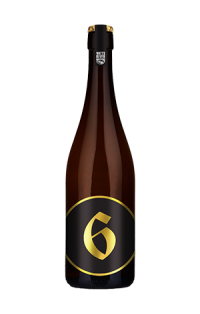 It’s been six years since Watts River opened their brewery in Healesville and they’ve celebrated that milestone with class, tradition and provenance. Their 6 Celebration Ale takes its inspiration from strong Belgian Trappist ales and is also a tribute to their region thanks to the inclusion of locally-grown black truffles from Yarra Valley Truffles. As well as including mushroom’s decadent cousin, 6 makes use of malts grown on cofounder Ben Hamilton’s family farm (as do many other Watts… Read more
Dark Brown If you've not been to Healesville – ever or just in the past couple of years – but you're an enjoyer of the finer drinks in life, then it's well worth factoring a visit into upcoming travel plans. The town has always been one of the key spots in which to base yourself for a few days of immersion in the Yarra Valley's delights, and these days is home to both Watts River and the reborn Matilda Bay breweries, Four Pillars Gin, cellar doors including that of Payten & Jones Wines and more besides. Taking… Read more
Red Normally, were we only to get our hands on a beer a few months after its release, we'd just sample it for our own benefit, rather than write about it for public consumption. But there's a few reasons we want to give Watts River's P2G – Paddock to Glass – a run: it's a reminder of their use of one of the founders' parents' grain for their beers; it's still presenting really well; and we might as well chuck COVID in there too as it means they've still some pouring at their Healesville taproom. This… Read more
Dark Brown When the COVID-19 crisis took hold, the team at Watts River got busy helping local distilleries create much-needed hand sanitiser with the brewers even creating their own hop-tinged sanitiser to sell in their Covid [mixed] Cases too. It’s not the only way they’re lifting spirits though: they’ve also created an easy-drinker to lift spirits, one that’s hopefully as friendly as those mates you'd normally be having a beer with. Isolation XPA features pilsner malt grown on Watts co-founder Ben… Read more
Pale Yellow About midway through 2019, Sailors Grave made a detour on one of their many journeys between East Gippsland and Melbourne to stop in at Healesville. There they brewed a beer with Watts River and, given the combined love for farmhouse style beers and brewing with Brett the breweries share, there was only really one way that collaboration was going to go. Horse To Water is a farmhouse ale that was brewed with pineapple sage before healthy doses of actual pineapple and Brettanomyces were added to the… Read more
Golden One of the first Brut IPAs to come out of an Australian brewery, bottled mid June 2018, and one of the finer efforts we came across in the early months of the style's march across Australia. Pale and relatively bright, it serves up crystalline, fruity hop aromas atop a nicely rounded body, wrapping up nice and dry with a bitterness that complements the dryness rather than distracting. That said, the brewers plan to make future batches drier still...… Read more
Pale Yellow 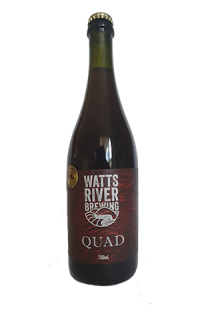 A Quadrupel isn’t a beer you often find in Australian breweries, which is a little unfortunate really. Often, brewers and beers fans talk about their travels through Belgium in the 1980s and 1990s that shaped their current love for beer and driving them to better understand styles packed with big and unusual flavours compared to what they found at home. Try to find an Australian Quad without any crazy adjuncts additions though, and things get a little tricky. The styles' seeming rarity seems all… Read more
Rich Brown