Spend enough time around the beer industry and you’ll likely hear someone utter the joke: “How do you make a small fortune? Start with a big one and open a brewery.”

Equally, while the appetite for beer that’s something other than industrial lager continues to grow, the marketplace is a tough one, with more than 600 brewing companies of every size and shape vying for drinkers’ and retailers’ attention and dollars at time of writing.

Yet the dream of becoming a brewery owner and dedicating your life to producing something you hope will bring joy to people remains compelling. And there are still parts of Australia ripe for a local brewer to bring their own spin on beer’s story to a new audience.

All of which brings us to Red Bluff. It’s the Lakes Entrance operation launched in 2017 by Wayne and Donna Burnett. After thirty years in the construction industry, they decided it was time for a tree change and relocated from Pakenham on Melbourne’s eastern edge to Lakes Entrance, where Wayne started dabbling in homebrewing in his shed.

Over time, realising 4 Pines and Fat Yak were pretty much the only craftier beers on offer in the region’s pubs and clubs – and that there was a strong tourist influx, particularly in summer and around Easter – they started eyeing up a different future. After all, they enjoyed brewing beer and their friends enjoyed drinking it so why not see if more people would too?

“It was either a case of build a bigger homebrew kit to keep supplying friends and freeloaders or buy a small commercial system and see if we could help boost tourism,” Wayne says. “Because people do gravitate to microbreweries.”

And thus Red Bluff Brewers was born, in part inspired by their travels on which they’d always hunt down local microbreweries. Wayne scaled up some of his brews and the couple started bringing them to a town with no brewery to call its own. All while adjusting to their new reality…

“It’s more hours and more work and the income isn’t as good,” he says. “It’s more of a lifestyle and that’s why we moved here: to make a living out of a dream we’ve always had.”

Over summer 2020, they launched a pop-up taproom where visitors can try the beers – regular and seasonal on tap. They've also started bringing in food trucks and live music for special events and will be developing the space into a fully-fledged venue with food showcasing local produce.

You’ll also find Red Bluff beers in a growing number of the region’s pubs, clubs and hotels. And, since they launched the core lineup of beers with bold label designs that celebrate the surf coast, courtesy of Clint Weaver of Pocket Beagles (CoConspirators, Froth, Brewmanity), they’ve been popping up in the odd Melbourne store too.

As for the nature of those beers, for the most part they would typically be classified as sitting within the approachable realms of the beer spectrum. As Wayne points out, the market in and around Lakes Entrance is rather different to that of inner Melbourne and they want to cater for – and attempt to convert – their locals first and foremost. That said, you’ll still find sessionable fruit sours appearing alongside the likes of their lager, pale and summer ales.

In this increasingly busy beer marketplace, the prevailing wisdom is that anyone entering the market these days is best to find a location lacking a local beer option and create a hyperlocal brewery venue. And, from location to ethos to branding, that’s what you’ll find at Red Bluff.

Today sees venues across Victoria open for the first time in weeks after restrictions were eased on their second shutdown. We chatted to two of the businesses eager to welcome guests back. 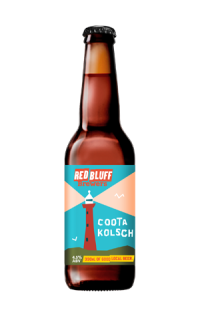 The aim, for the most part, at Red Bluff Brewers is to gently entice drinkers away from the mainstream and into the world of locally brewed beer. As such, the core lineup leans to the approachable, and never more so than with the Coota Kolsch. It pours a cloudy cracker colour and pairs a light floral hop aroma and soft, bready malts with a touch of sweetness with low bitterness and a dry finish.… Read more
Golden Yellow 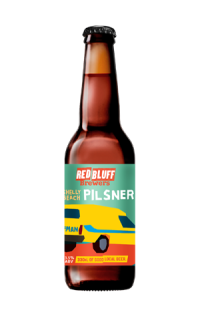 They've put out a few lagers in their relatively short life to date, with Shelly Beach also acting as the mid-strength in the Red Bluff lineup. There's a hint of spicy Euro hop aroma, some honey sweetness and a fuller body than you'd expect in a 3.5 percent ABV beer, plus a touch of drying bitterness, while I'd be keen to see how it presented with higher carbonation to boost its sharpness. James Smith… Read more
Pale Yellow 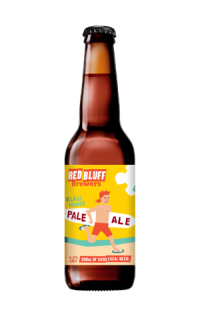 If you come to this beer expecting something light and fruity, you've come to the wrong place. Red Bluff Brewers have their 3 Lakes Tropical Ale covering that base; for their Glasshouse Pale Ale they've created something more reminiscent of the pale ales of England. Colour wise, it looks more like an amber ale than today's more stripped back pales and allows the malts to take centre stage. There's toffee and hints of chocolate with an earthy, drying bitterness there to underpin the sweetness. James… Read more
Golden 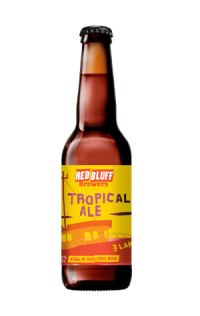 Red Bluff's 3 Lakes Tropical Ale is the beer most craft beer drinkers would associate with the world of the modern pale ale. As opposed to their Glasshouse Pale, where malt character leads the charge, this bright golden ale is very much about the fruity hops. Aromas of sweet orange, mandarin and passionfruit rise from its fluffy white head, while there's ripe pineapple in the mix too, not to mention a lively sherbet component. Add in a crisp bitterness and you've got a welcoming and refreshing drop. James… Read more
Golden Yellow 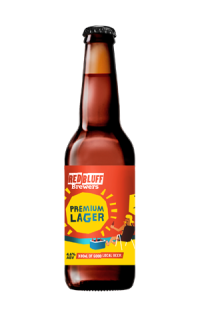 When your mission is to bring local beer – and different beer experiences – to a part of the world where there's been nothing of the sort, you're going to want something in your lineup to offer familiarity too. Hence why a visit to Red Bluff Brewers in Lakes Entrance will see you presented with a few such options: their mid-strength Pilsner; the Coota Kolsch; and this Premium Lager. Copper-coloured with sweet honeyed, biscuity and light caramel malt aromas and only the faintest of soft Euro hop… Read more
Golden 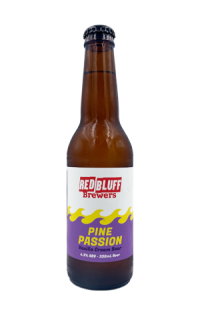 It's a sign of how tastes have been changing apace in recent years that it wasn't long after Red Bluff Brewers started brewing in Lakes Entrance that they tested out fruited sours on their early customers. And then, having seen how they were received, that such beers became regular guests on their taps and in their bottles. When summer 2021/22 rolled around, and those holidaymakers not stuck in iso made their way to Gippsland, there was another flavour awaiting them, with past favourites such as… Read more
Golden Yellow 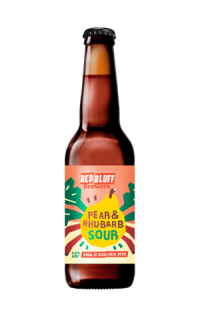 Now here's a beer that keeps its secrets under wraps. There's little given away on the nose, despite the fresh pears and locally-sourced rhubarb in the mix; if anything, it's akin to walking past the fruit 'n' veg patch in your back garden – faintly earthy fruitiness – while that increasingly familiar lactobacillus aroma makes an appearance too. Things soon step up on the palate however: the pear is the liveliest, sitting atop the prickly carbonation and acidity, and, while it might not initially… Read more
Pale Yellow 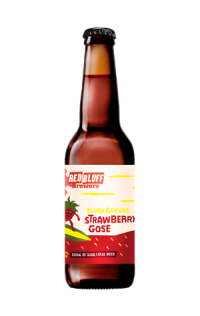 It might sound like the name of a perfume endorsed by a past winner of The Voice, or perhaps a gentler introduction to the world of Mills & Boon, yet it turns out the name of Red Bluff Brewers' first gose is another that pays homage to East Gippsland: Blush and Desire are varieties of strawberry grown in the region. Along with the sour pitch, the berries and the saltiness all make themselves known in a manner reminiscent of a summer pudding – there's a creaminess to the texture too despite… Read more
Golden 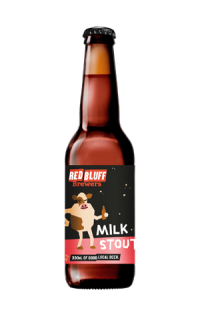 Ah, to be reminded of where lactose used to be found in beer and arguably belongs more than anywhere else... As we wrote in summer 2019, milk sugar used to be the preserve of stouts – at least in the beer world – and that's where Red Bluff have opted to use it here. Clearly, however, a fair load of bitter roasted barley was added to the brew too as it still possesses a feistiness that teases the sides of the tongue as the lactose brings out a soft dark chocolate on the nose. There's something… Read more
Black