Pairing beer with food – and cooking with beer – has moved well beyond pie in one hand, beer in the other. Across Australia, just as long held perceptions of beer as little more than a cheap means of getting sloshed are being shattered, so are notions that it is inferior to wine as a partner for good food.

One only has to look at the program for festivals such as Good Beer Week to understand how far beer and food has come; when Vue de monde, Chin Chin, Estelle and Pope Joan are hosting events and the Mega Dega – pairing six top chefs with six leading brewers to create a pairing each – sells out six weeks early, you know the times they are a-changin'.

Of all the people driving that change across Australia, there is no one as firmly focused on the beer food message as Gerrard "Mitch" Mitchell of Beersine. The WA based chef cooks with beer, creates entire menus paired with beer, creates dishes using beer's base ingredients and advises chefs on cooking with or for beer. In other words, if you want to know anything about the pairing of beer and food, chances are he has the answer.

At the last Good Beer Week in May, he got to showcase his talents as one of the six chefs at the aforementioned Mega Dega III at Green Park Dining, where he was challenged to create a dessert to match up to Nail Brewing's epic Clout Stout. The resultant dish featured multiple beer ingredients as well as his own brettanomyces chilli sauce and wowed many in attendance. So we're doubly delighted to announce that, as we bring back our long dormant beer and food features, Mitch will be the regular Crafty Pint Beer Food guru and will be kicking things off with the recipe for the aforementioned dish (which he is pictured introducing above).

But, before we present the recipe for his epic Clout dessert, what do you need to know about Mitch? We caught up with him when he was setting up the kitchen at Blackman's Brewery in Torquay last year to find out how he ended up where he is now.

It turns out he started working as a chef straight from school, initially around Perth before heading to London for an 18 month visit that turned into eight years, of which the latter period was spent cooking for wealthy clients around the City of London. It was here that the exploration of food and wine pairing began – with sake getting a look in when at the Pacific Oriental too.

It was upon returning to Australia and landing a job at The Monk in Freo (when it was still the Mad Monk) that beer first reared its head. New owners encouraged him to bring his experience with Asian cuisine to bear on the menu, while then head brewer Justin Fox (now at Colonial) was pushing to have the brewery's beers recognised for their quality too.

"I'd walk in in the morning and smell these amazing aromas and would try to guess what Foxy was brewing," says Mitch. "Then we started playing.

"I started tasting the beers and seeing the grain and wheat and started thinking, 'There's more to this.' I started doing Google searches for beer food and nobody had really touched on it. I put some sourdough starters together and the ones in the brewhouse worked the best and it just grew from there."

There followed beer cheese featuring the brewery's award-winning Rauch smoke beer, more beer breads and ultimately an evolving menu that wasn't just designed to compliment the Monk's beers but used them and their base ingredients; Saaz hops appeared in a tart – even tags from keg tops made appearances amid dishes.

"It reinvigorated cooking for me," says Mitch. "I started thinking about flavours in a different way.

"What really got me thinking about [specialising in beer and food pairing] was meeting the brewers. I found that they were often the same guys doing the distributing and that was awesome. We instantly felt at home with the brewers. That community made me go, 'Wow!' They were just salt of the earth people.

"Chefs aren't artists, they are craftsmen, and so are brewers."

A period in the kitchen at Feral in Swan Valley followed. There were 20 beers instead of eight to play with, a cool room in which to hang his own cured meats and, in Brendan Varis, one of the country's best brewers to teach him more about beer. From there it was to Five Bar in Mt Lawley, all the while developing products that used beer with wife Paras Mavridou.

The first to gain traction was his beer cheese, in particular one using pale ale. Word reached The Merrywell in Perth, where they started using it, then Mitch and Paras began contacting bottleshops around the city and it grew from there.

"We took over an old butcher's shop so I could make charcuterie with the plan eventually to make the cheese there too," says Mitch. "We'd been looking for commercial kitchens for me to produce stuff but they were either too expensive or unavailable. Then we found the empty butcher's shop."

Today, things have come full circle, with Mitch back as head chef at The Monk, albeit with a new team. Former Goat brewer Craig Eulenstein is in charge of the beers and recently collected a swag of major medals at the Australian International Beer Awards, while Perth man-about-beer Matt Marinich heads up the venue. Outside The Monk, Beersine, consulting about beer and food, plus beer events across the country fill the rest of his hours (you'll find him invited to dinners at pretty much every Aussie beer week going, such as the rather intellectual one at Cammeray Craft pictured below). 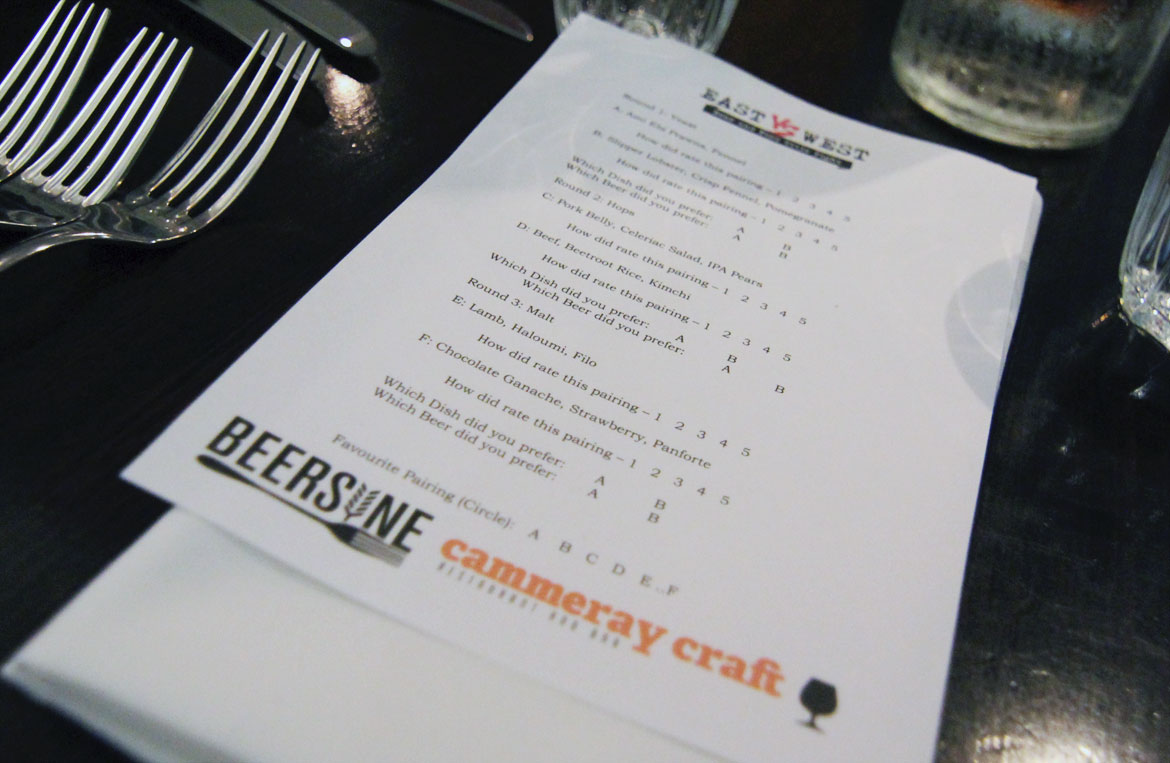 Now, as well as the cheese, Beersine produces beer jerky, brettanomyces chilli sauce, hop honey, beer mustard and a range of other specialty dishes as an event allows, such as his "Off the Wagon Wheels" – a beerified take on the Wagon Wheel. Where possible, menus are created with local produce; all meat products used are organic, biodynamic, free range.

"If I'm preparing a menu for a beer event, I'll try to use beer in the food. If I know a beer features pale malt or caramel malt, then I might use that in the dish," he says. "I want people to think about beer and food a lot more.

"There are some great beer venues doing really good stuff with beer, like Colonial and Eagle Bay [in the Margaret River region] but I'd like to see more imaginative use of beer and see brasseries and bistros offering a decent selection of beers.

"For me, dining isn't just about the food, it's about the experience. Beersine wants to play a role in seeing the growth of craft beer and good food being enjoyed with craft beer."

Hopefully, at The Crafty Pint we can help with that too. Tomorrow, we'll launch the Beer Food with Beersine series with a few of Mitch's favourite beer and food pairings as well as (for the adventurous) the recipe for the dessert with which he dazzled at Mega Dega III.

Thanks to Andrew Smith at Craft Everything for the photo at the top of the article.