They may have spent the weekend shivering their way through the first (and almost sold out) Adelaide Beer & BBQ Festival. But for a number of small South Australian breweries, there was plenty of warming cheer to be had at this year's Royal Adelaide Beer & Cider Awards.

Myponga's Smiling Samoyed took out Most Outstanding Beer for its Dark Ale as well as Champion Australian Style Pale Ale for its 12 Paws pale ale. Prancing Pony, based in the Adelaide Hills, followed a successful move to a new, larger venue earlier this year with the Champion Small Brewery title as well as Champion India Pale for its India Red Ale. And Vale Brewing took out Champion Large Brewery (for breweries with an annual output of more than one million litres) after its Vale Brewing and new Fox Hat beers scored highly and secured them the trophy traditionally won by Coopers.

The awards were handed out on Friday evening at the Adelaide Showgrounds, where it was so cold that Smiling Samoyed co-owner Simon Dunstone (above centre) was wrapped up under a beanie and jumper while partner Kate Henning (above left) poured beer at their festival stall elsewhere on the site.

"I wasn't expecting too much so it was a real surprise," he says. "We were really thrilled."

The couple gave up corporate careers in Adelaide to take over the former Myponga Brewery in November 2012 (as you can read here) and have set about expanding the brewery – more tanks are on order – and putting their own stamp on the venue, with renovations taking place in time for summer. Most attention to date had been on their 12 Paws and IPA, but it was the Dark Ale that wowed the judges this time around, the beer also taking out the Champion South Australian Exhibit and Champion Amber / Dark Ale trophies.

"We've no regrets – it's still lots of fun," says Simon of their career change. "It's hard work but a lot more rewarding; it's more fun than sitting behind a desk [and] to be recognised with our first real trophy is really good."

The award comes on the back of a "surprisingly good" winter in which drinkers have braved the cold of Myponga to sample Simon and Kate's wares – and hang out with the three dogs that make up the 12 paws.

"Pubs in Adelaide are supporting us – pubs all over the place, including ones you wouldn't really expect," says Simon. "Our Kolsch is doing well against mainstream Australian lagers."

He reckons their success here is down in part to the explosion in microbreweries and accompanying buzz for craft beer in South Australia, as highlighted by the thousands that braved the cold for the weekend's beer festival.

"We are only a couple of people trying to sell our beer, but when there's 10 companies doing it the word is a bit louder; publicans pay more attention and punters are starting to ask for it," he says.

One of the companies that's been pounding those streets a little longer is Vale Brewing, formerly McLaren Vale Brewing Company. As we wrote on Friday, they recently launched a second label called Fox Hat under which head brewer Jeff Wright (pictured above right) has been given license to go a little wilder with his recipes. It's helped them take the Champion Large Brewery title as the Fox Hat metric IPA picked up a gold and Phat Mongrel a silver to go with yet another gong for Vale's DRK dark lager.

"It's all a little bit of fun," Jeff says of the new brand. "It's to remind people that as a brew team we can do more than pale ale and lager. It keeps us all entertained and lets us play with new hops and new bits and pieces."

As for Prancing Pony's win in the Small Brewery category, it continues a quite remarkable rise over the past two and a half years. Already they've had to move from their initial home to a larger one near Hahndorf where things continue to go from strength to strength. 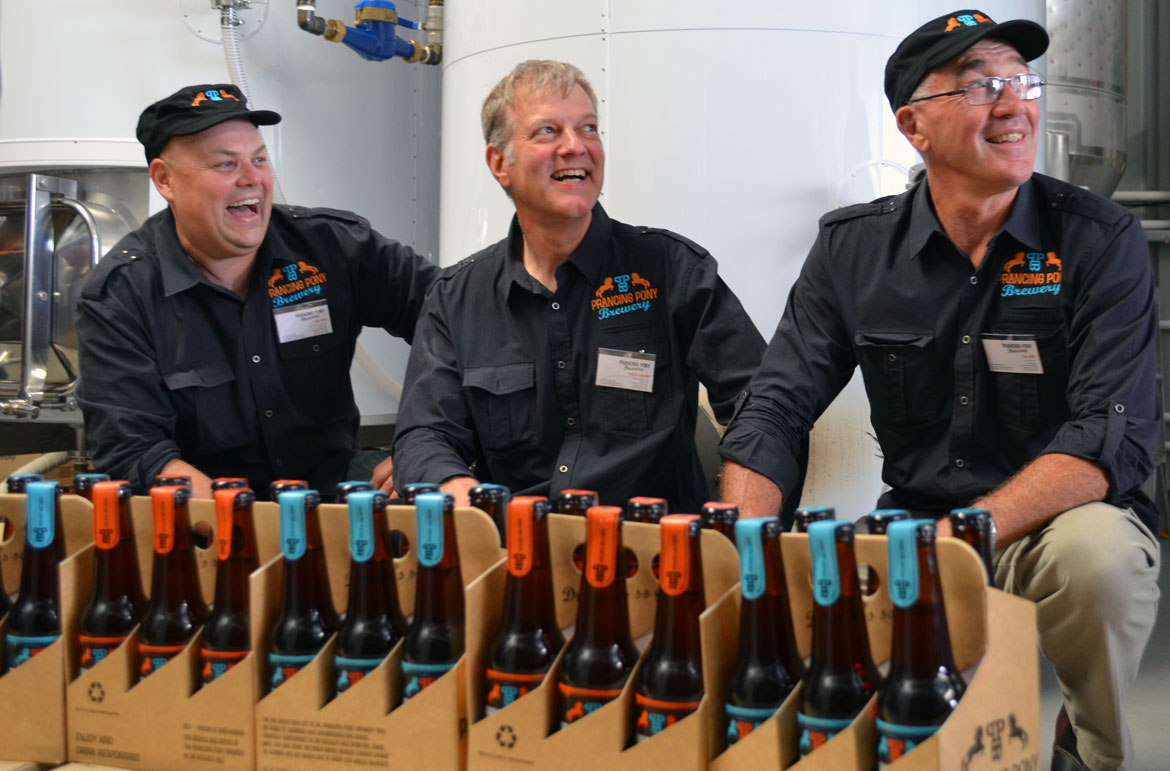 "When we first moved in, we thought, 'This is big!' then last week [brewer] Frank [Samson] yelled out, 'We need more space!'," says co-owner Corinna Steeb.

"It's an amazing journey for us. We've just ordered a new brewhouse and have some new vessels arriving too."

These will help them meeting growing demand not just in SA (they now attract around 1,000 people to their brewery each week alone) but interstate. They've already launched in Queensland and the Northern Territory and are set to announce distribution into Victoria and New South Wales this month too.

"Every single beer scored [a medal] for us," she says, adding that Frank (in the centre of the photo above right) missed the major trophy presentation as he'd rushed off to their stall to share the India Red Ale's win with their staff. "We didn't expect it at all. It was totally a surprise and we were absolutely humbled."

"It's an amazing event for Adelaide and the beautiful thing is it's a 50/50 split of men and women," she says. "We're just so happy to have our own beer festival. The organisers have done an amazing job."