If you've spent any amount of time taking an interest in beer in Australia in the past few years, you've probably come across Jez and / or Sam Fletcher in some way, shape or form.

If you live in Sydney or attend quality beer events and festivals, you may well have shared a drink with them. If you read about beer online, you may well have read something (most likely by Sam). And if you frequent the online world of beer reviewing you'll have done well not to see something by them (at least until they took their frequently literary and lyrical musings to their own quieter corner of the web).

Whether hunting down new beers, taking the time to consider them at length in words and scores out of 100, putting life and soul into festival attendance, or brewing their own beer, they don't do things by half. Just take a look at the online home of their combined beer rating and reviewing for an insight into their passion (or should that be obsession?).

So, without further ado, here they are: The Fletcher Bros – our first Beer Nuts double act...

Location: Sydney, and wherever else the good beer is.

Jez: I've been called all of the above and probably some other choice epithets.

Sam: When I talk beer, my wife calls me a wanker. And what she says goes, so I guess I’m a wanker.

Jez: I first had a sip of my Dad's Hahn Premium at around age eight. I guess it's remarkable that I ever got back into beer at all, really. I've been actively seeking out good beer since around 2002, and homebrewing since around 2004. 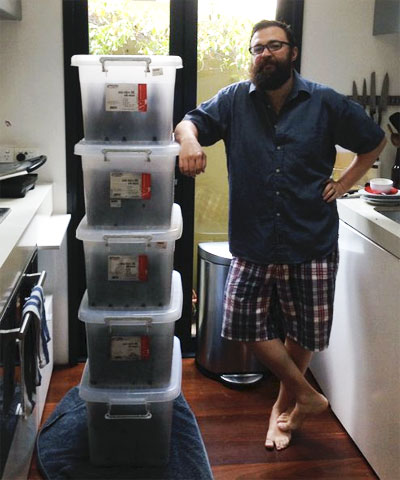 Jez (pictured right with a fresh stack of homebrew): We started up a beer tasting club with our friends in the early 2000s to try to determine what was our favourite Australian lager.

We quickly decided that was a really stupid reason for tasting beer, and our local bottle shop (Cellarbrations in Strathfield) really fortunately had a surprisingly good range of beer for the time, including a large range of strong Belgians.

Sam: In one word: Jez. In many other words, I think I’ve always been dissatisfied with just enjoying something. I have to analyse and criticise the shit out of something while I’m enjoying it. Otherwise I enjoy it less.

The obsession stemmed from trying to assess objectively what the best commonly-available lager in Australia was, and it grew exponentially from there.

Jez: I completed Ballarat Uni's graduate certificate in brewing (while maintaining my full-time job), basically so that my homebrewing would improve.

Sam: Ideally here I’d like to present exhibits A, B, C and D – the spreadsheets I’ve constructed ahead of the GABS festival every year to determine the perfect tasting schedule and order based on about ten different criteria (colour, ABV, anticipated scarcity/popularity, etc) for trying every single beer in three days and giving the most and fairest assessment of each, with minimal harm or numbing of the palate. But that may say more about my spreadsheet obsession than my beer obsession, so I don't know.

[This may well quality as the greatest example of beer obsession we've come across in the five-plus years of Crafty. Excellent work!]

Jez: I used to review on Beer Advocate for many years. It was great until they started messing with the reviewing format every second week. Since then, I've put all my reviews on my own website instead. I won't directly include a link, since it's not ad-supported, and traffic costs me actual money nowadays, but if you're interested, Bing "Jez Fletcher" and you'll find it.

[We've not linked to it either, given Jez's reasons above, but it's worth checking out. Every man and his dog reviews or rates beer in some form online now, including many who wouldn't know a faulty beer if it jumped up and poured bile-flecked butterscotch over their mid-palate. It can make such sites of dubious worth (see Newstead head brewer Mark Howes' take on this). However, these guys know what they're tasting and talking about so if you're seeking a second opinion on a beer...]

Sam: I used to review every new beer on beeradvocate; since Jez invited me to piggyback on his own reviewing website I’ve used it instead. Beers I retry on subsequent occasions I don’t document (although sometimes I’ll revise my ratings or notes), but I want a record of my thoughts on every beer possible.

To bring it back to spreadsheets (who changed the subject away from spreadsheets?), I also keep a large spreadsheet of all of my beer scores that I can filter by country, brewer, style, etc and have a large collection of statistics including a big chart of every beer's ‘Score x ABV’ that shows an interesting curve. If anyone wants to talk more about spreadsheets, drop me a line.

Which beers have most blown your mind? And which have been the worst?

Jez: There have been a few Big Leap Forward beers that I recall: early on, I tried Tripel Karmeliet and was blown away, having only ever really had lagers before that. Soon after, I remember adoring Unibroue's Trois Pistoles. Goose Island Bourbon County Stout was my first huge barrel-aged imperial stout (and still one of the best). My first impeccable barrel-aged sour was Russian River's Temptation. I was also blown away by the very first batch of Feral's Watermelon Warhead at GABS.

Sam: There are many beers that have blown my mind. However, the only beer I’ve ever given a perfect 5 across the board is the Love Buzz Saison from Anchorage Brewing in Alaska (which I recently got the chance to retry [it's the photo atop his Twitter page] and didn’t revise my rating).

Other highly commended include Tripel Karmeliet, Avery Mephistopheles Stout, Feral Watermelon Warhead and Russian River Consecration. I also wrote a lengthy piece once about the first time I tried Yeastie Boys Rex Attitude and how much it blew my mind, so I feel that should also be mentioned here.

[As for the worst,] Crown Lager. As awful as VB tastes, it’s cheap and unpretentious, whereas its overpriced bastard cousin is a glob of over-marketed shite. And tastes worse (seriously, we've held blind tastings where Crown has been rated the worst, even by people who profess to being Crown fans).

Having said that, the first time I tried Carlton Dry Fusion Lime is something I won't forget in a hurry. Oh, and since I know Jez will mention it, we have two bottles of Shady Lady that we have been gifting back and forth to each other every Christmas and birthday (I haven't actually tried it yet). We have a tontine that these will be chugged by the surviving brother at the other’s funeral, although I'm not sure Jez has actually agreed to this.

Jez: Almost none. I do, however, own a VB singlet that someone made me wear during my bucks party.

Sam: Many, but not very many actual branded ones. People have a tendency to buy me t-shirts with beer-related slogans on them of varying levels of wit.

Jez: Most of my drinking glasses happen to be beer glasses in one form or another. I tend towards sturdy, thick-walled glasses nowadays, as our friend (and brewing partner) Rich has a tendency to destroy more delicate glasses from places like Riedel or Spiegelau. 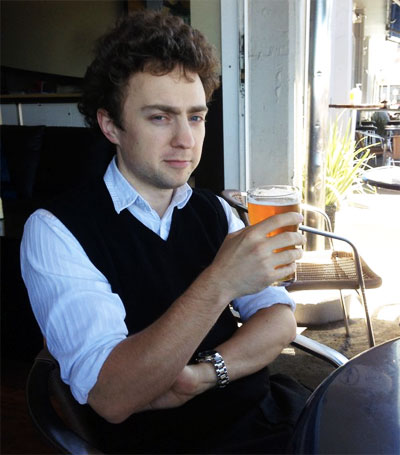 Sam (pictured right): Also many. I have a nice glassware cabinet in my lounge room and a shelf is dedicated to beer glasses. At the same time, I tend to use just one glass for pretty much every beer I drink and the only time others are used is when I have friends round for a tasting.

Jez: My basement probably counts: it's filled with boxes of homebrew (I think I calculated I have over 1,000 bottles that I can't bear to throw out) and all of our brewing equipment is stored there while not in use.

Sam: We have a guest bathroom with a bathtub which is generally full of boxes of homebrew. We also have a framed collage of beer bottle caps hanging on the wall, but not really a ‘shrine’.

Sam: My spreadsheet currently shows 2,323 unique records, but I’d estimate it’s closer to 3,000 including those I haven’t reviewed or entered.

Jez: Too much. Especially if you include homebrewing ingredients.

Sam: I genuinely don’t have any idea. Somebody once asked me how I can afford to spend as much on beer as I do, and my answer was quite simply that I don’t really have any other expenses. My disposable income either goes back into savings or sunk into beer.

Sam: One beer I once wanted to homebrew but never got around to it was something that combined my two favourite flavours – lychee and coconut. Any brewer who successfully manages to pull this off (say, for GABS 2016, hint hint) will have my undying love and admiration.

Thanks, chaps. See you at GABS 2016 if not before. Readers can follow them on Twitter – Jez here and Sam here.

You can check out our other Beer Nuts here. If you know of someone who is deserving of the epithet Beer Nut, then please drop us a line at crafty@craftypint.com. 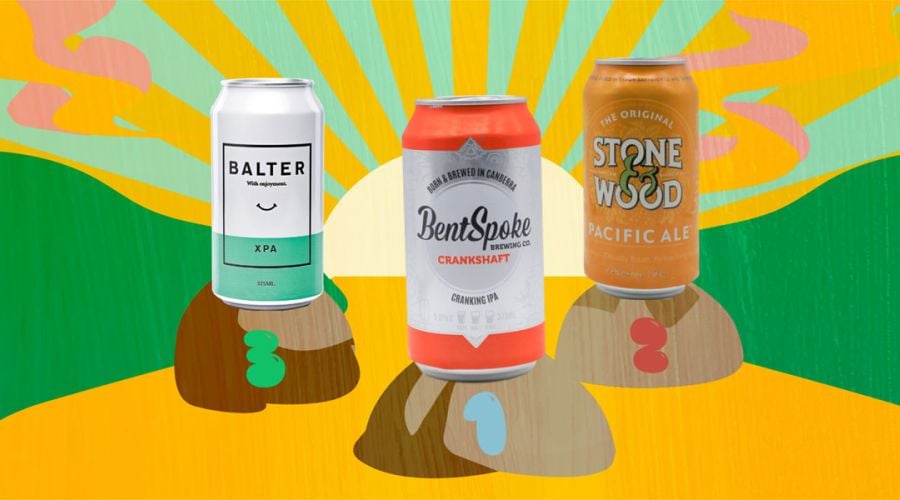