Shortly after the results of the Hottest 100 Aussie Craft Beers of 2014 poll had been announced, Dan "Crafty Kev" McEvilly set himself the challenge of trying them all. As a result, we invited him to feature as one of our Beer Nuts.

A year on, having landed a gig writing about beer for Froth magazine along the way, he tells us about his mission and how the beer world rallied to help his cause.

Why did you decide to set out on this mission?

Honestly, it was a sunny Saturday afternoon and I was parched and in need of refreshment from the amber nectar. I was spoilt for choice at The Local Taphouse and that’s when I saw the list and thought to myself: “Wouldn’t it be a cracking idea to drink every beer on that list?”

So that’s exactly what I decided to do. I can safely say, [it's] one of the best choices I have ever made.

What proved the biggest challenge?

It was midweek and I had been sent to Brisbane for a conference in the CBD. I had precisely 26 hours after travelling just over 920km to complete my quest. With the time I had that wasn’t work related, this was a big ask. I was determined and had no intention of leaving Brisbane until I had locked lips with All Inn Brewing’s Pocahontas & Four Hearts Brewing Pale Ale.

Four Hearts Pale Ale was bottled once upon a time; that time has passed and whatever is left in a bottle is now not worthy. The brew rarely ventures outside the brewery so the only real chance of getting my hands on this was to go to The Pumpyard, which was located in Ipswich 44 km away and I didn’t have a car or the time to get there. So, with blind hope, I contacted the guys at Four Hearts and spoke with a cracking chap called Jim (pictured below).

After explaining my quest and ‘The List’ (above right) to Jim he agreed to hand deliver their finest Pale Ale in an ice cold growler (also pictured below) directly to my hands for my enjoyment on his way back into the city after work. What a hero! 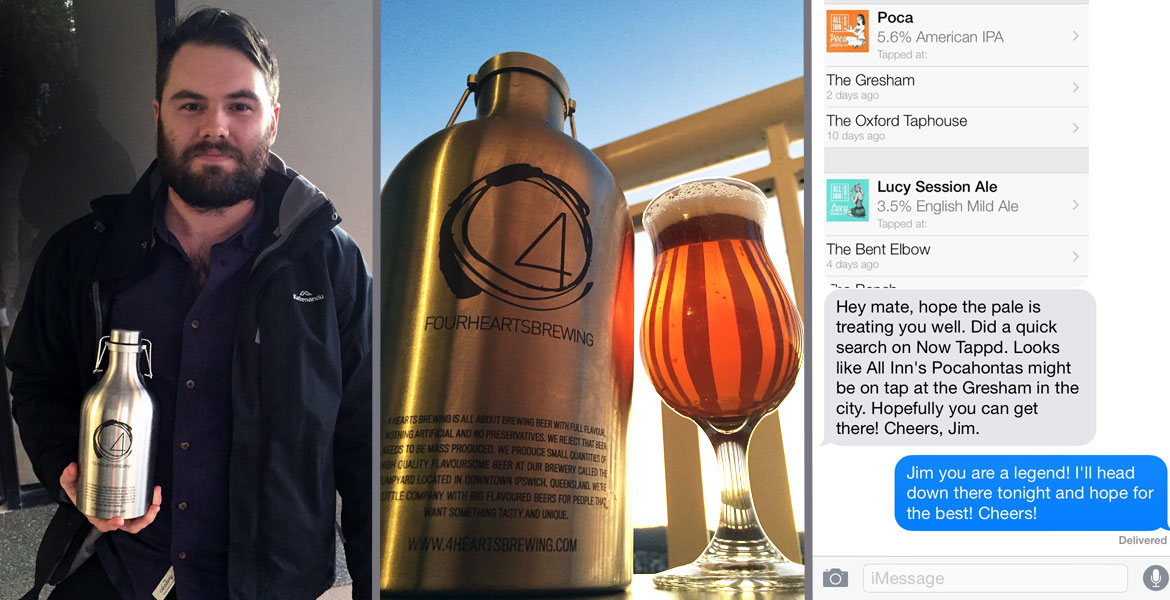 Well, Jim stayed true to his word and at 4.45pm he turned up, ice cold growler in hand. After an exchange of beer related banter and sharing my predicament about locating another brew that very same night he was on his way like a sheriff riding into the sunset.

I had spent hours trying to find a way and the time to get to All Inn Brewing to finally see her with my own eyes and gaze upon the beauty that is Pocahontas. The brewery was only a 10km trip from the airport, which was great news until the cruel mistress that is time showed her ugly face again and foiled that plan. So, once again I found myself calling a brewery begging for beer!

I contacted the guys at All Inn and tried to find a solution. It started to feel like Poca was out of reach. However, it appeared the Beer Gods were with me this fateful night and I was handed a lifeline in the form of a recent sighting of this allusive lady in two separate pubs! All Inn had given me the names of these boozers and I went searching once again in blind hope until I received a mysterious message…

It was Jim from Four Hearts (told you he was a cracking chap!). He had provided me with the proof I needed that Poca was in town and currently residing inside The Gresham. With a new found sense of urgency, I stumbled through the streets of Brisbane, entered the doors of The Gresham and there she was in all her beauty staring back at me.

And there you have it, after sinking nearly a whole growler of Pale Ale and a fair few Pocas I stumbled my way up the various hills that make up the streets of Brisbane and made it back to my hotel. I had completed my quest in just one evening and it was now time to sober up because I had to be at a conference in about six hours then catch a flight back home!

You can’t look past Stone & Wood’s Pacific Ale nor Feral’s Hop Hog, but my favourite beers came from the adventures I had tracking them down. Feral’s Tusk comes to mind, a beer that’s around for the grand total of just a few hours a year in some states. Delivered refrigerated and fresh from the Feral Brewery in WA, four kegs only made their way to Sydney as Tusk Day was upon us! Making my way through Sydney’s mostly volatile rush hour city traffic at an alarming pace, followed by a frenzied dash through the streets, exhausted and sweating profusely I approached the bar and collected my prize. 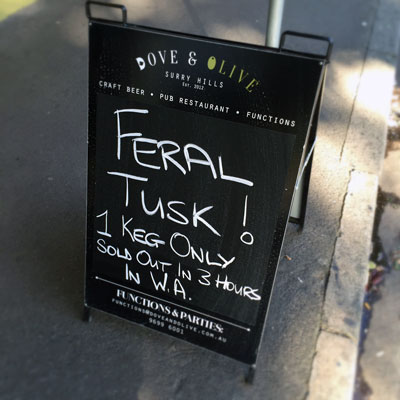 Like the holy grail, Tusk is a divine beauty to behold. Glowing, shimmering, beaming, it’s a mesmerising sunburnt orange and looks fantastic! Like an unwashed pig, the aroma is pungent, although pungent in a pleasant way. Tropical hop aromas battle with the malty biscuit notes to create a well balanced, unforgettable stench. You will only ever have one first sip so savour this moment because it’s a cracker.

Cor Blimey!!! Take a moment to pick your jaw up off the floor and catch your breath and try to comprehend what just happened.

Tusk is incredibly hop driven, backed by a sturdy malt backbone with plenty of pine and grass notes with a tropical hop bite; it’s big and that’s an understatement. Tusk sticks to every crevice in the mouth with a thick, sweet and creamy texture that’s almost oily and leaves you with an ever growing bitter aftertaste. At 11.8 percent ABV, one might call this beer a proper rip snorter!

The biggest letdown had to be my trip to Melbourne to drive the Great Ocean Road (although this story ends happily). So here it was: the day I had been waiting for. It was time to get my hands on Odyssey Tavern's Calypso Pale Ale. We picked up our hire car and headed down south to start our two-day road trip along the Great Ocean Road. After what seemed like an eternity we had arrived on the Surf Coast Highway and Odyssey Tavern was in my sights. We pulled into the empty car park and I ran to the doors with excitement that I can’t actually put into words.

Bursting through the doors I entered the tavern and made my way to the bar. I glanced from side to side looking at the taps, I couldn’t see it, I then scanned the fridge, I couldn’t see it, at this point panic started to set in and I began to quiver. The barmaid made her way out from the back and approached me asking: "Good afternoon, sir. What can I get for you?"

I replied: "Where is your Calypso Pale Ale?"

"We have sold out. We haven’t got any [and] won’t be getting a delivery until next week at the very earliest."

I dropped to my knees in despair, screaming at the Beer Gods: "Why, Why!?!?"

I had travelled all the way from Sydney for this one beer and I was unable to drink it. I was devastated and the harsh reality set in. Knowing that it wasn’t exactly simple to just hop on a plane and drive all the way down here when the delivery eventually arrived, I realised that this beer may well have been the one to defeat me on my quest to drink the Hottest 100 Aussie Craft Beers of 2014. It was a bitter pill to swallow and after receiving this earth shattering news I tried to compose myself and attempt to find a solution to this now monumental predicament I found myself in. 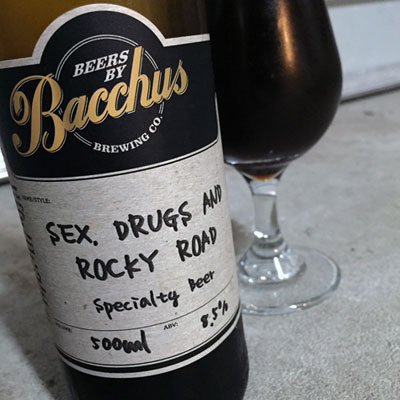 Well, after lengthy discussions I befriended Callum of Odyssey Brewing (legend, by the way) and, as I write, Calypso Pale Ale is in the brewing tank ready to bottled for the first time and will be on its way to me within a few weeks!

I turned to the Dark Side! Last year I would never have touched a Hungarian oak barrel-aged saffron’d imperial red ale, never mind an American oak-aged smokey stout.

The list turned me and all I want now is Sex, Drugs and Rocky Road (from Bacchus) followed by Clout Stout (Nail Brewing) and I even find myself asking Where Strides the Behemoth (Kaiju!)?

Getting my favourites down to a list of five is a monumental task! I’ll give it a crack, so in no particular order my favourites for 2015 are:

Would you do it again?

What an absolutely, magnificently, stupendously cracking year of craft beer education, exploration and adventure it has been. Would I do it again? Hell yes!!!

Dan's final number, once the Calypso arrives and a new batch of La Sirene's Cherie Kriek is ready in May will be 98 out of 100. A truly fine effort. Good luck to anyone embarking on the mission in 2016. While Wellington claims to be New Zealand’s "craft beer capital" and cities like Christchurch and Auckland occasionally stake a claim for the title, the Nelson/Tasman area feels like its home. Our Man In NZ Jono Galuszka recounts his weeklong road trip through the area, read on