As Australian breweries turn their minds ever more towards the alchemy of barrel ageing, those holding the barrels find themselves in hot demand. Melbourne’s own New World Distillery – creator of the internationally renowned Starward Whisky – is quickly making its mark in the beer universe thanks to partnerships with a select number of Australian breweries.

The origin story of New World Distillery hits a few similar notes to those of burgeoning craft breweries. After eight years working behind a desk, founder David Vitale hits the road with his fiancé in search of inspiration. Making his way to Tasmania, he entertains ideas of setting up an organic brewery. But the stars seemed to have something slightly different in mind, as a chance meeting at a Tasmanian micro-distillery sends him in a new direction. Upon his return to Melbourne, he finds a group of willing investors, and starts plotting the way for a whisky distillery in the Melbourne suburbs.

However, where young breweries can be producing a product for sale in a matter of months, whisky requires significant reserves of patience. Those first steps were taken in 2004; the first whisky was released in early 2013. Since those early days, a converted Qantas aircraft hangar in Essendon has been transformed into a whisky drinker’s mecca, with sherry, wine cask, and experimental releases all available over the distillery bar as you take in the sight of barrels stacked upon barrels stacked upon barrels.

Where many distilleries would open their doors with a gin or vodka offering to keep the lights on, New World steered clear of that approach.

Paul Slater (above right), the distillery’s marketing manager, says it was a very conscious decision.

“The way that we set things up was to get more financial backing and focus purely on whisky to avoid getting distracted.

“You might not have cashflow at first, but you’re better off in the long run to stick to your guns and ride it out, so you can create a product you want to continue on with in the future.”

He admits many would see it as a slightly insane approach to business.

“It’s a little bit crazy in a way. You create this product, and just hope and hope that after three years it tastes alright, and people will actually want to buy it. Luckily they did. If not, I’d hate to know what would’ve happened.”

But the patience paid off. Their flagship product, Starward Whisky, is now aged in both Apera sherry barrels and red wine barrels and readily available across the country and overseas. On top of that, their wine cask expression was recently awarded Best Australian Single Malt Whisky at the World Whisky Awards. The Apera expression came second.

“What we’re doing is bringing to the table a style that’s quite approachable really. It’s not too far flung or too shocking to anybody’s palates,” says Paul.

“Our first release, the Apera, was well received straight off the bat. But when we had more confidence and understanding of our own product and went ahead with releasing the wine cask expression, that was more of a big deal.

“Sherry barrels are pretty common, but this red wine barrel maturation is a new thing. Using 100 percent red wine barrels is our niche, and where we really come into our own. Nobody else is out there doing that.”

Distillery manager Sam Slaney (pictured left at top) was the first man to join David on the New World team, and says it didn’t take long for enterprising brewers to come knocking once barrels were being emptied. The whole distilling team had a background in beer, so making connections with the right breweries was easily done.

The first barrels went to Boatrocker, where a former New World distiller had joined the brewing team. They would be loaned barrels for the production of barrel aged beers on the condition they were well looked after and returned to New World in one piece.

Those Starward barrels were to be put to the test for Boatrocker’s big idea at the time – a barrel aged imperial stout that came to be called Ramjet. And we all know how that turned out.

The demand for barrels has grown significantly, particularly in the last three to four years, Sam says.

“At the start of our business, it was just a bit of a novelty in Australia. It’s interesting to see where barrel ageing has gone over that period of time.

“No one really did barrel ageing of beer, it was more a case of running a beer through a bourbon barrel and bringing it back out. But that’s really shifted now, people are focusing on exploring the ageing process, opening barrel rooms, and really looking at the fermentation of barrels. It’s a really changed landscape even in just the last three or four years. That shift is really big.”

But simply passing a beer through a barrel can become a monotonous concept for a distiller, so New World instead focuses on building strong and dynamic relationships with breweries, he says.

“If there’s nothing special about the beer, other than the barrel ageing itself, it can get pretty dull – especially if that beer gets over extracted or overaged. Where’s the excitement in it?

“It doesn’t immediately equal a fantastic beer to put two things together, you want to see refinement, you want to see finesse and interest and development from the brewers as well. The cream rises to the top in those relationships.”

The relationship with Boatrocker in particular has gone from strength to strength, with Starward barrel aged Ramjet now in its third vintage.

Head brewer Matt Houghton believes the relationship has developed because there is a mutual appreciation for the importance of quality.

“I think we have similar mindsets of barrel experimentation, with a clear focus on producing delicious barrel aged beers or spirits.

“In return, we do everything in our power to make sure those barrels are well looked after and returned in pristine condition, as well as making sure there are plenty of samples of Ramjet available to them, of course.”

Beyond Ramjet, which was released for the third time in April, Matt has also found time to drop some more experimental brews on New World’s doorstep.

Bottled Alpha Queen left at a contract brewery during Boatrocker’s move to their Braeside premises was decanted – all 3,000 litres of it – and handed over to New World to distill into 200 litres of spirit, which has since been sitting in barrel for two years.

“It’s officially whisky now, the result is very unique. The wood presence isn’t too strong, but the hop character comes through, with touches of lemon meringue to it.”

Ever patient, Matt and Sam are leaving it to age for another year to let it develop a woodier presence.

Other projects between the two companies are in the wings, including a potential run of Ramjet whisky, and one project Matt is keeping under wraps.

“They’re growing rapidly and their whisky is of incredible quality; it’ll be interesting to see how things develop," says Matt. "Hopefully they’ll still have enough space for us to squeeze a run of Ramjet whisky through there one day, among other things.”

For Sam and his distillery team, partnerships with breweries do not have to stop at whisky. 3 Ravens recently released a New World collaboration gin titled Project 55 Beer Garden Gin with a hop profile matched identically to their 55 American Pale Ale.

While not a product New World usually focuses on, when head brewer Brendan approached them with the gin’s concept, it was an easy thing to agree to.

“Brendan’s really keen on flavours and hop extractions and so on, and had this beautiful concept of what he wanted to bring to life," says Sam. "For them, and for us, first and foremost it’s about the product.

"Those kinds of projects need to be something interesting, something that hits the sweet spot where it will benefit both us and the brewery.”

With breweries beginning to explore in more depth the characters that barrel ageing can bring to a beer, Sam believes New World will likely continue to cement the connections already in place.

“You could easily spread yourself pretty thin, but it’s better to really build on things and making sure the brewers are getting the most out of the relationship that they can.

“Having our barrels everywhere would also mean the name Starward would lose a bit of its value,” he says.

“Instead, we want to work with people doing interesting stuff, proving they want the barrels, not just thinking ‘Oh, I could stick this in a barrel for a bit’. That’s where we are going, and it’s important to know that’s where they’re going too.”

You can learn more about the magic of barrels, beer and whisky at a number of Good Beer Week events featuring Starward: 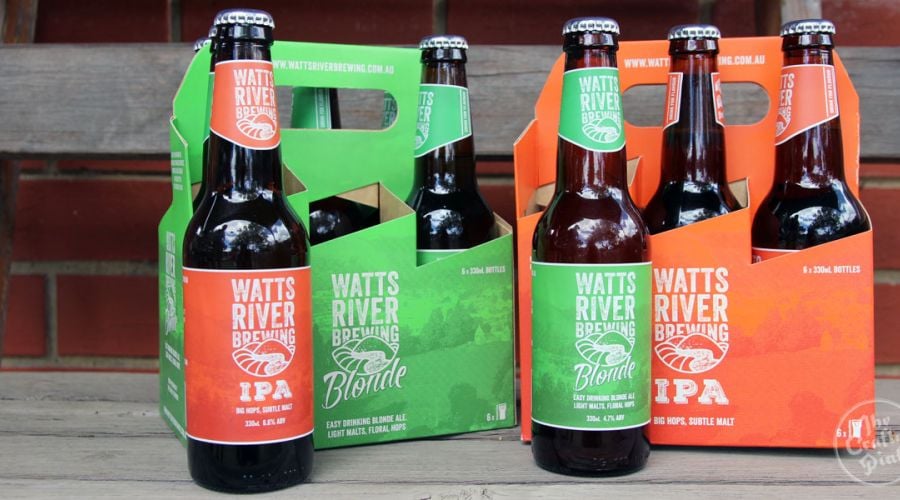