While some might have forecast the renaissance that beer has been enjoying globally, would many have predicted the rise of sours?

Haslett-Moore also has a kettle-soured beer on the way at his Northend Brewery – about an hour north of Wellington – and as it went into the fermenter he posted to Facebook: “So we now have 25HL of sour beer in the tank. I have no fear about this selling, but damn how things have changed for that to be the case.”

We’ve been hearing talk of the sour beer surge for a few years and Haslett-Moore’s Facebook comment seemed to indicate the global tsunami of sour was finally washing up on our shores. “There’s a lot of excitement, a lot of sales,” Haslett-Moore said.

“As craft beer grows and as we branch out to different sorts of people enjoying beer, a big key is to show beer in its full variation and to show people that it doesn’t have to be bitter.”

Haslett-Moore says his sour beers have been transformative to an unwitting audience. “A lot of people who hated beer – you give them a sour beer and it turns a light on in their head.”

“We’ve got 12 barrels in the wood cellar and more coming – and these are all beers that started out as clean beers and went into wood with bacteria and wild yeast and were soured in the wood in that Belgian tradition.”

His kettle-soured beer, an Oud Bruin, is a Belgian style done with German methodology, half kettle-soured and then blended with another batch, the two halves being boiled together with fruit added.

Haslett-Moore says the growth in the sours – globally as well as locally – has caused leading brewers to think about how the beers are described, with Haslett-Moore among those who want a better lexicon for these beers as the one word catch-all of "sour" doesn’t do justice to the range and style available. From German Gose and Berliner Weisse, to Belgian Lambic, Gueuze and Flanders Red, to American wild ale – at the moment all are caught in a common umbrella.

“We use sour to describe a whole bunch of different styles and approaches to beer – the term is not specific enough. A lot of these beers are not even in the same family

“Berliner Weisse and Gose are reimaginings of basically extinct German styles, and there’s a bunch of stuff influenced by Belgian styles, that while not extinct looked like they were endangered, and they are very different approaches.”

As a devotee of barrels, Haslett-Moore is quick to pay tribute to Soren Eriksen at 8 Wired and Steve Plowman at Hallertau for leading the crusade to wood.

“Soren’s had an important role to play in driving the New Zealand beer market to places America has already gone – he did it with hops, then big, strong, barrel-aged things and sours – it takes pioneers to push things.

“And Steve really started things with his Porter Noir, which would have been the first such beer I remember.”

On the sour front, there’s a lot happening in other breweries, with Hallertau recently doing a sourdough bread beer, 8 Wired have their Wild Feijoa Sour and at GABS introduced their hoppy sour, Palate Trip, while Moa’s top-notch Sour Blanc and Cherry Sour are now out.

And if there was any doubt about the direction of the industry in New Zealand, the announcement by Garage Project that they will building an entirely new, second brewery in downtown Wellington specifically for wild and barrel-aged beers was the clanging bell of realisation that, yes, sour is the hour.

Garage Project team will be bringing in five foeders [large wooden vessels] from Europe and will put a Belgian coolship – a flat, wide, wort-cooling tank exposed to wild yeast – at the top of the building.

The question is whether this wild adventure will remain the preserve of a few dedicated brewers or spread further afield.

“Passion leads it,” Haslett-Moore says. “As the market increases maybe there will be a bit of that [big brewers doing it] but there’s a lot of work, a lot of expense and a lot of risk involved in doing these things in your brewery – unless you’re really passionate and driven to do these beers there’s a lot to put people off.

“In all the talk of big breweries getting in on craft, barrel-aged beer was seen as one area where they’d never encroach as it struggles to stack up financially – but now Goose Island in the United States has one of biggest barrel programmes and they are owned by AB InBev.”

The main reason barrel-ageing is costly is simply the time is takes to let the beer mature on wood, with conditioning times of one, two or more years not uncommon.

As well as large range of sour beers hitting the market, the quality is also there.

Eriksen recently told Beertown.nz: “I can’t remember the last time I had a bad sour beer. People must be being careful about what they are releasing – if you’ve been keeping it for a year or two there’s no rush in getting it out.”

8 Wired brewery has over 250 oak wine barrels and another seven foeders that range from 2,000 to 4,000 litres. As a result, the Warkworth brewery has the largest range of barrel-aged and sour beers [in New Zealand] including Batch 2.18 Imperial Stout, and the famous Grand Cru Belgian Quadrupel, which started out as The Sultan, and was aged in pinot noir barrels with brettanomyces and pediococcus cultures for 16 months.

At Moa, brewer David Nicholls started on Moa’s sour series in 2008, making it the oldest commercial sour beer programme in the country.

“It was small scale to start with and this year I’ll end up with more than 5,000 litres of the Cherry Sour and the same of the Sour Blanc," he said. "This year I purchased something like 1.4 tonnes of cherries. The Sour Grapes uses Sauvignon grapes from my vineyard (outside Blenheim).”

Because sour beers use wild yeasts there is always a risk of cross-contaminating beers that are not meant to be sour so brewers either have to bottle at a separate facility or make sure everything is super-clean.

“You’ve got to know your bugs, that’s for sure. I’m lucky to have some pretty good micro-test gear which enables me to check for cross-contamination. I’ve also got the luxury of having separate pumps and hoses for the sours,” Nicholls said.

After bottling his Cherry Sour and Sour Blanc, he spent a week cleaning and maintaining his bottle filler before testing it ahead of resuming normal production. It’s a labour intensive and time consuming process.

“Sours are here to stay. We’re growing our volumes and we wouldn’t be doing that it if it wasn’t selling. You see that first hand in our cellar door, it’s a beer epiphany moment for some people – ‘This isn’t beer!’ You see lights turn on, it’s great.”

Michael Donaldson is the editor of the SOBA (Society of Beer Advocates) magazine. He is also the author of two books, Beer Nation: The Art & Heart of Kiwi Beer and The Big Book of Home Brew.

If you'd like to read more on the New Zealand beer scene, why not check out Nick O's four part tour of the lesser travelled roads of the North Island. 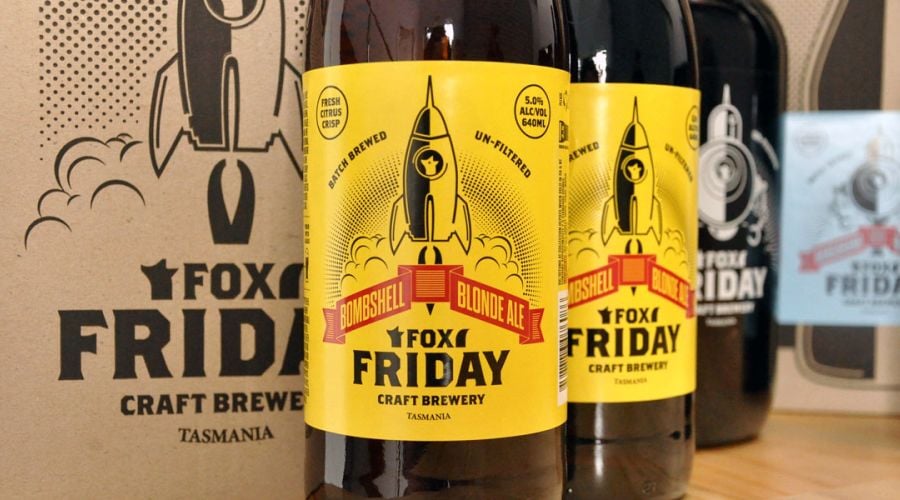 Having swapped New Zealand for Australia during the GFC, a Wellington couple has found themselves striking out in a new direction at the foot of Mount Wellington. We meet the Clarksons as they launch Hobart's newest brewery, Fox Friday. read on