When looking to explain the brewing process to a newcomer, you will often hear people employ cooking allegories, for example, asking people to think of hops as the spices added to a beer. So it's perhaps little surprise that, as the popularity and awareness of craft beer has grown, brewers and chefs have been keen to collaborate.

That was the case recently at Stomping Ground in Collingwood, where they invited Paul West from SBS show River Cottage to head into the kitchen for a beer dinner. Part of the arrangement was that he would also visit the brewery in advance and help create a beer to be launched on the night.

Prior to mucking in on brew day, he says his experience of making beer was limited to a mere handful of tiny all grain brews with various friends.

"The guys said they'd love me to do a beer," says Paul (above left). "I told them I can't give you a recipe because it's not my realm of expertise, but I knew that the beer would be released around springtime and reverse engineered some tasting notes."

"When Paul first came to have a discussion, he suggested a theme along the lines of spicy, funky, aromatic with a full body," says Stomping Ground head brewer Ashur Hall (above right), who spent a year working in a kitchen when he was 19 before, as he puts it, "leaving it to the professionals".

Given that starting point, Ashur felt it made sense to follow a farmhouse theme, especially with the River Cottage connection, so they agreed upon the saison style, one that would look to feature ingredients that were in season. That led to 40kg of oranges being grated, turned into a concentrate and then added to the whirlpool and the fermenter, while Grains of Paradise, coriander and citrusy hops completed the picture in what would become the Saison a l'Orange.

"When you are working with a brewery like Stomping Ground, you can brew whatever you want," says Paul. "A saison satisfied the criteria as did using oranges, because they are at their peak at this time of year."

The beer was paired with the main course – Orange Roast Chicken – with the courses either side presented with beers from the brewpub's extensive core lineup.

In designing the menu, Paul says the idea was to link it to the change of the seasons – to the spring equinox and the pagan aspects that surround it. As for the specifics of pairing the dishes with the beers, he decided to create something that would be complementary to the collaborative brew.

Looking ahead, with River Cottage finished, the chef's intention is to move back to Melbourne and start "telling the story of urban food and bringing the ethos from what I was doing on the coast to the city."

There is also talk of making these collaborative dinners quarterly and seasonal but, if you would like to try try the pairings from the first one at home, you can with the recipes below.

Place pork in a baking dish and add herbs, spices and liquid. Place over a medium heat and bring the liquid to a simmer, remove and cover and then place in the oven.

Shred the pork and add a little of the fatty liquid to bring it together. Check the seasoning then transfer to two jar/bowl/serving vessels. Pat down flat and top with the clarified butter, place a sprig of thyme in the centre and then place in the fridge to set.

Remove from the fridge four hours before serving to bring to room temperature.

Place the veggies in individual containers and pour over the hot liquid. Cover and refrigerate until ready to serve.

Combine yeast, sugar and water in a bowl and leave to activate.

Place spent grain in a mixing bowl and add the active starter. Combine while adding the bakers flour until a dough forms. Knead until smooth and elastic, then cover and place someplace warm to proof.

Once doubled in size, knock back, then shape into a round loaf and allow to proof once more.

Score the top of the proofed loaf and transfer to a hot baking tray. Bake for 30 to 40 minutes.

Place chicken on a roasting tray.

Combine the orange juice, cumin and honey to make the basting liquid.

Brush the chicken liberally with the basting liquid, making sure you have plenty in reserve. Place in the oven and bake for 10 minutes. Remove and baste again, repeat for times then lower the heat to 160C. Cook for a further 40 to 50 minutes, then remove and rest.

To serve, joint the chicken and arrange on serving platter and season with salt and pepper. Spoon over any pan juices and sprinkle over the chopped parsley.

On the night, Paul served the dish with a Cos salad, cauliflower salad and roast potatoes.

Cut the rhubarb into batons and place it into a large mixing bowl along with 50g of the sugar. Give everything a good toss and leave to macerate for 30 minutes.

Combine the sugar, butter, zest and juice in a mixing bowl and beat. Add the flour, almond meal and baking powder and beat until smooth. Fold in the rhubarb and juices, then transfer the mixture to a lined baking tin.

Smooth and flatten the top and then sprinkle over the flaked almonds. Transfer to the oven and bake for around one hour. If the top starts to brown too quickly then cover with foil.

Remove from the oven and stand for ten minutes before allowing to cool completely on a wire rack. To serve, cut into portions, dust with icing sugar and serve with a scoop of vanilla ice cream.

You can check out past beer and food features here. 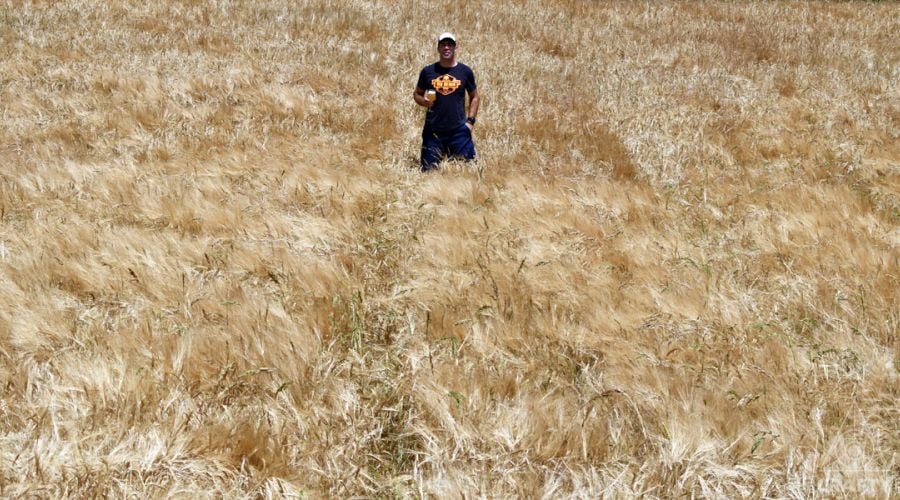