It's time for the results of the second leg of our pale ale blind tasting. Two months ago, we looked at Aussie brewed American pale ales; this time around, it was those going under the banner of New World pales – or, in some cases, what some might term contemporary Australian pales.

The New World category was introduced at the Australian International Beer Awards (AIBA) for the first time in 2016 in response to the broadening of the wider pale ale style, while there's an International Pale Ale category at the annual Craft Beer Awards into which some of these beers would have been entered.

For the purposes of this tasting, we looked to include beers in which Australian and/or New Zealand hops contribute the dominant hop flavours and aromas. That said, there's a growing number of hop varieties from other countries that create similar characteristics so the beers we assessed aren't exclusively brewed with Aussie or Kiwi hops. However, they are included because brewers nominated them for this tasting or they were entered into appropriate categories at the most recent AIBAs and Craft Beer Awards.

There are also beers in here that their brewers (and indeed drinkers) will feel could sit in either American or New World camp (or another one entirely) but our intention was to put as many locally brewed pale ales to the test, hence the two sittings over two months. It does mean there's a pretty broad spectrum, from lighter, subtler beers that might be termed summer ales to those with similar punch to American pales but different hop profiles. As such, we looked to serve them in an order that was fair to the gentler ones.

With so many potentially eligible beers available in cans and bottles now, we again went through a multi-stage process to select those that were put before the panel. This involved:

The judging and sourcing of beers followed the usual methods – outlined here. As in the past, we attempted to buy as many of the beers from retail as possible in order to reflect the experience of our readers. This wasn't always possible but below you'll see where beers were sourced from and their packaged on or best before dates where possible.

There's an argument that the brewers who get to send their beers direct have an advantage over those that are picked up from trade. This time around, with couriering and deliveries taking place when temperatures were nudging 40C, this may not have been the case.

There weren't so many take homes from the tasting overall as last time around. While it's less than scientific to compare the scoring from one panel to the next when the makeup was 50 percent different from one to the next, the scores were generally higher than for the American pale ales. Maybe there's more fresh stock in trade and higher turnover of such beers now beer drinking weather is back; when putting together the lineup, there was also a high number within this broad church that had picked up gold medals in the past year, suggesting they're beers a lot of brewers are making well.

It's reassuring to see packaged on or best before dates on more and more beers as time passes – here 20 of the 27 beers tasted had some form of date stamp – one brewery has even printed "FRESH IS BEST" on the base of its cans. And, while we'll always stick by the "Fresh is best" mantra when it comes to such beers, it was interesting to see how some of the beers at the upper end of the table had a few months age on them but were holding up well.

There was a similar split of cans and bottles – 16 of the former; 11 of the latter – like the APA tasting and, as with last time, cans dominated the upper half of the table. Anyway, on with the results...

It's been a good little run for Nail Brewing in our blind tastings. Nail Red finished second behind Modus Operandi's Former Tenant in the public event we hosted as part of WA Beer Week recently and, here, the brewery's VPA (Very Pale Ale) came out on top, finishing a full point out of 25 ahead of Two Birds Pale Ale (the evolution of Oaty McOatface) in second. With a best before of June 2018, the VPA cans we poured had five-and-a-half months age on them, making the result that bit more impressive.

(If you haven't already, you should check out our recent interview with Nail founder John Stallwood about where he's headed now his business partnership with Feral has been ended by the latter's sale to Coca-Cola Amatil)

As ever, Balter's XPA was up there, Hop Nation continue to back up their name, Little Creatures' Dog Days added to our puzzlement as to why it's not a bigger seller for the brewery and a mix of familiar and less familiar faces filled out the remainder of the top half of the table. Rather amusingly (well, for us anyway) was Young Henrys and Grifter getting the exact same score as they used to brew under the same roof.

The other beers included in the tasting were (in alphabetical order):

NB At the last minute, we included a beer brought along by one of the panelists in order to provide feedback for them. As the beer wasn't in the original lineup and is only becoming available in packaged form in retail this week, it wasn't technically eligible for the judging so we have excluded it from the results article. It did fare well, however, so keep an eye on the New Beers section this week to find out which beer it was...

Thanks to the six judges for giving up a Friday night, to The Terminus for hosting us and to Anna for assisting with the stewarding. We're still deciding which style to open the 2018 series with but, in the meantime, if you're in Melbourne you can join us for the public leg of this at Tallboy & Moose on December 13. Crafty Cabal members can pick up discounted tickets too – while stocks last. 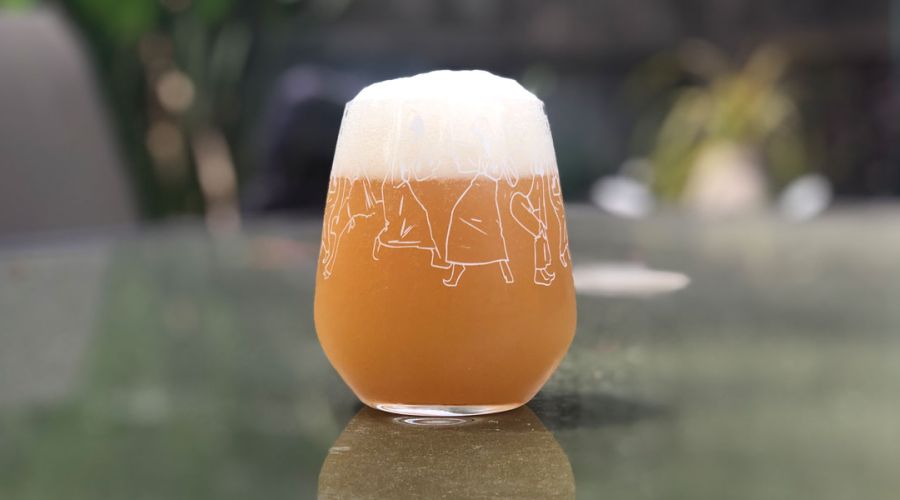 Hazy pale ales look set to be one of the styles of 2021 as more and more breweries add them to their core offerings and drinkers embrace their juicy, fluffy, fruity sessionability. But just what are they? read on