At a time when multinationals are buying local breweries and other beer businesses, indies are snapping up other indies, hospitality groups are buying or launching their own beer brands and new breweries continue to spring up almost weekly, there's much discussion as to how the Australian beer landscape will look in the future.

When it comes to viable business models, the underlying mantra remains pretty much the same as ever: brewpub good; well resourced, large scale production facility good; those in the middle... good luck.

Of course, things are never that clear cut and, as we've written elsewhere, it's less shades of grey we're dealing with these days than dimensions of grey. But, in looking at the viability of breweries from nano or pub through mid-sized facilities to the larger regional operators, the likes of Barrow Boys and West City Brewing (one closing, one reborn as per this article) are excluded from the discussion.

Yet there's plenty of beer filling taps and fridges from gypsy (or cuckoo or contract) brewers. So, as competition intensifies, as growth in the volume of locally owned and brewed beer continues to outpace the number of outlets selling it, and as Big Beer fights ever harder to protect its market share, will such businesses face the squeeze in the same way? Are the challenges facing them different to those with stainless steel breweries of their own?

"It's something I've been reflecting on a lot," says Kevin Hingston, one of the owners of Pact Beer, the Canberra operation that won Champion Gypsy Brewer at the 2017 Australian International Beer Awards and which is currently weighing up whether to open a venue in the Australian capital.

"The industry has changed an unfathomable amount in the three years since we started."

Referencing brewery buyouts and the arrival of significant new production facilities like Brick Lane, he adds: "I've come to the conclusion that someone starting out in the way we did now wouldn't be able to make a go of it. We've got three years of momentum behind us, but it's getting undeniably tougher."

Certainly, casting a glance over the past few years, it seems life within the world of gypsy brewers moves even faster than in the beer world generally. There are brands that have come and gone, some without many people noticing. Remember Three Troupers? Or Dilettante Beer Co? Or Malt Fiction? Or Boneyard Brewing? Or Birbeck's? Or Yowie Lager?

Then there's more prominent ventures like BrewCult, which ceased operations early in 2017 but, with the brand under new ownership, may yet reappear like West City Brewing, and Hawthorn Brewing, acquired by Dixon Hospitality (since bought by the Australian Venue Co) last year, and Dennis Beer Co, which has just made a comeback – possibly temporary – after a hiatus.

Meanwhile, there are plenty of others who have successfully launched a brand using other breweries before opening their own, including regular champion trophy winners such as Boatrocker, Two Birds, KAIJU! and Black Hops. And, of course, there are those with runs on the board who continue to flit from brewery to brewery, the likes of Shenanigans, Edge Brewing Project, Doctor's Orders, CoConspirators and Ocho.

It's easy to understand the appeal of launching a brand in such a manner.

"From a capital perspective, starting off using someone else's facility is a way to get your brand and product out there without have millions of dollars to spend or chasing investment or backers," says Sam Füss, head brewer at Philter, the Sydney based operation that's amassed multiple trophies since launching in March 2017, including the 2018 AIBA Champion Gypsy Brewer title (see photo at top).

The approach offers brand owners a degree of nimbleness too; less time in a brewery, more freedom to focus on selling, marketing and meeting customers.

"The agility that gypsy brewing afforded us meant that we chipped in the cost of a small car each at the start – not the cost of a small car factory," says Kevin. "This has allowed us simultaneously to have viable pathways to create fun, creative, super small batch beers – 600 litres of seaweed or cookie sandwich beer for GABS was scary enough – and, at the same time, brew with ABG [Australian Brewers Guild, the contract side of Hawkers] at quantities that make wholesale package viable.

Yet there are unique challenges. The "without steel you're not real" attitude may have subsided a little (the success of then-gypsy operator internationals such as Mikkeller, 8 Wired and Evil Twin no doubt playing a role in changing perceptions a few years ago), but there are different parameters for those without steel.

The cost of a gypsy's beer when it leaves a contract brewer's facility is greater than the cost of that brewer's own beer as the producer is passing on many of their costs. But the gypsy brewer's more expensive keg, bottle or can is still being sold into the same marketplace. And it's a marketplace in which, as one brewer put it, "there are beers from the big boys being called craft and some of our not-so-big peers dropping their pants to mind-bogglingly low rates we can't afford and we have more self respect than to devalue our babies so much".

There's also the risk of losing a contract brewing partner, either permanently if they decide to work with someone else or focus on their own beers, or temporarily if they need a tank urgently. Furthermore, a gypsy has no home base from which to tell their story, meet consumers, entertain and educate retailers or trial new beers. Then there's potentially the challenge to maintain consistency brewing the same beer at different sites.

“The obvious issue is access to tank space," says Justin Spicer (second from right above), one of four mates from the Merri Mashers homebrew group that launched Old Wives Ales in 2015, "so that’s always been a priority to us and the approach we’ve always taken for that is making sure we build good relationships."

He says being free to brew new beers and unusual styles allows Old Wives Ales to play to its strengths as a small operator too.

"Because we are quite nimble and don’t have to be churning out tens of thousands of litres of lager to just stay alive, we can work around it," Justin says. "It also allows us to pivot with the market as it changes.

“I think that’s going to be important as more and more craft beer drinkers come in and the existing ones are always looking for that new thing.”

With flexible working lives outside their brewing company, none of the foursome is working full-time on Old Wives Ales. It's a common situation for such brewing companies, where the beer brand operates parallel to other jobs. It's a different scenario at Philter, however, where Sam and co-founders Mick Neil and Stef Constantoulas have all been fully involved in the business since last March.

"That's been fundamental for us to grow the business," Sam says. "While we do wear a lot of hats, as you have to, we couldn't have grown as quickly as we did without 100 percent focus."

Already, they've grown to a point where they would have to build a major production brewery to maintain supply – they're jumping straight in with 140 hectolitre batches of a forthcoming new release, for example – so instead they're looking for a smaller home, in a similar manner to Fixation Brewing. In Fixation's case, the majority of beer will continue to be brewed at Stone & Wood but the soon-to-open Incubator brewpub in Collingwood will give the brand a home and a place for its brewers to create new beers.

"We've got to the point where we're starting to look at investment from outside so we can grow," Sam says. "Put more funds into marketing, get some more road warriors, and look for a site for a house of worship for us, which is important for us and for our community."

It's a common route for gypsy brewers, whether it's one that ends in opening a brewpub or a production facility or becoming a partner in one, like Wolf of the Willows with Bad Shepherd, Nail with Feral or Exit with KAIJU! But it's not one all have followed, with Old Wives Ales among those happy to focus on releasing and selling new beers, building relationships with brewery owners and others across the industry instead of building a venue.

As the Pact team weighs up whether to build one in Canberra, Kevin says: "Scotty [Morgan, former head brewer at Rocks Brewing, whose owners have involvement in three Sydney pubs] helped me realise a venue is like a safety net.

"You could run a wholesale only operation if you're doing it as a vanity brewery or on a hobby level. Or if you're coming from the beer community, like Brewtal in Queensland, which started at The Scratch and where Tim [Goulding] brews for Newstead and puts out Brewtal releases here and there."

Ultimately, as with any form of brewing company, it's about getting the package right in any particular set of circumstances. As Sam says: "It's about being smart."

In the case of Philter, Sam travels weekly to the brewery producing her core range beers and is in constant contact with the brewing team when not there in person to ensure consistency.

Meanwhile, Philter's regular trophy wins have made opening doors at the country's major retailers that bit easier and helped demonstrate just how fast a gypsy operation can achieve volume and success. So, while things may not have worked out for the likes of Barrow Boys, BrewCult or West City Brewing (at least first time around), for all the challenges that exist, the gypsy caravan likely still has some distance left to run. 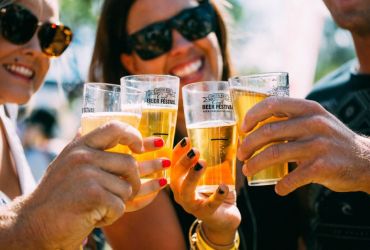