Time spent in America or Canada has inspired plenty of Australians to return home as budding brewers. And it's not just brewers who have been inspired by the beer scenes in North America.

Jessie Jungalwalla worked with craft breweries while living in Vancouver and, after returning to Australia in 2015, launched Craft Instinct in September 2016. It's a branding agency focused on making the beer (or spirit or wine) in your hand look good.

Since launching, her beer world clients have included the likes of Hargreaves Hill, Blackmans Brewery, Alice Springs Brewing and – full disclosure – The Crafty Pint, with Jessie responsible for the full rebrand we launched in April 2017 and ongoing design elements of all things Crafty, online and off.

During her three years in Canada, she worked on graphic design for Big Rock Brewing and, when looking to move back to Victoria, Jessie reached out to local breweries; based on the number of replies she received, working in the Pacific Northwest appears to carry some weight.

“Surprisingly, they all got back to me and said they wanted to speak to me,” she says. “As someone who was a graphic designer for years in Melbourne and who was trying to do freelance for years, that never happens.”

Jessie, who enjoyed success as the drummer in Jungal, a band she formed with her sisters, and still plays live with other musicians when time allows, assembled a pack of creatives, designers and the technologically capable to launch Craft Instinct. The aim was to offer marketing, web design, videography, photography and social media services to the craft booze world within an operation capable of being as nimble as those typically small operations.

“I felt like there was a gap in the market with what we were offering,” she says. “Breweries could either go to a fully-fledged marketing agency and pay $100,000 to get a brand design, or they could go to a solely freelance designer and pay $2,000. But there’s nothing really in between that.”

It means Craft Instinct has worked on brands from their inception, such as Alice Springs Brewing, Grassy Knoll (Sydney) and Grand Angus (Tasmania), and on rebrands, as was the case with Hargreaves Hill.

“It’s always fun to start with a blank canvas but there is a really beautiful challenge involved with a rebrand,” she says. “The brewery already has something special going on and the rebrand is about keeping that special thing alive for them.”

What’s important for any brewery, she adds, is to make sure they understand their own story and brand. As new breweries continue to opening, it’s becoming harder to stand out and, while the popular trade talks at Good Beer Week and sessions at BrewCon shows breweries have a hunger to better understand branding, Jessie believes there’s still work to be done.

“I think a lot of brewers understand that having a strong brand is important but they don’t necessary understand what’s involved in that,” Jessie says. “That’s why we do a lot of strategy work to try and discover what’s really driving them; rather than what aesthetic sheen we want to put on or follow what kind of trend is going on at the moment.”

Jessie says for craft breweries, in particular, there's a need to know how to tell your story so drinkers have the chance to understand who you are and feel a connection to the pint in your hand; having a good and authentic story is crucial in standing out from the crowd, building loyalty and giving drinkers a reason to spend more on your product than they would on a big brand beer.

“From you sales reps to your brewers, they’ve all got to be behind the brand and what it stands for,” Jessie says.

“I think people do have really good bullshit detectors; especially people who like craft beer. If you’re not a genuine brand, people can smell it and, if you want to be genuine, you can’t just be copying someone else; you’ve got to be you.”

Jessie adds that, while an increasingly crowded landscape can make it harder to cut through to the drinker, it also offers breweries the chance to really look at who they are and nail how they talk about themselves.

“Ten years ago, the part about you being unique was that you were making these different tasting beers but now everyone is making these beers,” she says. “So, now, part of you being unique is about who you are: what you stand for, what your values are, what your vision is, how you want people do feel when they are drinking you beer, interacting with your brand, or at your brewpub.”

Without giving people a chance to understand your brewery and who you are, she says, you can’t expect your beer to sell sell, whether it’s in your own venue, a bottleshop or at a beer festival.

“Everybody’s story is unique if you actually dig down and ask the right questions,” Jessie says.

“I think you need to narrow down into your niche as much as you possibly can. With the market how it is at the moment, doing blanket appeals to all beer drinkers isn’t going to cut it.”

You can take a look at some of Jessie's work – or get in contact with her and her team – by heading to the recently-relaunched Craft Instinct website and checking out their new video.

You can view other entries in The Collaborators series here.

Articles by Will
collaborators branding design 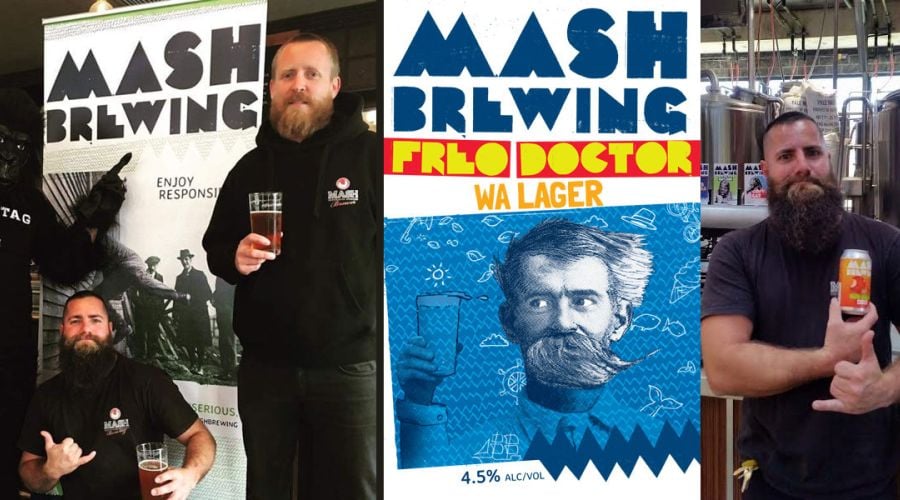