It seems like only a few minutes ago that Ballistic Beer opened their second venue, the Alehouse & Kitchen in Brisbane’s West End. But the rapidly expanding brewery has just announced the imminent arrival of their third venue: a brewery, bar and kitchen in the suburb of Springfield Central in Brisbane’s west.

With a target opening date of late October 2019, Ballistic’s new venue will be a 350 seat brewpub, with function spaces, a beer garden, and live acoustic music. The Ballistic team will be refitting the former Springfield Central Tavern, transforming it from a mainstream pub to something more akin to their Salisbury brewery bar.

David Kitchen, founder and CEO of Ballistic Beer, says: “We want to take it away from what it was [the tavern] as best as we can. They had all the standard beers on tap, 20 or 30 TVs scattered around the venues, disco ball, flashy lights… probably everything I don’t like in a big box pub.

“We’ll be putting in more intimate spaces, we’ll be big on quality food, and will put quite a lot of focus on getting people outside as much as possible. We’re even putting in big foldback doors, bringing the outdoors in more.”

An 800L Tiantai brewhouse will be used for R&D and to brew one-off beers for all three Ballistic sites.

“We’re a bit excited about this – it gives us more opportunity," David says. "At the moment our 200 litre pilot brewery only gives us four kegs, so we either hog them all at Salisbury, or if we share the love it doesn’t go very far. Now we can send a brewer out to Springfield every week to make interesting beers that we can share across our venues.”

A large kitchen and full bar will ensure the Springfield venue has a well-rounded hospitality offering. But, for beer lovers, the centrepiece will be the 18 tap beer system, pouring a spread of styles from Ballistic and also showcasing beers from other breweries.

“We’re in a better position with 18 taps to have a couple of guest taps – we can’t do that at Salisbury, and we’re limited in West End, so this one will give us more flexibility in what we have on.”

As with the original brewery bar and the West End Alehouse, the goal with the new venue is to be more than a food and drink venue, to be a community hub too.

“The focus for us is to make places the community wants to meet at and be part of," David says. "Salisbury has always had that, and we’re starting to get there with West End.

"In Springfield, there are some hospitality places, but not many, and most of those are large commercial chains. I’m hoping people will appreciate the brewpub as something a bit different.

“We want to make it open – there’s a very large piece of grass out the front, a space where families can come together and have a nice time, as we’ve done with Salisbury. We’ll have a musician there quietly performing. A place where people can sit and talk and meet.”

Ballistic Beer was founded in 2016, opened their production brewery and taproom in Salisbury in 2017, and opened the Ballistic Alehouse & Kitchen in West End in 2018. On the wholesale front, the company supplies bars, restaurants and bottleshops across Australia.

The intense growth in the craft beer market in South East Queensland has included not only an increase in independent breweries, but also in multinational companies entering the craft beer segment. David says Ballistic’s opening of hospitality venues is a way to generate, maintain, and grow its own market.

“Tap points are going to be increasingly difficult to manage, with Asahi and CUB, and if and when BrewDog gets operating," he says. "For us, our insurance to maintain demand for our product is to make sure we have our own tap handles that we can control. By doing that, we can continue to get our beer out there, continue to grow.

“There is a market there, but the easy wins are gone.”

He adds that the opening of new venues won't take away any focus from the beer.

“We’ve got to work hard to show that we’re worth having… you can’t can’t just put it out and hope that people will buy it because it’s a new beer. Lachlan’s brewing consistently excellent, consistently drinkable beer.

“We’re pushing the boundaries with the Sleep When You’re Dead range, and we’re talking about freshness of beer and how much better beer is as a result of that. We’ve got the Single Hop range, the rotating Twang range… all things to keep us in people’s minds and showcase the skills of our brewers.”

The new Springfield venue is the catalyst for a new beer, the Springfield Pilsner, which Ballistic is releasing in both keg and can.

“I’m actually quite chuffed with this one,” says David. “I’m not a pilsner guy regularly, but I’m quite happy sitting down and drinking three or four of these. A really nice German style pilsner – really clean, really drinkable.”

Between Ballistic’s steady growth and their transparent expansion strategy, it’s apparent that punters can expect to see more Ballistic venues in the future.

“We’ll be on the hunt for another one after this, once we’ve got this bedded down,” says David. “But slowly, slowly.” 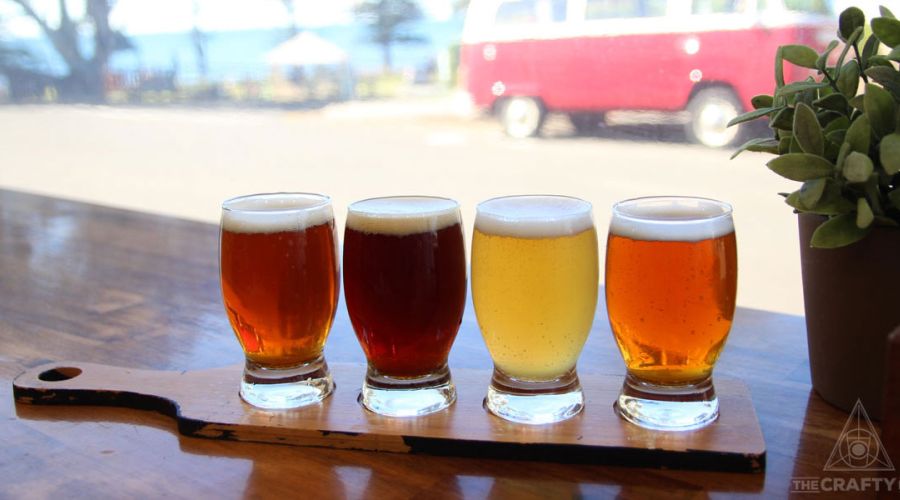