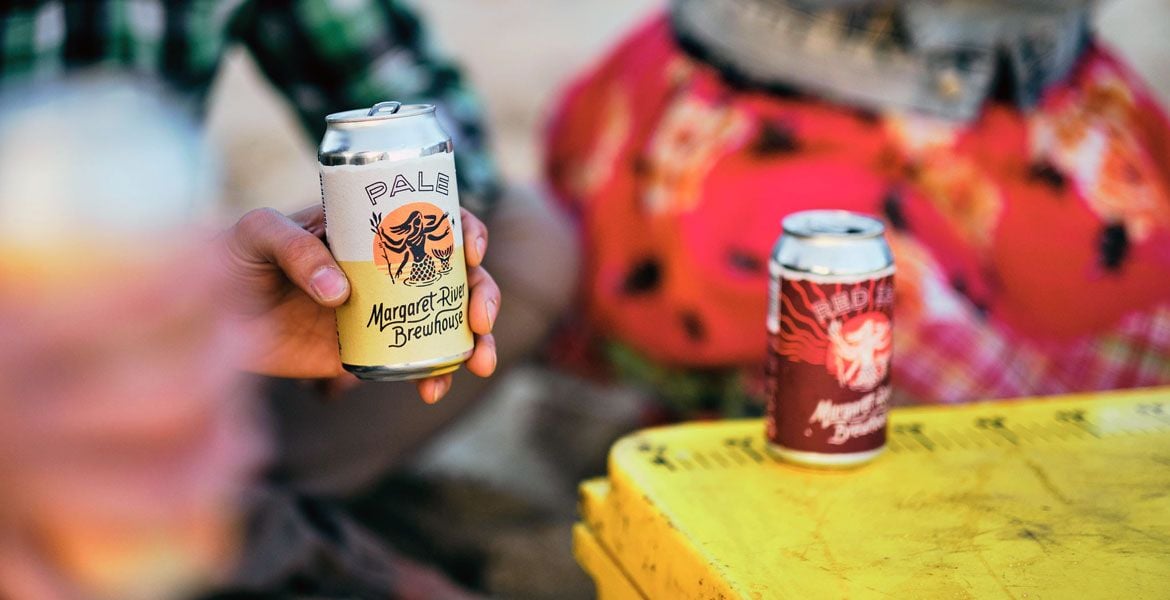 Conveniently located at the beginning of Margaret River’s main drag and plonked among the region's circumambient tall trees and bike trails, locals and tourists alike are fond of raving about the family-friendly brewery's warm welcome, beach shack vibe and accessible food and beer offerings.

Your chances of finding a take-home tipple from the brewery outside of the venue were, on the other hand, rather slimmer. They might send the odd keg of their frequently award-winning beers further afield but little liquid made its way into pack and less still left the brewery unless you'd paid for it over the bar.

This was intentional, of course, with the founding trio of families keen to look after their home region first and foremost after launching in 2016. The idea was to focus wholeheartedly on perfecting their venue and refining their beers before moving onto bigger things.

As 2019 draws to a close, those bigger things are coming to fruition, with an expansive rebrand and a revised core range heralding a move to push their newly-canned beers into the WA market.

It's a big shift for the brewery as co-owner Illiya Hastings explains: "The rebrand has been a natural progression for us. We realised we were starting to grow up – a little – and we needed a brand that we could put to the big wide world."

The rebrand was left in the capable hands of Jarrod Fuller at Zendoke, who we've featured on this site before and whose work adorns cans from the likes of Wilson, Boston and Nail. He was set the unenviable task of refreshing the brand entirely while retaining its original message of family, community and connection to Margaret River.

"The original six-armed mermaid symbolised the three families that created the brewery," Jarrod says. "It was a nice idea, so we evolved her and aligned the brand imagery with the local environment.

"We wanted to capture 'raw, natural and simplicity' to create a brand that reflected the laid-back atmosphere of the venue."

The revised core range started appearing in liquor stores in recent weeks. It includes a red IPA, pale ale, Kolsch and a ginger beer that's named after the famous six-armed mermaid adorning the entrance of the brewery, Megsy), brewed according to tried and tested recipes from head brewer Ryan Ashworth.

Limited and one-off brews will still be available at the brewery, which is undergoing a minor facelift as well.

"There will be a few changes around the venue but that won’t change our dedication to providing every punter who walks through our door with a genuine hospitality experience," Iliya says, who adds that the rebrand was always a matter of when, not if – part of the brewery's natural growth and their desire to enter the packaged beer market.

"[It] allows us to take our beers and vibe beyond Margaret River," he says. "That has meant a lot of work, but it’s pretty exciting."

Photos supplied by the brewery. Dozens of international breweries send their beers to Australia, but there's only one we know of using yeast harvested at 70,000 feet and a roving coolship. Will Ziebell chatted to the man behind Lanikai's Hawaiian beers to find out more. read on