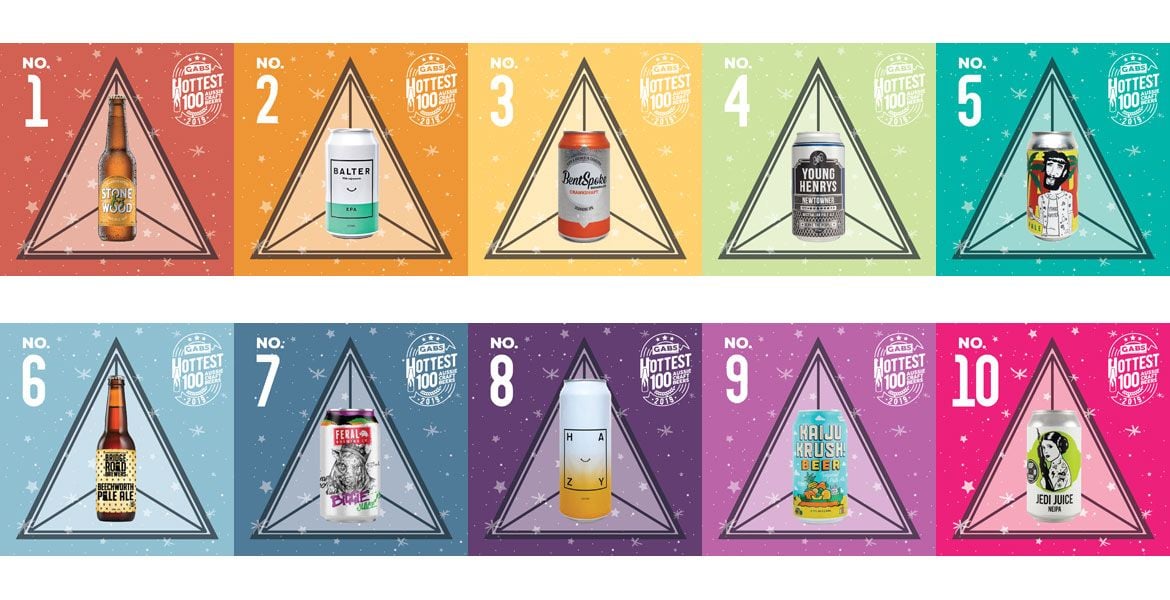 The 2019 countdown of the Hottest 100 Aussie Craft Beers was the twelfth such poll but the first since it moved – with the GABS festival – to new owners. Late last year, founders Steve Jeffares and Guy Greenstone sold to a team led by entrepreneur Mike Bray, who took two of the key players in the GABS operation with him: Ruta Marcinkus and Craig Williams.

Mike says the countdown, which saw Stone & Wood Pacific Ale return to the top spot – the campaigning by breweries, and the day itself were everything he expected and more, particularly given how the quality of craft beer in the country makes voting for just five beers so hard.

“Not only are we lucky enough to have such a wonderful choice of world-class craft beers in Australia which makes selecting your top five in the GABS Hottest 100 near impossible," he says, "but to have a record year of over 35,500 people, from all over the country, take the time out of their day to vote just shows how strong the growth of craft beer is and what a great conversation starter the GABS Hottest 100 is for the whole industry.”

Mike adds that while more people than ever voted in this year’s GABS – and that the poll is arguably the biggest act of beer democracy in the world – the space between beers remains tight.

“I was surprised at just how close the voting is, you can literally have just a few hundred votes separating up to twenty nominations all over the list.”

For Craig, who's been with GABS since 2016, he says the poll has been running for so long that, while each year new breweries make the list and beers rise and fall over time, he’s unsure anything would surprise the team anymore.

“Certainly every year, we'll see new breweries really harness the power of their audience to make the leap into the Hottest 100,” he says, adding how impressive it is to see beers like Pacific Ale Beechworth Pale Ale remain favourites for so long.

“To me, it's about whether that success can be sustained year to year. It's the beers that consistently make the upper echelons of the list that amaze and impress me, and to even make it into the list for two or three years running is something that any brewery should be very proud of.”

This year’s list has also seen the disappearance of small breweries that made a splash last year, such as Darwin’s One Mile and The Welder’s Dog in Armidale. Craig says strong campaigns can push beers into the list even without national distribution, yet believes the top end tens to reflect the beers people are thinking about, and drinking, all year.

“I think there are two factors at play here, one is campaign driven 'reminder voting' and the other is 'no-need-to-remind-me-that-this-is-my-favourite-beer voting',” he says.

“The top beers that are there every year are capturing more votes because they are naturally top of mind when people think of their five favourite craft beers, not because they saw an ad. To get into that 'top-of-mind' position, that always comes back to the basics – brewing high-quality beer consistently all year, and building your brand and community over the longer term.

Mike says that, while the bigger breweries with flagship beers might find success, beer fans know what they like and vote accordingly.

“I think we need to give the tens of thousands of craft beers lovers that do vote far more credit,” he says. “They will vote for the beers they enjoy which may be mainstream or a local brew only found in their hometown.

“This is reflected in the sheer number of beers that actually receive votes, nearly every beer in the poll had a fan out there. While the top end of the main list could be considered heavy in beers from the bigger breweries and indie flagships, this is probably directly reflective of the distribution reach and year-round focus these beers receive, which will make them far more accessible.”

Even if some beers at the top might not excite drinkers at the pointier end of the craft beer world, Mike says the more seasoned or adventurous beer fan is partially responsible for the thirty new beers in the top 100 and can always look to the Hottest 100 New Beers 2019 list for more diversity. Due to the sheer number of breweries in the country, Mike adds that marketing and connecting with drinkers should always be high on the agenda for a brewery.

“It is one of the best annual opportunities for all brewers to become part of a national conversation with the spotlight solely on craft beer,” he says. “This doesn’t mean you have to have a big budget to create content, this year social channels were full of fun and creative posts and videos that were created on mobile phones and got great cut through.”