Tasmania's brewing scene is a busy old place these days so it seems only fitting the state would birth more than one beer podcast.

Chris Lukianenko started The Beer Healer as a blog but soon moved into videos and podcasts about beer and the culture that surrounds it. In the second half of 2018, Step Brewers joined in: three locals keen to shine a light on their home state's brewing industry and the wider world of good beer too.

Behind the podcast is Ali Davis, Ian Merrigan and Klimt Donohoe. Given the last of the Steppies is a professional brewer (and co-owner of Spotty Dog Brewing), you might expect long, drawn out conversation about malt profiles and hopping rates. But what you'll find is a banter. Lot's of it.

Sure, each of the hosts is keen to dive deep into the brewing process – or coffee roasting in Ian's case – but you'll also find lengthy chats about movies, pop culture and where they think the beer industry and the community that surrounds good beer is heading.

Ahead of Brewsvegas 2020, they've even provided their expert knowledge of all things Tasmania to help Tippler's Tap in the Fortitude Valley showcase the state's beers as part of Pint of Origin. On March 15, they're hosting a live podcast at Tippler's Tap too and, ahead of that, we caught up with the team to find out more.

Who are the voices behind your podcast?

Klimt “Papa Sweden” Donohoe is owner of gypsy brewing operation Spotty Dog Brewers, based in Tasmania. He brings a deep fascination with beer and beer culture as well as a home and commercial brewer's lens onto the show.

Ali “The Juice Wolf” Davis is a professional photographer, cat lover, homebrewer and full-time Juice Wolf, feasting on all the hype haze cans that he can get his hands on. He is in charge of all our photography and videography, design and recording.

Ian “Cap’n Ahab” Merrigan is a barista with a super keen palate for flavours, beer and his old passion, coffee. He brings a critical eye, desire to get in deep discussions on origin and locality as well as a case of extreme grumpiness if recording goes late or no snacks are provided.

What’s the story behind the name?

Obviously puns are amazing, but it comes from the Will Ferrell/John C Reilly movie Step Brothers, in particular the scene where the brothers realise they have heaps in common: “Did we just become best friends?”

That pretty much sums up how we came up with the idea to do a beer podcast!

How would you describe the style of your show?

We’ve evolved over time for sure, with our earlier episodes not really any representation of what we do today!

Our show revolves around segments that are essentially commentary on craft beer culture, news and interactive for our audiences. We do a regular Sip, Skip or Cellar segment, where the hosts argue over whether they would try, skip or stock up on new beer releases. We also run segments where we ask deeper industry questions, do long format beer reviews, play games around true or false ridiculous hype beer releases from around the world and pepper those episodes with central topics or interviews.

Our podcast has a fair bit of banter and in jokes that build for our audience over multiple episodes as well as what we hope is a different take on a beer podcast in Australia that brewers, beer fans and industry people can enjoy.

That’s a great question.  Ali and Ian wanted a foot into the beer world and Klimt stupidly agreed. Now that it’s going none of us can imagine not doing the show.

We provide a real mix.  We aren’t in this to catch people out or call them out for a headline, but at the same time we do feel comfortable with asking any questions we think will add to our listeners experience.  We won’t ever shy away from criticism of a brand or product if it’s warranted but also do a lot of that with tongue in cheek.

Having a mix of a brewing company owner, keen palates and a very good eye for quality marketing and photography gives us some authority on what kind of questions we feel comfortable to ask, but also we are here to let people tell their stories.

Up until this year we haven’t focused on guests as much as we wanted to build our audience organically and set up who we were and what we do first. Now that we are starting to have guests on the show it’s pretty easy for us to select. We aim to get guests on that are interesting, have something to give beer culture and are pushing the craft forward. But it also helps if they are fun and engaging too.

We don’t want to tell the same stories that everyone is telling, how you got into brewing, etc. We think there are some great groups already doing that. For us to feel like we are doing our best, we want to bring something new and interesting to the table.

DOES MUCH PREPARATION TAKE PLACE OR IS IT A CASE OF PRESS RECORD AND LET'S SEE WHAT HAPPENS?

Actually a massive amount of prep goes into episodes, depending on topic. Without giving away too much information, we have a set run sheet format, as well as lists for our regular segments like Sip, Skip or Cellar etc.

Most episodes will also be accompanied by a social media plan, which incorporates images and/or videos to release as well as what topics we will post in beer groups on Facebook leading up to an episode release.

WHAT'S THE BEST QUESTION YOU'VE EVER ASKED A GUEST?

Questions in our live shows. Doing our show live, given the interactive segments we have and the way we run the show has been an absolute thrill.

Having brewers and audience members holding up a sea of Sip, Skip or Cellar placards for our most popular segment, or having a panel of three brewers and a full audience trying to guess which “Hype” beer was false from a list of three ridiculously adjunct heavy Instagram release captions including one made up by us was a smiling ear-to-ear moment.

AND THE BEST ANSWER ANYONE HAS EVER GIVEN?

Not the best answer, but watching Ali “The Juice Wolf” Davis brimming with smiles after we awarded Justin from Deeds Brewing with Brewery of the Year on our recent show, The Steppie Awards, was pretty special.

He was chuffed to receive it, gave up heaps of his time to drop us hot beer release scoops and, following the interview, Ali declared that Justin and him would be best friends forever.

AND WHO WOULD BE YOUR DREAM GUEST?

The next one. While we’ve only just started delving into having guests on, every interview just is an awesome opportunity to engage with the people and the stories behind the product we love so much.

DO YOU DRINK WHILE RECORDING; IF SO, WHAT'S THE IDEAL BEER TO HAVE WHILE IN ACTION?

We drink while recording based on the episode content. When we set out a run sheet we will have listed a Top of the Show beer and then content beer so we are always drinking something relevant to the topic and review those beers as we record.

If we’ve got a guest on we will try and get something that’s rare or exclusive that’s in their style of brewing to share with them, or drink something from their own catalogue.

FOR THOSE OF A TECHNICAL BENT, WHAT IS YOUR TECHNICAL SETUP? HAS IT EVOLVED OVER TIME?

Through our Patreon supporters we’ve been lucky enough to be able to upgrade our setup. With their help, we’ve gone from a singular microphone in the middle of a table to a full setup with individual mics, headphones and mixing desk. This allows us to run show segment jingles and stabs as we record but also allows us to call people and record them to their own channel on the board.

It also gives us a lot more flexibility in taking the show on the road for live podcasts!

WHERE CAN PEOPLE FIND YOUR PODCAST?

We are available on all major streaming services as Step Brewers Podcast and feature a huge amount of quality content on our Instagram and Facebook, along with our exclusive extra content only on Patreon.

If you're in Brisbane during Brewsvegas, the Step Brewers are holding a live show at Tippler's Tap in Fortitude Valley with some of their Tassie brewing mates (and others too).

You can read other entries in the Podcast People series here.

Articles by Will
podcast people 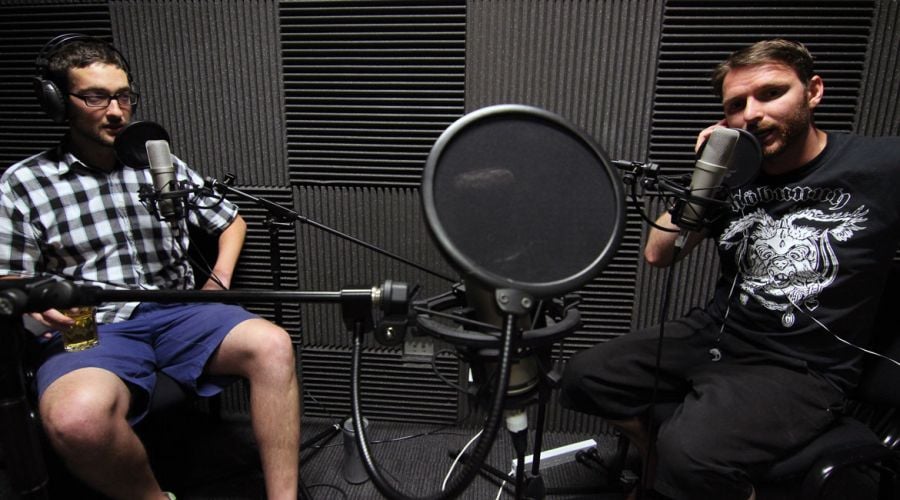