Head back to 2004, travel down to the Margaret River region in Western Australia and, in the heart of wine country, you may well have found yourself stopping into the freshly opened Colonial Brewing Co.

In the decade and a half that’s followed, plenty has changed. The wine region has increasingly tilted towards being just as much a beer region each year, while Colonial now brews out of both Margs and Port Melbourne and the wider Colonial Leisure Group operates venues across the country.

The Port Melbourne location on Bertie Street that was once the home of Matilda Bay has become the main source of Colonial beer, too, with the sort of scale that's enabled them to send cans to most parts of the country. Continued growth had seen that brewery start to max out, leading to a major upgrade in 2019 that gives Colonial the capacity to nudge beyond seven million litres of beer brewed annually before needing to step up again.

Overseeing the expansion, and all things beer since 2017, is Ash Hazell. Like the last person featured in our Brew & A series, Ash got his start at Little Creatures in Fremantle, but many in Melbourne’s beer world would first have met him as the man creating beers for Barrow Boys. The gypsy operation ceased to operate after Ash moved to Colonial to take up a role that sees him regularly flying between Melbourne and his native Western Australia, squeezing in as much fishing along the way as he can (if you think his beers are good, you should check out what he can do in a kayak).

Ash’s time at Colonial hasn’t just seen the volume of beer grow but the lineup up diversify too. South West Sour may not be the first sour made available year round but the peach-pink tins are comfortably among the most widely available. At the start of the month it was joined by the potently cucumber-heavy Market Sour Juniper, Lime and Cucumber, the first release in a new series exploring seasonal produce.

Aside from those, anyone who has popped into either brewery will know to expect a regular string of limited releases alongside the tight core range. With more tank space to play with we can expect to see a little more from Ash and the team too – especially given the current venue shutdown.

“We like to have a few keg releases out here and there and we can’t do that so we’re looking at what we can get out in cans,” he says.

The closure of pubs and venues is one felt by breweries of all sizes and, with the brewery sharing ownership with the Colonial Leisure Group, Ash says it has hit hard.

“We’ve obviously lost all of our keg sales,” he says. “We operate separately but we’re still the same company and they’re all shut down so there are a lot of costs there.”

So, as we wait to come out on the other side, here’s Ash to chat Rodenbach, Firestone Walker and Tool as part of our long-running Brew & A series.

I started homebrewing when I was 17 because it was easier than faking an ID to buy beer. From there the passion took hold and I never looked back.

What what was your epiphany beer?

Little Creatures Pale Ale. At that time I was homebrewing and brewing flavourless beer but as soon as the first Pale Ale hit my lips, I knew standard "beer" would not be the same to me again.

In my final year of university (Studying Chem & Biochem), I convinced the head brewer of Little Creatures at the time (Simon Bretherton) to co-supervise my final year research project. This connection landed me my first brewing job – cleaning kegs!

It’d have to be the beer we brewed at Colonial with an experimental hop [HPA-016].

The beer was called Pioneer and it was a 7.5 percent IPA using a foolish amount of whole hops both in the hopback and then dry-hopping. Although it was "just an IPA", the full spectrum of hop character we extracted through that hopping regime was unreal. The low bitterness worked with the light polyphenol notes from the stem material not normally present in processed hops, and there was no loss of aromatic oils.

Water. It’s so crucial to getting beer right. If it’s the wrong temperature, pH, hardness, etc it doesn’t matter what else you do, you’re not in control of your brewing process.

Our Good Beer Week collaboration with Firestone Walker last year. Still enjoyable but I’m not sure the world really needed it. We used two types of kveik yeast – Hornindal and Voss – fermented up to 36 degrees which created tropical juice and spicy notes before we even hopped it fully.

It was then dry-hopped excessively with Cashmere. The result was like the juice left behind from canned fruits. Delicious in theory, but extremely intense and unbalanced.

Rodenbach without a doubt. They brew one of my favourite beers and I’d love to learn more about the process and how they manage the farm of foeders.

I love seeing someone do new things, so little brewers like Molly Rose and Wildflower who have a unique brewing model always get my attention, as do the big guys like Stone and Wood that pump out quality beer time after time and you always know you’re going to get exactly what you order.

Jever Pilsner. So clean, bitter and refreshing. I’d never get bored of it.

It can be really bad for your liver so look after yourself and stay hydrated.

Articles by Will
brew & a colonial 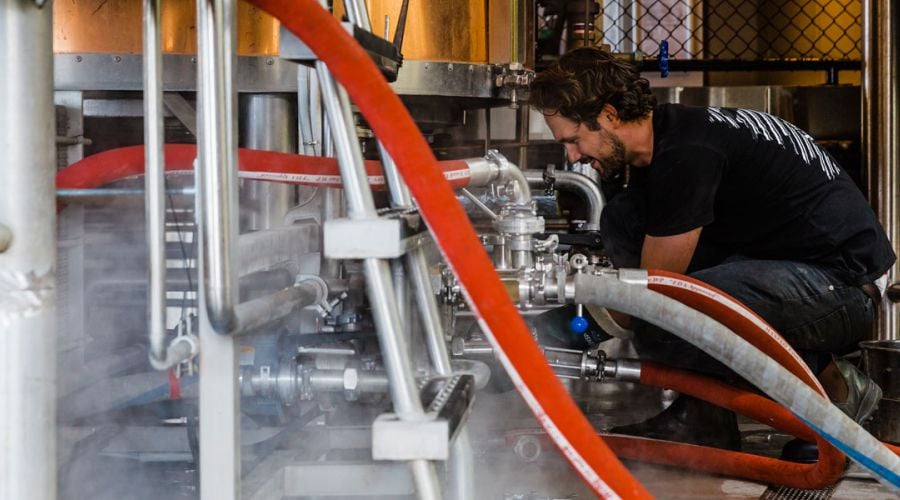