Following weeks of speculation and uncertainty, on Monday, March 23, licensed venues and dine-in food businesses throughout Australia were forced to close indefinitely due to the rising threat posed by the COVID-19 pandemic. In an instant, the Australian beer industry and the wider ecosystem of which it's a part was thrown into chaos.

For Topher Boehm and his small but passionate group of employees at Wildflower Brewing & Blending, however, the shutdown began a little earlier than most. The hotter months that preceded the shutdown had been punctuated by unprecedented bushfires and a surprisingly bountiful fruit harvest, which meant Topher and his team had travelled extensively throughout regional NSW to source fruit for the next six to twelve months of beer releases.

Combined with the day to day running of a brewery, keeping an eye on up to 40 different fermentation projects, weekend cellar door operations and the looming spectre of a deadly epidemic, by early March Topher was exhausted.

“I had gotten super rundown and we took a couple of weeks off so everyone had a bit more time at home while, you know, we didn’t really know what was going to happen with it all,” he says.

On top of all that, Topher and co-owner Chris Allen had just signed a lease on the building next door to their Marrickville home. What this all meant was that, by the time the forced shutdowns were announced, Wildflower had already closed their cellar door and began contemplating their future. Topher, as always, was thinking ahead.

“We were pretty stoic, really. Chris and I aren’t usually thinking about tomorrow or the next day. So for us the question is, 'Do we want to still be here in five years time?' Yes? Well then, what do we need to do to make that happen?”

As a producer of wild ales with a significant expansion of floor and storage space, the immediate problem of what to do with beer that could no longer be sold through taps was decidedly less pressing than those brewers who rely on their beer being consumed fresh.

“Our beer isn’t going to go bad in keg so we are fortunate in that respect," Topher explains. "There was never the sense of urgency and rush that others may have had. We could take a deep breath and just think it through. Time is on our side.”

While initial thoughts were given to engaging a mobile canning line to package as much of their keg stock as possible, Topher and Chris soon decided it wouldn’t be fair to their customers to do anything they fundamentally couldn’t continue to do once the venue was able return to some sort of normalcy. With an online store already in place and a local customer base accustomed to cellar door takeaway, Wildflower realised they could utilise the changing conditions as an opportunity to set themselves up for the future.

“In the months of the lockdown we brewed 29 batches of beer so we essentially doubled the amount we would usually brew. Unfortunately for Batch [where Wildflower brew their wort], they were not brewing as much as they would normally. So it was good to be able to put a bit of money in over there. It probably wasn’t significant for them but maybe it helped a little.”

The doubling of the available space with the addition of the building next door hasn’t necessarily resulted in a dramatic increase in capacity. By Topher’s own estimation, the barrel count has only increased by around ten percent. Instead, what the new space has afforded the business is better management of their inventory, more room for experimentation and, most critically, a far cleaner and more efficient process.

“The real change is that we don’t have to move shit around a hundred times to get things done,” he says. “The cleanliness of our process has always been tied with quality for me. And with having a nice open and clean space we can safely wrap a pallet or move fruit into a tank.

"We could have a beer we’ve been working on for years just fuck up in an instant so having the clean space gives us the clarity to see what we’re doing.”

Walking through Wildflower's operations, Topher’s enthusiasm for brewing and fermentation is palpable. His eyes light up as he motions to two tanks; both contain saison wort, with one also holding second-use peach skins and the other third-use cherries.

“We’re getting so much length out of these fruits. We never would have had the room to try this before," he explains. "These cherries were picked in early February and they’re still giving. We used them to make St Thomas then we racked some table beer onto them and now we’ve put saison wort onto them and I guarantee that wort will be red.”

Although an ever-expanding roster of one-off experimental wild ales is a tantalising prospect, many of these beers may never receive their own release. As is inevitable with experimentation, some will never pan out, however several will end up being blended into other releases to add layers of complexity.

Thanks to the easing of social distancing restrictions, Wildflower were able to reopen their cellar door to the public in June. However, the subsequent shutdown in Victoria, with Melburnians now living under a curfew, and consternation over further restrictions in New South Wales have once again cast a pall over the hospitality industry.

The climate is disheartening and people everywhere have a right to feel anxious about the ongoing effects to businesses and the people that work in them. Topher, for his part, is trying to remain positive.

“In some ways [the current situation] has given Chris and I the confidence to say that if we don’t fuck it up, we can still be here in ten years. Like, what’s the worst that could happen? A global pandemic? It’s happened, it’s still happening and we’re still here.” 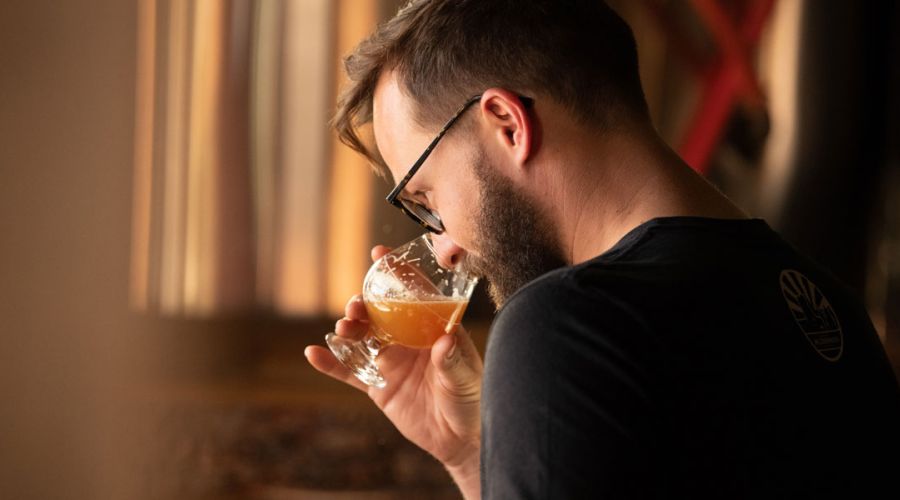