Craft beer's spread through cities typically starts in the inner suburbs before moving further out. For Melbourne's Hopheads, however, the story has been quite the opposite. Indeed, head back far enough and you could argue it really started to take shape in Kuala Lumpur, but we'll get to that later.

The first of Hopheads' craft beer-centric bottleshop-and-bar combos was launched in 2015 by Adrian Chong and Wai Lee Yong in Point Cook. Back then, the fast-growing suburb on Melbourne’s western fringe might have seemed an unusual spot in which to find the vast range of beers showcased on their taps and shelves, but their goal was to open a place where they could enjoy better beer close to home. And, while it took some time, their community embraced that vision too.

In 2018, they moved a little closer to the city when they launched a second store in Altona. And, from tomorrow, there will be a third Hopheads operating in Melbourne’s west when they open up in Yarraville – a suburb they’ve long been eyeing up.

“Opening a beer shop in Point Cook isn’t the best idea in the world and Altona is only a little bit better,” Adrian says.

“In terms of space, [Yarraville is] where we should be.”

The Crafty Pint has written about the rise of craft beer in Melbourne’s west before yet, despite Yarraville being one of the west’s trendier neighbourhoods – declared one of the coolest neighbourhoods in the world by Time Out last year, no less – craft beer hasn’t yet flourished there. With new businesses opening and an air of change, the Hopheads team felt it was finally time to train their focus on a suburb that's already home to a plethora of cafés, fine diners and one of Australia’s most beautiful cinemas, the Sun Theatre.

“It’s undergone a massive change in the last few years,” Adrian says. “We do feel Yarraville is ripe for this kind of thing and that people are looking for something like us in that area.”

Whether or not Yarraville residents are ripe for conversion to craftier drinking habits, the Hopheads crew is skilled when it comes to enticing newcomers to the fold. Before opening Hopheads, Adrian and his family launched the Taps Beer Bars in Kuala Lumpur, which helped stir Malaysia’s craft beer scene into life. In Point Cook, their locals have gone from treating the store as a novelty to knowing as much about beer as those behind the counter.

“Most people there didn’t know about beer at all and now they’re way bigger snobs than any of us,” Adrian says. “And that’s cool, that’s the snobbery that we inculcated in our customers, and we think that’s great for the industry."

Wai Lee says their original home has gone beyond serving their immediate locals too, with the magnetic appeal of the Hopheads offering luring those from surrounding suburbs.

The team has grown significantly since its earliest days too, with Ryan Cochrane – who worked at The Park in Werribee when it was leading craft beer’s rise in Melbourne’s outer west – coming on as a business partner for Altona, and longtime Melbourne sales rep Lachy Barter also joining the crew.

Ryan says that in Altona, like Point Cook, converting people to the charms of their diverse offering can take time, but they know how to help people discover a love for better beer.

“People weren’t kicking the door down for the newest release or anything,” he says. “You get them on that train and now they are kicking down that door and looking for anything and everything that’s available. It just takes time."

Despite sharing the Hopheads masthead, Ryan says they still treat each store differently, with each having its own vibe, and they’ve worked hard to convince locals that amid the hundreds of beers on their shelves one will be perfect for them.

Adrian says they’ve changed their approach too: “We have become a lot more accessible. When I started out, I was fixated on making the beers [at Point Cook] as nerdy as possible."

As for craft beer's rise from the fringes to a significant sector of the beer market, he says: “I think it’s a really massive collective effort from the whole beer industry – the fact that it’s pretty together for the most part and everyone is pulling in the same direction.

“All those little things all help. Ten years ago, it was the same five dudes going to every single beer thing and I was probably one of those guys.

“It is still an uphill struggle. For a venue as focused as we are, it’s always going to be more difficult than just for something like a pub.”

As for what’s next, with Yarraville finally opening following delays partly related to COVID, they have no plans to slow down.

“We’re not going to stop at three; we are always looking and we have plans in place," Adrian says.

The future of Hopheads may well take them beyond Melbourne's west, but as an operation dedicated to attracting newcomers to craft beer there are places you're unlikely to find them.

“What we don’t like doing is going somewhere that’s saturated," Adrian says. "We’re not going into Smith Street or Fitzroy.”

Hopheads Yarraville's will be welcoming people inside from 1pm on March 26 and can be found at 53 Anderson Street, Yarraville. You can find it and hundreds of other good beer businesses in the free Crafty Pint app. 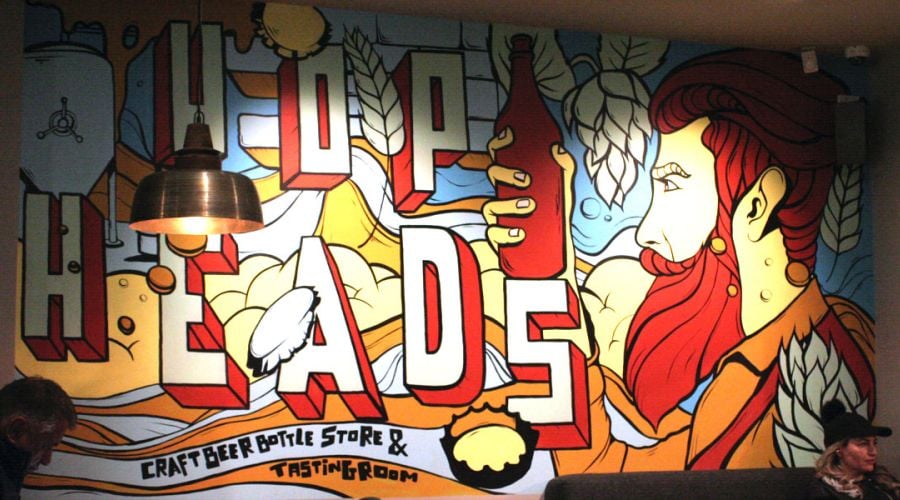