The last kegs have finally rolled out of West End’s Thebarton brewery, and the once mighty red tins will no longer be produced in South Australia. But, just as production was ceasing in mid-June, a new “hyperlocal” operation was preparing to launch their own draught brewed a few hundred metres away on the northwest corner of Adelaide’s parklands.

Bowden Brewing first began as an idea more than eight years ago, when co-head brewer Alex Marschall and several mates were thinking about ways to bring the growing craft beer scene from the East Coast to Adelaide.

“We started looking up how we could open a brewery and quickly realised we didn’t have the funds or the knowledge,” he says. “So we did the next best thing, which was opening a craft beer bar.”

That bar was NOLA, and Alex says it was always meant to be a stepping stone towards opening a brewery.

He’s since spent the past five years honing his craft with the Western Ridge Brewing Collective and, in a sign of how much the industry has changed in that time, two of the 14 taps at Bowden Brewing will be dedicated to non-beer alternatives.

“We're going to open with a kombucha and a seltzer,” Alex says, explaining that he's used passionfruit from his backyard for the first batch of kombucha. The “as local as possible” ethos extends to other suppliers as well – among the initial beers on tap are a breakfast stout and coffee porter using beans from two nearby roasteries.

Not that visitors are likely to see many ingredients lying around. Bowden Brewing shares a light- and plant-filled sawtooth building with several other businesses, and their section includes a 200-person bar plus a Mexican and Central American restaurant. That means floor space is at a premium.

“At the end of each brew day we take anything excess back to a storage facility,” Alex says, with tired smile that suggests he’s been putting in some serious hours in advance of the opening.

“It adds a little bit more to each day but it means we can fit more people in the bar.”

Soon he’ll also bring in a removable benchtop canning machine to supply a takeaway fridge and the adjoining bottleshop.

With careful planning, Alex and his co-head brewer Jake Phoenix (on the right with Alex above) managed to fit the entire kit, from Bespoke Brewing Solutions in China, into less than 50 square metres. That meant expanding vertically and the four fermenters have 600 litre bright tanks stacked above them, each with a glycol snake connecting it directly to one of the 14 taps.

“We’ve been going pretty much full pace for the last two months so that we can open with a full tap list,” Alex says.

The brewers met when they were working together as engineers, with Alex still brewing in his old work jumpsuit. The friends quit their positions earlier this year to work in the brewery full-time but, as things settle down, the hope is that two or three brews a week will be enough to maintain the core range – a session ale, IPA, seasonal sour and the flagship Bowden Draught – while still bringing out something new weekly.

Any overflow from the onsite bar will be kegged and sent around other Big Easy group venues like NOLA and Anchovy Bandit, while two 120 litre fermenters ensure there’ll always be some exclusive brews available at the taphouse. The first two beers in this category are a huge 9.3 percent ABV single hop Cascadian IIPA and the aforementioned breakfast stout with smoked malt, while a Red Rye IPA and ESB are listed on the board as “coming soon”.

Alex suggests a taco four pack featuring a corn lager, coriander gose and smoked porter to complement the restaurant as a future possibility.

Like just about all of their plans, that will depend on buy-in from locals in Bowden, and Alex is adamant he wants to develop a two-way relationship with nearby residents.

“We’re going to keep refining everything including the core range based on the feedback from customers,” he says. “A lot of what we're making, we're brewing for the Bowden community, so if they want Bowden Draught to have more caramel flavour or a deeper yeast flavour or you want it cleaner, they just need to let us know.”

Bowden Brewing opens to the public on July 6. You can visit them at 5 Third Street, Bowden, and you'll find them in the free Crafty Pint app alongside hundreds of other breweries and good beer venues. 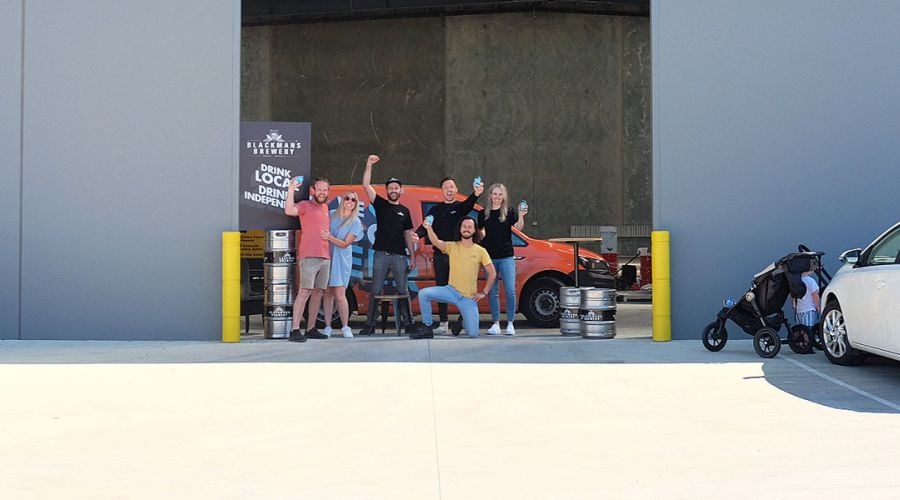