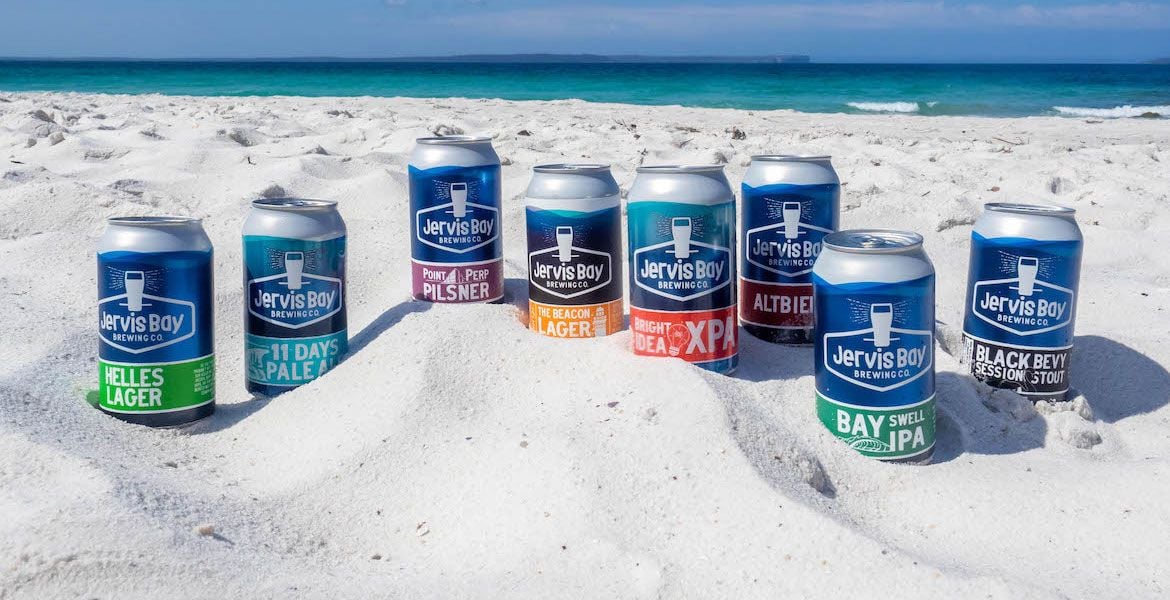 The latest COVID outbreak might be causing havoc throughout the state, but many New South Wales breweries are reaping the benefits of state government support.

More recently, the NSW Government has highlighted various fee waivers and the promotion of food, wine and ale trails in partnership with Destination NSW and other organisations as ways in which they are supporting the state’s $600 million independent brewing industry, two-thirds of which are located in the regions. And, just this week, Jervis Bay Brewing have announced they’ve secured $600,000 from the NSW Regional Job Creation Fund.

The investment will help the South Coast operation with the construction of a new brewery across the road from their existing taproom, which will in turn allow them to focus on wholesale production for national and international markets.

They’ll also be taking the opportunity to make their brewing more sustainable, including a world-first commercial trial of switcH2’s breakthrough technology. This aims to turn brewery wastewater into hydrogen, a project we wrote about in our Going Green series in March 2020.

Brewery director of business development Christian Wood said in a media release that the news follows a “tumultuous 18 months” since they opened, during which they’ve had to deal with bushfires and the coronavirus pandemic, and believes the upcoming expansion will benefit their local suppliers, trades and customers as well as regional industries such as Riverina grain growers, malt suppliers and hop growers.

He adds: “We will also provide a facility for contract brewing so that small regional breweries can begin to increase their output, further benefiting the broader industry and supply chains.”

Jervis Bay’s director of brewing and sustainability Oisín Sweeney (above left) said: “Jervis Bay is synonymous with a beautiful, unspoilt natural environment. That’s why, before we brewed a single litre of beer, all directors identified maximising sustainability as a key goal.

“The challenge of ensuring that our new production facility is as sustainable as possible is as important as brewing great beer. The two go hand in hand for us.

“We now also have the opportunity to improve environmental outcomes by partnering with switcH2 to scale-up and trial the creation of hydrogen from our wastewater. This is unbelievably exciting and has the potential to help breweries everywhere reduce their environmental impact.”

Jervis Bay hope to be brewing beer on their new system by January 2022, with Constantine Tsounis, a co-founder of switcH2, delighted to have the opportunity to help them decarbonise their business.

“Having an industry partner who is as committed as we are to improving environmental performance provides us with the ideal platform to scale-up our technology from laboratory scale to real-world implementation," he said.

“Having a partner like Jervis Bay is also testament to the changing times in Australia, where the appetite for clean technology is accelerating astronomically.”

While grants such as this offer clearly identifiable results, there are other, less direct, measures which appear to be supporting regional breweries in NSW too, with Tumut River Brewing Company (TRBC) among those featured in one of the state’s food, wine and ale trails.

The small operation in the beautiful Riverina region is poised to expand significantly and is already part of the Valleys & Vines trail, which outlines a road trip through the Riverina. The trail is still relatively new, so its impact is yet to be seen; however, the NSW government has been investing in print media, online tourism campaigns and TV programming to boost tourism in the area some time now.

Brewery co-founder Tim Martin (pictured above at the site of their new brewery and venue) says it’s hard to measure exactly what has driven tourism growth in the region, but a combination of factors appear to be contributing.

But he says they’ve certainly witnessed an influx of visitors in the past 18 months, and to the region in general; he says people from Sydney, Canberra and the South Coast of NSW have been flocking to TRBC, including many who had never visited the area until COVID pushed them to holiday in their home state.

The result of this growth is that Tumut River, the brewery, has burst its banks. There are plans underway for new, grander premises a kilometre down the road, which Tim says will be around three and a half times larger than their current location. The new TRBC will have capacity for 400 patrons, a large kitchen, and a dedicated function room for events, as well as a spacious outdoor area enjoying views of the surrounding hills.

UPDATE: On the day we ran this article, TRBC learned they'd secured $140,000 in funding to help with the purchase of a canning line as part of the Regional Job Creation Fund.

“We’ll have a 1500 square metre outdoor beer garden, so you go out on the grass area, with trees and shade where kids can sit and play, and adults can bring their dogs or whatever they’d like to do,” Tim says.

“I’m pretty excited about that, because I think at this point we’ll be the only place in Tumut with anything like that.”

As well as renovating an existing building at the new property, they’ll also be building a larger brewery shed, with greater room for equipment, increased brewing capacity, and more refrigeration space for beer storage – in other words, plenty more beer for locals, tourists and online customers.

“I’m really optimistic about the opportunities that lay ahead for us,” Tim says. “We hope the artificial growth [from COVID] can turn into sustained growth because of the experience we offer.”

As for wider government assistance for independent breweries – as with Blasta in WA, whose million dollar grant we wrote about last month – Tim sees it as a worthwhile investment.

“For us, and any small business, if there’s extra money in the kitty you just put more money in your business,” he says.

“It’s absolutely feeding the economy. Nobody’s buying Bentleys and retiring. We’re all just reinvesting in our businesses to keep growing.”