Short Back And Sour, Please!

Short Back And Sour, Please!

There’s a certain allure in the combination of a beer and a haircut. You’ve snuck out of work, wandered down the road to your favourite barber and, while emails are still landing in your inbox, for the time being at least, you’re ignoring them.

As craft beer has spread its wings far and wide, it’s become something of a rarity – at least in bigger towns and cities – to wander in for a trim and immediately be offered a can of the flagship beer from the nearby brewery. Moreover, as our end of year wrap up for South Australia pointed out, there's an Adelaide barbershop with its own beer, courtesy of Barossa Valley Brewing, and others with kegerators installed by The Suburban Brew.

In Melbourne, brewery signage has such a common sight outside hairdressers that it can be hard at a glance to work out whether it’s a place designed for drinking or for shedding your lockdown locks. As of this weekend, at La Bodega Barbershop & Craft Beer Bar, in Williamstown, there’s no differentiating between the two.

During the day, it's operating as a barbershop just as it has over the last few years: you can walk in for a haircut and enjoy a beer while waiting. While doing so, you might like to cast your eyes over the 80 or so beers in the fridges so you can grab a mixed four-pack as you leave. Then, on Friday and Saturday nights, once the clippers and scissors are safely tucked away, the sound of hair being swept from the floor will be replaced by that of glasses clinking as La Bodega switches, speakeasy style, into a bar.

Behind the change at La Bodega are new owners Shaun Gregory and Daniel Logan: two mates whose desire to run a bar together saw them become barbershop owners too. While it wasn't their initial plan, after moving to the area a couple of years ago, Shaun started getting his hair cut at La Bodega and noticed it was up for sale.

“I messaged Daniel,” he says, “and said, ‘Hey it’s got a full liquor licence, do you want to buy a barbershop?'.”

The pair both have business backgrounds and, having worked for large companies, wanted to run something small while working in the craft beer industry they'd bonded over.

“We wanted to get into our passions,” Daniel says. “One is running a small business and being community-focused, and when Shaun moved into the area, in Newport, he discovered that community vibe in Willy.”

Given the hours are complementary, Daniel is confident they'll be able to run both sides of the business without one or other losing out.

“It doesn’t cut into trading hours for barbers,” he says. “We might cut things off a little early on a Friday but the feedback from people getting their haircut in the chair is that they’re excited.”

It might be an unlikely approach but Shaun says they see barbershop chairs and decorations as creating a speakeasy vibe akin to a those from America’s Prohibition Era. With a diverse offering in their fridges and plans to install a tap system down the line, they plan to offer a far wider range of beers than any nearby venues.

“We just want to be the go-to place for speciality craft beer in Willy," Shaun says, "so we’ll start with 60 to 80 cans and put in some taps down the track.

“The overall dream would be that you come and get your hair cut and get a free, good beer to sit down and drink, and then there’s this selection of 60 or so beers you can choose from to take home. Then we hope we’ll be the place to be on a Friday and Saturday night."

As far as Melbourne suburbs go, Williamstown’s been something of a hold out when it comes to venues with a dedication to craft beer, despite hosting a craft beer festival in the past, with the likes of Hopheads attracting an adoring audience in neighbouring suburbs, and with Footscray these days serving up a wealth of options.

After switching their complimentary beer offering from mainstream lagers to Hop Nation beers, Daniel says locals have shown they're fans of the change. And given this pocket of inner Melbourne feels more like a small town than most suburbs, he believes there are plenty of people eager to connect with local beer.

“I do feel like people here want to know where their produce is coming from,” he says. “And that includes knowing where their beer comes from and who owns it.”

The La Bodega bar opens to the public on Saturday (Feb 12) and will be open on Friday and Saturday nights every weekend from next week. You can find it and hundreds of other craft beer venues in the free Crafty Pint app. It's taken rather longer than planned to get here and is a different beast to that originally envisaged by the founders, but ambitious Perth venue Besk is finally open. Guy Southern caught up with the team to find out more. read on 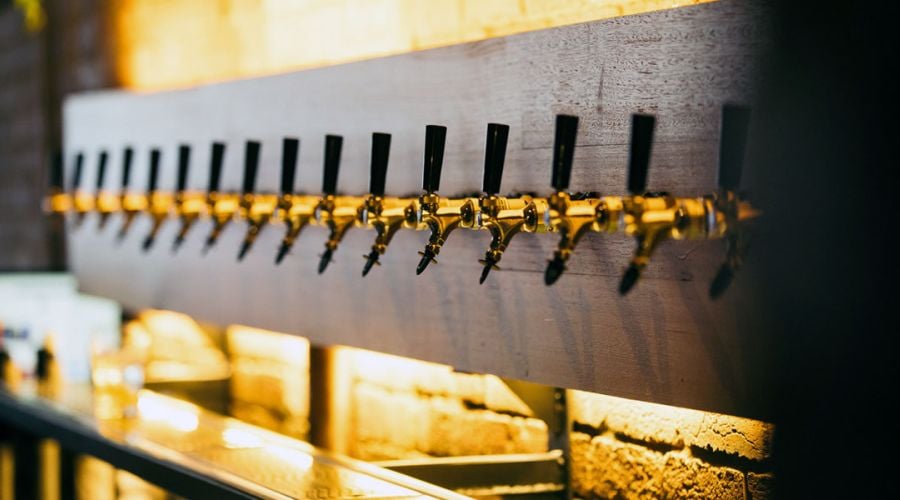 It started in 2014 in the UK, when Jason Cameron saw there was no good Aussie beer on offer. He set about remedying the situation, then bringing beers the other way, and now has opened Near & Far to showcase them all in Fitzroy. read on