In last month's selection of ten of the best new brews from South Australia in 2014, the Icon – a hoppy India lager (of sorts) – from Little Bang appeared in the list. Very few readers would have heard of the brewing company as it had only just launched its first three beers.

In fact, when the article was published the brewers celebrated as it was their first ever bit of media coverage. And now, with the business just two months old, here's their second as we invite the bearded duo to be the third new brewing company to appear in our Who Brews...? series.

Fil and Ryan. A couple of bearded, bespectacled Adelaide geeks. We worked together making video games for Ratbag Games, then Krome Studios. When the Australian games industry fell apart in 2010, Fil got himself a trade as a Refrigeration Mechanic (very handy), and Ryan went to work at his local bottleshop, which led eventually to becoming the first sales rep for (now) Aussie craft beer heavyweights Palais Imports.

We both started brewing independently, driven mainly by a desire to keep beer costs down without having to drink crap. Along with another games industry mate, Iain, we all discovered each other's brewing activities, and started brewing together.

There began a few years of passionate debate, great and not so great beers, big dreams, and eventually big plans. 18 months of designing, building, testing, and a ton of bureaucracy later, we put down our first 500L batch, and here we are.

In Fil's shed, right in the middle of South Australian suburbia, with just enough room to squeeze between the kettle and the cool room. We decided not to go the contract route but to build our own brewery from scratch and on the cheap. We've used mainly wine making equipment (which doesn't carry quite the same premium price tag as Genuine Microbrewery gear), and second hand bits and pieces we've found along the way.

Our setup is very, very manual. It's hands-on every step of the process, and we like it that way. Every time the beer moves, or heats up or cools down, we're right there watching it happen. Our vessels are flat-bottomed, rather than the usual conical unitanks, which means all our beers spend time conditioning on lees, and that we make a HUGE mess when it's time to clean them. We also naturally carbonate everything via a secondary fermentation, which lends another layer of complexity to the finished beer. It's not so hi-tech, but it works, and it's ours. 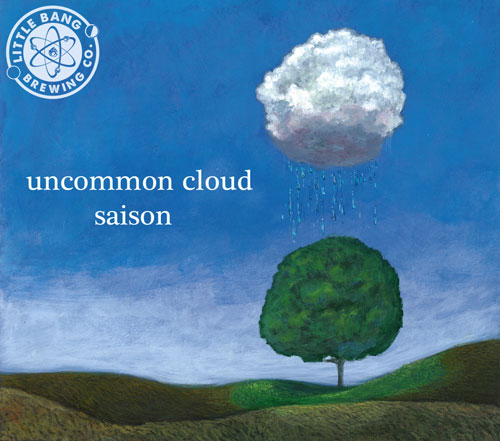 We launched with 3 beers, despite much learned advice to the contrary. Driven by ego and an inability to choose which should go first, we brewed:

We honestly can't remember. I think it was simply a process of elimination. We spent about six months cycling through every possible combination of up to three words, with the words Brewing Company after it, and this was the combination we hated the least. It's a bit geeky, like us, and we got a cool logo out of it. Most importantly it's not desperately macho, there's just too much of that crap in the beer world, and we're firmly on the other side of that fence, with all the girls and the nerds. Much better company.

You can drive yourself crazy with branding. With three beers out there and a few more ready to roll, I think we've settled into a comfortable place for us in terms of branding things. If it makes us laugh, or think, or pleasantly distracts us for a moment, and we both feel that way, we run with it. We're not hugely concerned with remaining "On Brand", we like to have fun with names, ideas and imagery, and we want to surprise people every time.

Where can people find you / your beers?

The Wheatsheaf Hotel, The Earl of Leicester Hotel, Jack Ruby Bar & Diner, The King's Head Hotel, Clever Little Tailor, Goodwood Cellars for growler fills, and soon to be many more, we hope.

What beers are currently in your fridge?

Ryan: A few prototypes and experiments, and I hate to sound like a fancy pants, but it is the Holiday Season: Cuvée De Ranke, Lindemans Framboise, 8 Wired Chardonnay Barrel Aged Sæson, Edge/Stillwater's Angel of Zest, Amarcord Ama Bionda, Hitachino Nest Red Rice Ale, North Coast Red Seal Ale, and the obligatory half dozen Brooklyn Lagers… I might need a bigger fridge. [Or a second. Mrs Pint loves the fact we have two at Crafty Towers...]

Fil: Three corny-kegs of experimental brews, Brooklyn Brown Ale, Schweinhund and Gasoline from our mentor, Simon at Brewboys, and a home brewed apple stout from a friend.

And which beers are most regularly found in your fridge?

Ryan: Plenty of stuff from Palais Imports, of course. Red Seal is my #1 go-to thirst quencher, or Brooklyn East India Pale. And I like to keep a saison handy at all times, just in case. North Coast's Le Merle, Brooklyn's Sorachi Ace, and To Øl's Snowball are favourites. Lots of our own experimental stuff, and… maybe some Pilsner Urquells if it's a hot weekend.

Fil: Experimental cornies, whatever Ryan says I really need to try right now, and 40-odd kilos of hops and yeast.

Thanks, guys. Look forward to sampling some Little Bang brews whenever we can. You can keep tabs on their goings-on here.

The two previous Who Brews...? features can be found here and here. If you are part of a new (or newish) Aussie brewing company or know of one that we should feature here in the future, please email us at crafty@craftypint.com with details. 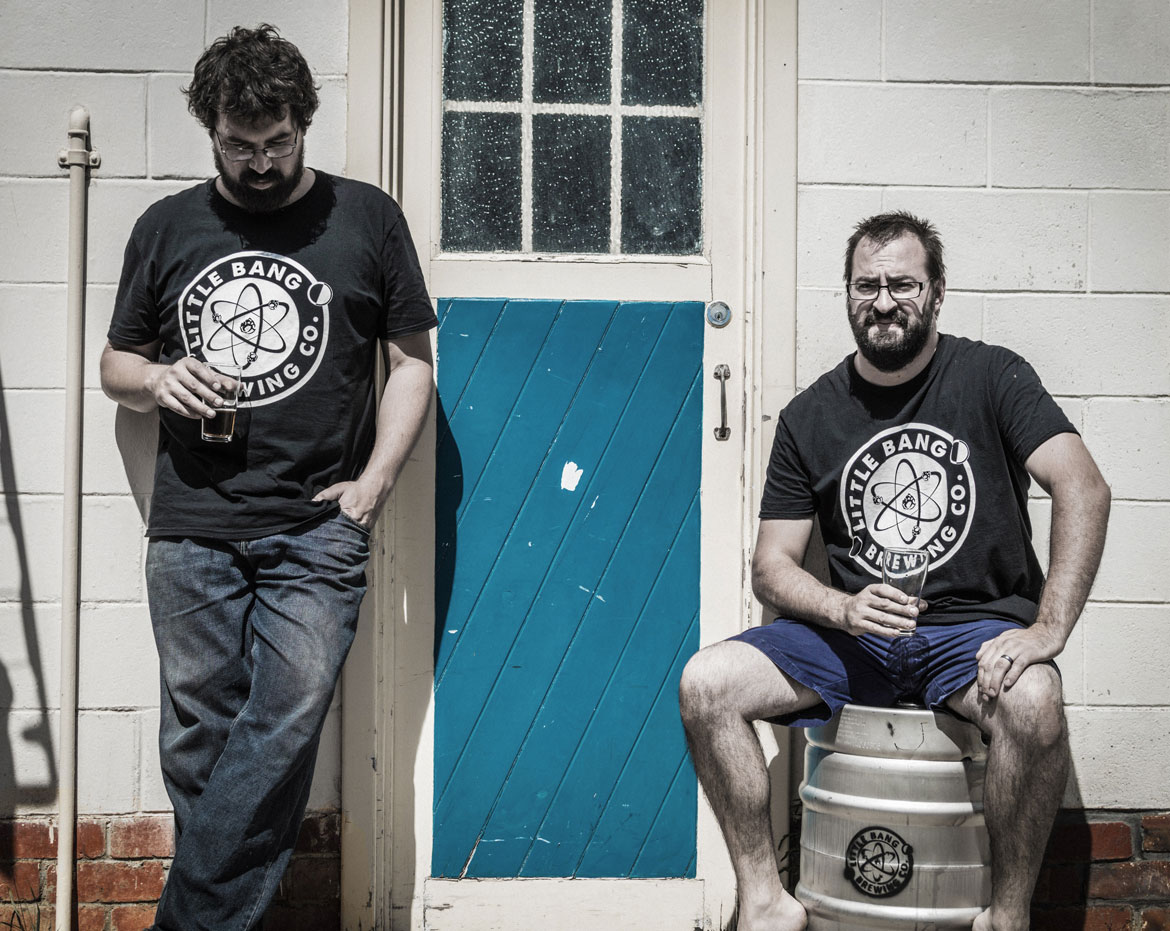 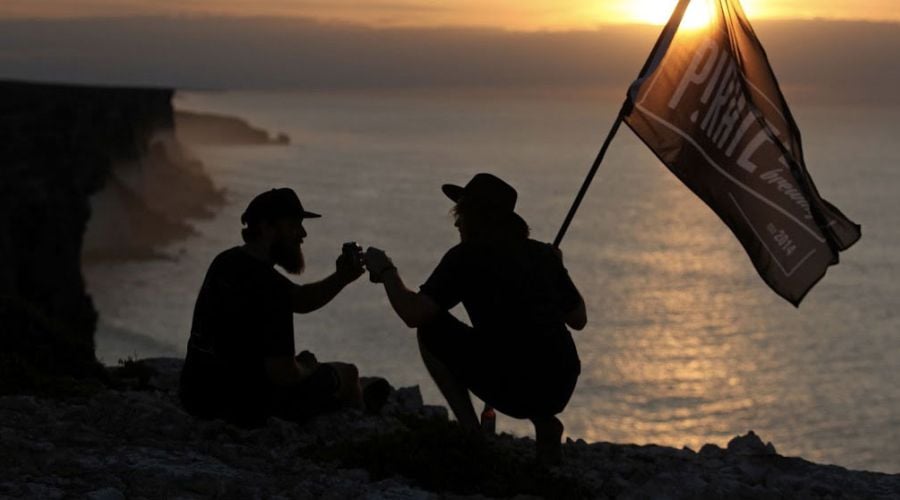