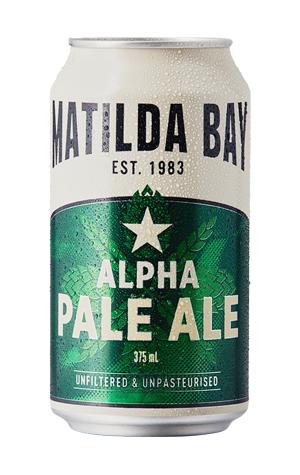 When Matilda Bay's Alpha Pale Ale was named Champion Australian Beer at the 2013 Australian International Beer Awards, it not only came as a surprise to the growing number of people saddened by the faltering fortunes of the brand, but it also felt like something of a last hurrah. The beer wasn't even part of the year round lineup anymore, shunted to the back of the family photos on billboards like an embarrassing uncle as attention was focused instead on the likes of Fat Yak. And, of course, even this prestigious trophy couldn't arrest the slide.

The serial award-winner has returned at Matilda Bay's Healesville brewpub, however, giving a new generation of drinkers a chance to sample one of the first such beers to appear in Australia. Inspired by the likes of Sierra Nevada's Pale, it's a marriage of sweeter, caramel Crystal malts and floral, citrusy and piney hops, wrapped up with a firm bitterness.

I'm not sure about you, but after sampling dozens of pales and IPAs brewed with more extravagant new hop varieties designed to deliver fruit salad punches to the olfactory system, there's a reassuring satisfaction to be found in landing upon such "old school" beers with American Cascade hops at their heart. Like returning to a well-made classic English bitter, Belgian golden ale or Czech pilsner, they're styles made to outlast trends; let's see if the reborn Alpha can do the same.