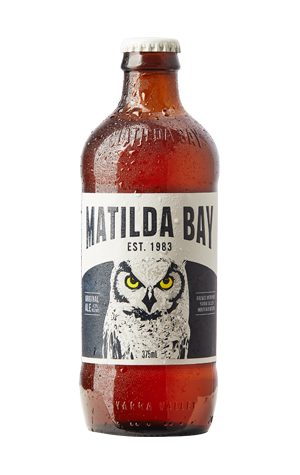 “I want to get one beer out that can be successful and that we can really get focus on. A beer I want to do and that I’m comfortable with.”

When Matilda Bay founder Phil Sexton announced he was planning to bring the brewery back in late 2019, he outlined plans for a single new beer that would form part of the lineup, alongside some of the brewery's former glories. He also told this site: “I’d like to spend a bit of time and effort on educating people about beer and what we can do with malted cereal grains, water, hops and yeast; let’s talk about balance and finesse, beers that can line up against commercial beers – they’re different but not just because they’re extreme.”

That new beer is the Owl Original Ale, named after what the reborn brewery's team call their spirit animal, the "powerful owl that lives deep in the Yarra Valley’s old growth forest", a reference to returning older and wiser. And it's certainly not extreme, hewing to age-old traditions and, indeed, showcasing balance and finesse.

It's been tagged classic Australian pale meets European golden ale and, for me, sits more in the latter camp. If anything, the use of East Kent Goldings and Styrian Goldings hops atop a soft, almost creamy biscuity malt base brings to mind the sort of English real ales Phil would have enjoyed in his days training as a brewer in England, adding a little fruitiness and a hint of spice to that blanket of malts. At the same time, you can detect elements of other everyday ales from parts of Northern Europe too.

The result of 27 trial batches – how off-trend! – is a highly drinkable, balanced, nuanced beer designed to pleasure one's palate without working it too hard.