Anyone with even a passing interest in the history of beer in Australia will be well aware of the crucial role played by Matilda Bay. Launched in 1983 at the height – or nadir – of the industry’s domination by a handful of large brewing companies, the brewery is rightly recognised as ground zero for the contemporary craft beer world we’re lucky enough to enjoy today.

It wasn’t just the variety of beers they brought to drinkers starved of choice that made Matilda Bay so important either. The founders showed another, better, more welcoming way to run pubs, going on to run dozens across the country after honing their skills in WA, and proved to be grand disruptors as much as far-sighted innovators.

Beers like Dogbolter and Redback grew from cult favourites to Aussie icons. Even after a hostile takeover by what was then Foster’s, and a subsequent relocation of the brewery’s home to Dandenong in Victoria, Matilda Bay kept looking to push local palates in new directions, whether through one of the country’s first saisons or classic American pale ale Alpha, with Brad Rogers at the helm before he left to found Stone & Wood with a couple of CUB colleagues.

Yet the good times weren’t to last, and the once mighty did indeed fall. That said, fall isn’t really the best term, as it was more of a long, drawn out fade into irrelevance; as the craft beer world it had helped create finally burst into life, the Matilda Bay name was attached to a series of beers best left forgotten; Itchy Green Pants, anyone? Dare we even mention Frothy?

While the Yak Ales lineup the brand had spawned took on a life of its own, Matilda Bay became rather sad. The brewery had been moved from Dandenong to Port Melbourne with grand plans only for CUB to sell the whole shebang to Colonial. And with countless beer lovers still clinging to the faint hope this essential piece of Australia’s rich brewing tapestry could still be turned around, eventually it became clear it was kindest to let it rest in peace, to remember the good days and, just maybe, pretend most of the later years never happened.

Where it had ended was so far from where it started out. Surely there was no coming back. Unless…

Wind back a few years and when I was drafting my first book on the Australian beer scene I spent a few hours in the company of Matilda Bay co-founder (and founder of much else in beer, wine and coffee) Phil Sexton at the Giant Steps winery in Healesville. The main reason for our catch up was to go over the early years of Matilda Bay, the Sail & Anchor, and the rise (and fall in many cases) of microbreweries in the 80s and 90s.

When we moved to the present, as it was then, he said if he was to start a brewery again, he’d do it there: in the Yarra Valley. And now he has, albeit you’d call it a reboot as much as a startup.

You’d also have to admit it’s the only conceivable way in which Matilda Bay had any chance of resuscitation: the return of its original leader, on a mission to reclaim its heritage, its reputation, its honour.

Making the process easier was the fact he had a place in which to base the rebuild: the aforementioned former home of Giant Steps. At time of writing, the transfer of the winery from the rear of the building to a nearby vineyard was still a work in progress, but the remainder of 336 Maroondah Highway is now very much Matilda Bay, and very much a brewpub.

Sure, structurally it’s the same high-ceilinged, light-filled space, with the kitchen where it always was, still pumping out delicious wood-fired pizzas and other dishes showcasing local produce, and the verandah remaining as good a place as ever to settle when visiting the Valley. But otherwise it’s pretty much all beer: from the fridges full of cans and bottles, the stacks of cases and the branded merch in the shop, to the 20 hectolitre brewery in the Beer Hall at the rear, complete with a vast mural described as the contents of Phil’s mind made into art.

The bar pours Matilda Bay’s core lineup plus the odd seasonal – there’s no unlimited limiteds here – and some guest beers from local indies. The visual palate, such as the tiles lining the island bar that greets you when you walk in, feels very Matilda Bay, even if nobody really knew what Matilda Bay was for years, and the long tables running alongside the brewery are just crying out to host lively beer dinners.

Adding to the vibe are the nods to Phil and his team’s passion for music. John Coltrane’s Giant Steps album features within that giant mural, while old gig posters catch your eye when you’re on the way to attend to nature. What’s more, it’s the only Aussie venue to date in which I’ve heard tracks from Super Furry Animals frontman Gruff Rhys’ concept album about Paektu Mountain in North Korea.

Of course, a pretty venue, delicious pizzas, and good taste in music aren’t going to see Matilda Bay reclaim former glories, no matter how central an excellent hospitality offering was to the success of the early years. You’re going to need to make, and sell, some pretty good beer. On that front the approach has been to lean on the brewery’s heritage rather than start anew – and when you’ve got recipes stretching back to a mere four years after Sierra Nevada launched their first beer, why wouldn’t you?

Thus, at the heart of the new Matilda Bay are nailed-on classics from the old Matilda Bay, those Phil believed stood the test of time. Dogbolter returns as a “winter ale”. Alpha – an AIBA Champion Australian Beer as recently as 2013 – fills the pale ale slot. Redback has been given a nudge towards modern Aussie pales without losing its Euro wheat soul, now called Redback Summer.

The main new beer, flagged up by Phil in interviews ahead of the brewery’s reopening, is the Owl Original Ale, which takes inspiration from the classic English golden ales Phil enjoyed in his early CAMRA days in the UK and sprinkles in elements of other easy-going Northern European ale styles.

There was a saison on tap and a limited release Pils brewed for Oktoberfest when I called in during spring 2021, so you should be able pick up the theme pretty easily. It’s as if the brewing team – which at time of writing featured, among others, Phil’s son, a former distiller, a winemaker, and one of the industry’s most experienced consultants – has scoured the world for timeless styles and set about recreating them for the Aussie market.

It all makes so much sense, it’s a wonder things managed to go so awry in the first place. Where the new Matilda Bay will end up sitting with the modern beer world it helped birth remains to be seen, but if the main reason for this new chapter was to reclaim the brand and do it right, it’s safe to say they’re off to a fine, and refined, start.

By the time Matilda Bay released their first new beer following the return of founder Phil Sexton, they'd tipped 27 trial batches down the drain. Now they're offering drinkers a chance to try four of the beers that didn't quite make the grade. A few days before receiving samples of this beer, we posted near-identical pieces on Aussie wheat ales from Matilda Bay's CUB/Asahi stablemates Green Beacon and Pirate Life. It was our way of pointing out what seemed to be a coordinated move by the brewing giant and Endeavour Group (Dan Murphy's, BWS etc) to create a new, well, style for 2022, something that has since been confirmed in media reports. In those pieces, we pointed out that Matilda Bay had only just released their own Aussie Wheat Ale;… Read more
Pale Yellow Dogbolter is a name with a long, storied history. Chat to those around in its early days, back when it was a higher ABV strong ale, and there's a good chance they'll have some colourful tales to tell about its impact. Over time, however, it was reined in and refined to become a celebration of the darker joys in beer, and it's as such an offering that it's returned as part of the reborn Matilda Bay's lineup. Hersbrucker and Aussie Enigma hops are there to contribute some subtle spice and the beer's… Read more
Dark Brown When Matilda Bay's Alpha Pale Ale was named Champion Australian Beer at the 2013 Australian International Beer Awards, it not only came as a surprise to the growing number of people saddened by the faltering fortunes of the brand, but it also felt like something of a last hurrah. The beer wasn't even part of the year round lineup anymore, shunted to the back of the family photos on billboards like an embarrassing uncle as attention was focused instead on the likes of Fat Yak. And, of course, even… Read more
Golden 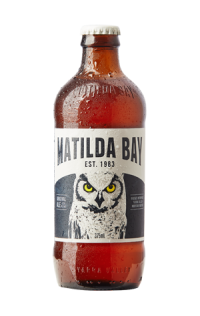 “I want to get one beer out that can be successful and that we can really get focus on. A beer I want to do and that I’m comfortable with.” When Matilda Bay founder Phil Sexton announced he was planning to bring the brewery back in late 2019, he outlined plans for a single new beer that would form part of the lineup, alongside some of the brewery's former glories. He also told this site: “I’d like to spend a bit of time and effort on educating people about beer and what we can do with malted… Read more
Golden If you've been enjoying Australia's craft beer scene for a couple of years or even a decade or more, you might find it hard to believe a traditionally-minded European wheat beer was once the beer changing tastes in the way, say, Little Creatures Pale, Feral Hop Hog, or Stone & Wood's Pacific Ale have done more recently. We've probably commented on Australian drinkers' reluctance to embrace the delights of such beers as many times as we've written about the release of a new one, yet that's exactly… Read more
Golden Yellow