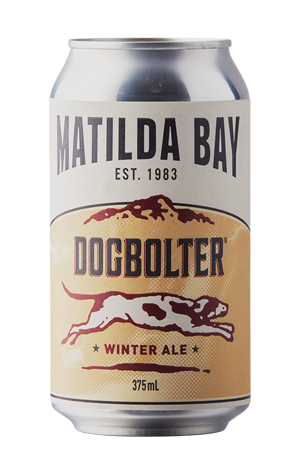 Dogbolter is a name with a long, storied history. Chat to those around in its early days, back when it was a higher ABV strong ale, and there's a good chance they'll have some colourful tales to tell about its impact. Over time, however, it was reined in and refined to become a celebration of the darker joys in beer, and it's as such an offering that it's returned as part of the reborn Matilda Bay's lineup.

Hersbrucker and Aussie Enigma hops are there to contribute some subtle spice and the beer's drying bitterness, but as much as anything it comes down the speciality roasted malts from Germany. It's they that lend the beer its mahogany hue with dark red highlights, its chocolate and caramel aromas and flavours, and aid with that drying finish. If you know anyone still holding onto the belief a dark beer can't be refreshing and sessionable, Dogbolter is as good a place as any to put them right.