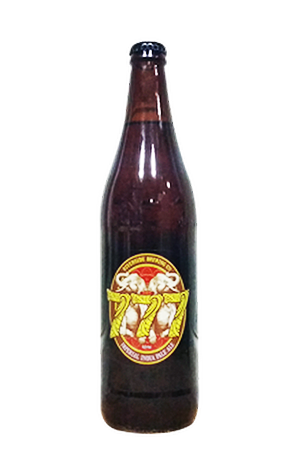 At the tail end of 2013, Parramatta's Riverside Brewing Company quietly released a new beer. It was just a small test batch but, characteristically for the hop-heavy brewery, made up for it by being a very big beer: the 777 Imperial IPA. It was also notable for the disproportionately large impact it had on Sydney hop-heads, sending their hearts all a quiver and being lauded by the lucky few to get their hands on some. So it's very welcome news that the 777 has returned; bigger, with more bitterness, and more of it to go around.

Having twice dabbled in double IPAs – once for their first birthday Celebration Ale and again for this beer's aforementioned pilot batch – Riverside's 777 v2.0 has bulked up and weighs in at a hearty 9.2 percent ABV – not that you'd know it from the ease of which you'll finish your glass. The beer uses four hop varieties, with particular emphasis on the US hop Mosaic (which they'd previously used to good effect in the one-off Resurrection Ale). Those give exactly what you want from any top notch IIPA: citrus notes as ripe as fruit straight from the tree and a whole forest's worth of pine character.

Having made a huge impact on the local scene with beers like the 44 Amber Ale and 77 IPA, the release of 777 confirms that, in the realm of fresh, highly hopped beers, Riverside Brewery can seemingly do no wrong. Indeed, if 666 is the number of the beast, the Riverside 777 has been blessed with a touch of the divine.