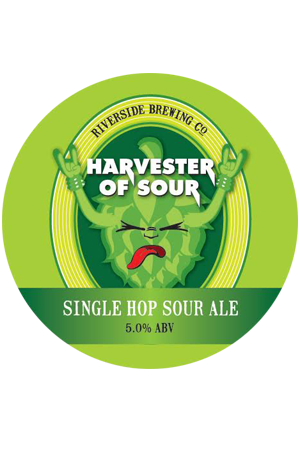 It’s fair to say that 2015 was a fairly quiet year for the Riverside Brewing Company. After their co-founder and head brewer departed just before the beginning of the year, the business more or less concentrated on keeping things ticking over, bedding in a new brewing team, making slight tweaks to the core recipes and rereleasing a couple of old favourites. In terms of brand new beers, there was only the Tzar imperial red ale to report on. But 2016 already seems set to be a bigger year for the team out at Parramatta with the first release, Harvester of Sour, being a single hop sour ale that’s quite different to any other beer that’s come from the brewery since its inception.

To attempt do justice to the effort in the beer’s creation, we’re going to try and get technical, so if you’re not interested in the process of a sour mash, it’s probably best to skip to the last paragraph…

Honed first on a very small scale by brewer Damian Iowa it used something akin to a traditional method where a converted mash is soured during ferment, with the goal of gauging the amount of souring grain and time required to hit the appropriate pH level. Once achieved to a satisfactory level, they moved the tiny batch process onto the slightly larger pilot system which involved two parts: a “sour” part and a “main” part.

The souring part was typical: mashed, cooled, grains added (with souring bacteris lactobacillus naturally present) and incubated for three days to let the lacto “go nuts” then the wort was lautered for later blending. The main part consisted of a mash plus the addition of Waimea hops, then lautered with the addition of more hops. The sour wort was then blended in and put on a short boil before more Waimea hops were added. Then, after the cool and ferment, yet more Waimea hops were added. To reach a commercial batch size, they had to replicate this rather involved pilot batch process on four separate occasions, lautering into kegs until the liquid was needed. This alone took the brewers two weeks.

The resulting beer is hazy, rampant with sourness and bursts with the zing of citrus fruit. At five percent ABV it’s got substance, though it’s clean and refreshing too. Above all Harvester of Sour is a welcome sign that, after a slight period underground, Riverside seems ready to stamp a bigger mark on the local beer scene again.